The Basilica of St. Francis of Assisi

It is the sacred place par excellence of Assisi, since here the remains of the famous saint are preserved and preserved. According to tradition, the Basilica rises where Francis had chosen to be buried: near the lower hill of the city of Assisi. On the upper floor is the Crypt with the Tomb of St. Francis, the beating heart of the Basilicas. The Basilica of San Francesco since 2000 has been included in the list of UNESCO World Heritage Sites. 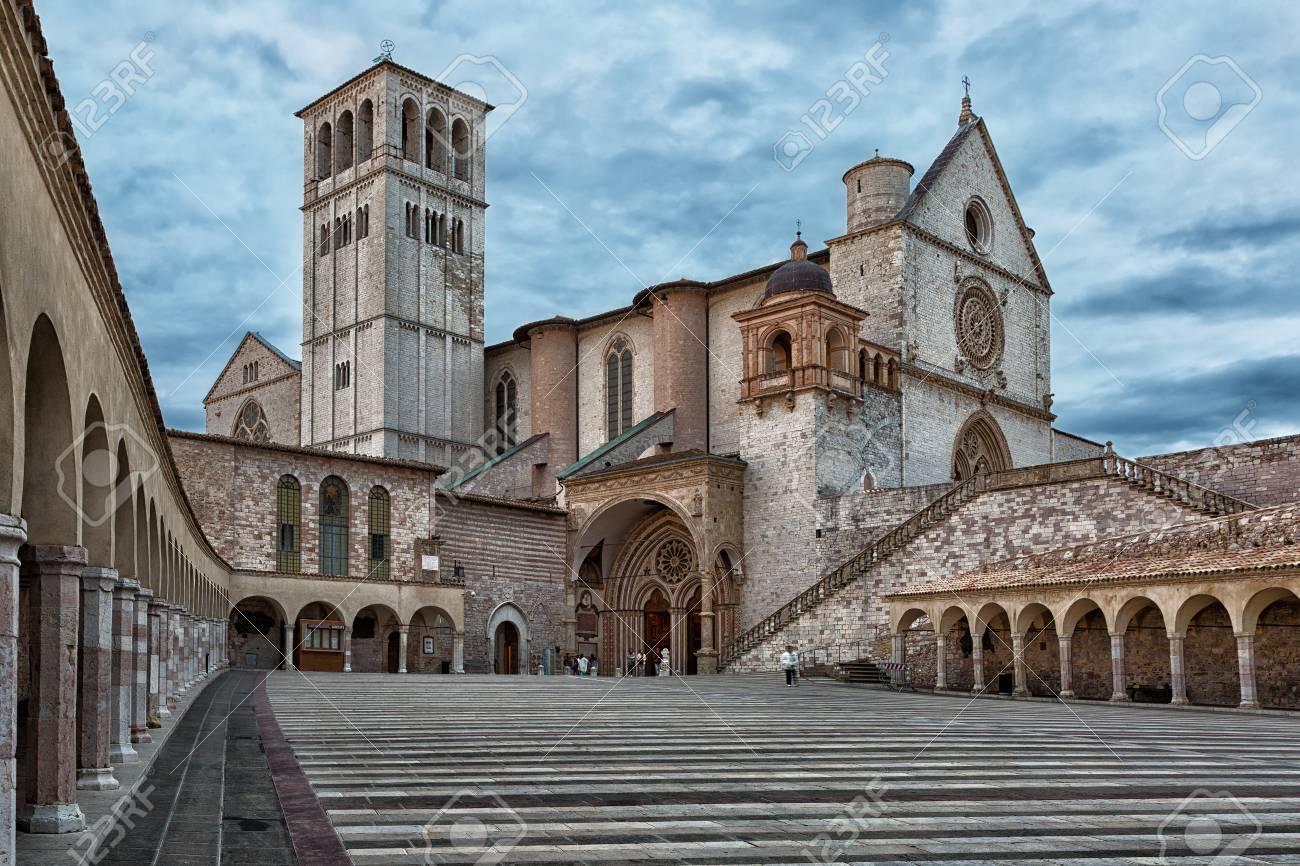 In the early Middle Ages, the cell was transformed into the church of San Donato, and then passed to the Benedictine order. Subsequently, Pope Paul III wanted to transform his interior into a Catholic church dedicated to the Virgin. The temple preserves the original façade that originally overlooked a square identified as the square of the Roman forum. It also preserves the entablature with the frieze, which in ancient times bore an inscription with bronze letters. The cell was completely destroyed during the construction of the church. 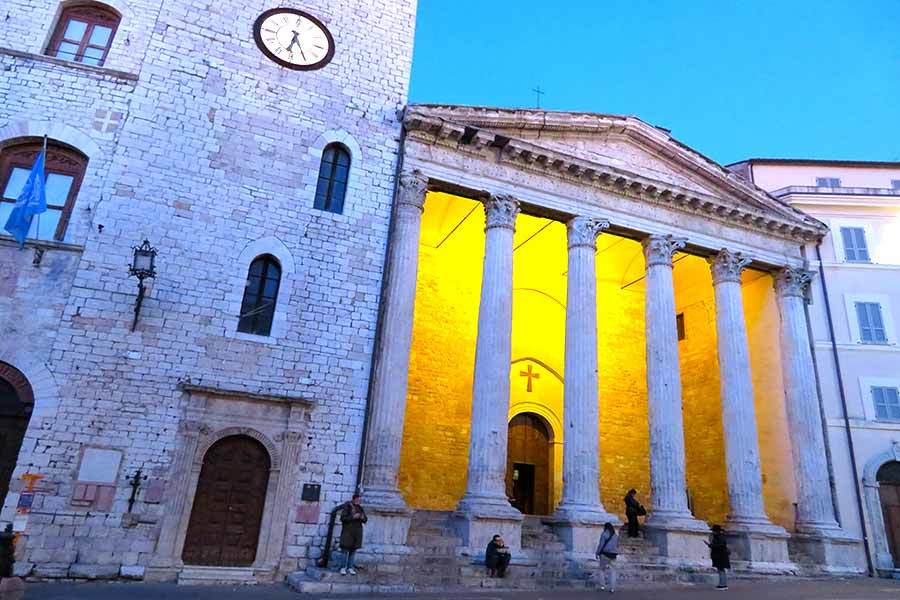 It is one of the symbolic monuments of the city of Perugia. Ut was built in different phases. The notaries' room is very ancient, which is accessed from this majestic staircase and leads to the Gothic door summoned by the Grifo and the Lion, symbols of the city. In the past it was born as the seat of popular assemblies, then it became the seat of the Arte dei Notai guild, from which it takes its current name. The vast rectangular hall is supported by eight mighty round cross-shaped arches and stalls and seats have been arranged along its perimeter, reconstructed on the original sixteenth-century models. 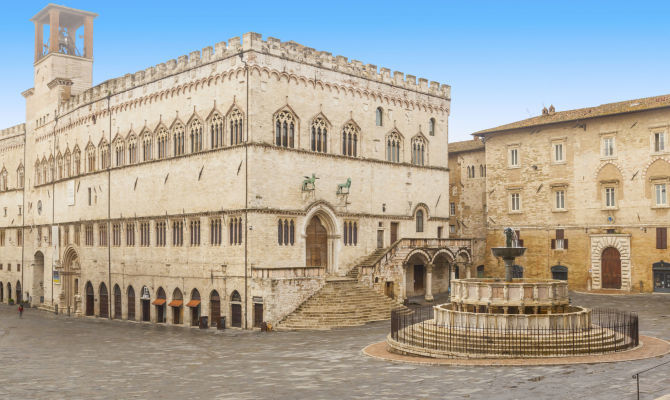 The Cathedral of Orvieto

One of the most beautiful cathedrals in Italy, a masterpiece of Gothic architecture in central Italy. The construction of the Cathedral was commissioned by Pope Urban IV in 1290, in order to give a worthy place to the Corporal of the "Miracle of the Blood", which took place in Bolsena. In fact every year, the tabernacle with the sacred linen is carried in procession on the occasion of Corpus Domini, during the traditional parade in historical procession. The Cathedral strikes the visitor from the outside, with its famous and magnificent façade and it took 20 artists to create it. The whole facade is then enriched with precious mosaics. The interior is divided into three wide and bright naves, which are covered by a wooden truss ceiling. It is also possible  to admire the two chapels. 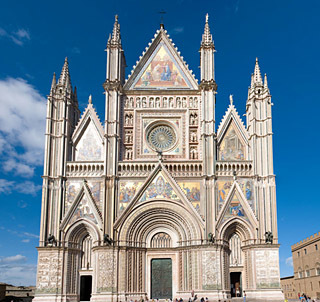 Erected in the Augustan age, Porta Venere was connected with the remains of a temple dedicated to Venus. The two Towers of Propertius with a dodecagonal plan that flank the gate and which an ancient tradition linked to the name of the Latin poet were believed to date from the Middle Ages. The towers have the name of a great Latin elegiac poet whose city of origin is still a mystery. The door dedicated to Venus is made of white travertine, decorated with pilasters in Doric order. A double door is also provided. It is so that thanks to the two towers, the wayfarer recognized from a distance the door dedicated to the goddess of love. 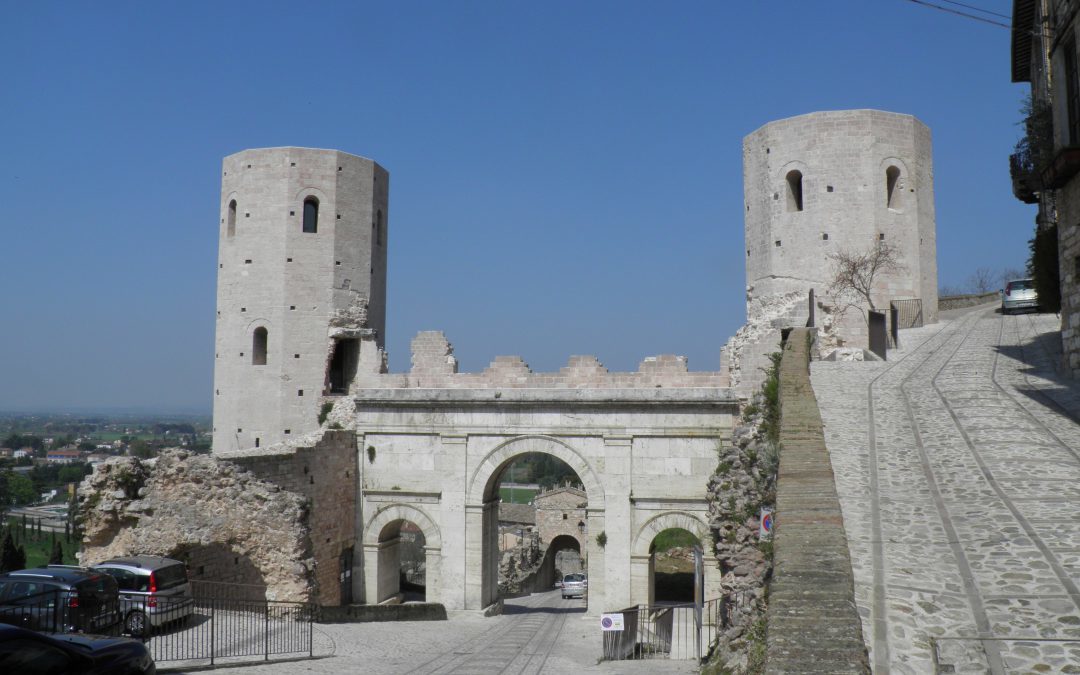 It is an architectural and monumental complex in which excavation and renovation works of the buildings found are still in progress.  It preserves a cavea which was accessed by seating. The orchestra preserves the paving in colored marble slabs and the holes for the curtain poles are visible on the proscenium. The construction of the building dates back to the I-II century AD. The amphitheater was used for gladiator games and circus shows; probably, it was also destined to the public martyrdom of some Spoleto saints who were here devoured by wild beasts. Later, the area became a stone quarry. Currently the structure of the Roman Amphitheater hosts concerts, ballets and other cultural events, especially on important occasions. 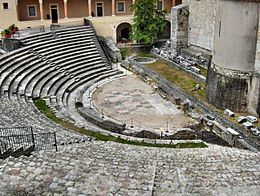 A unique and welcoming structure, located in the center of Umbria. It offers candlelit dinners with tasting menus and has always been a meeting place for an international clientele. From the cellar a selection of 400 national and foreign labels. 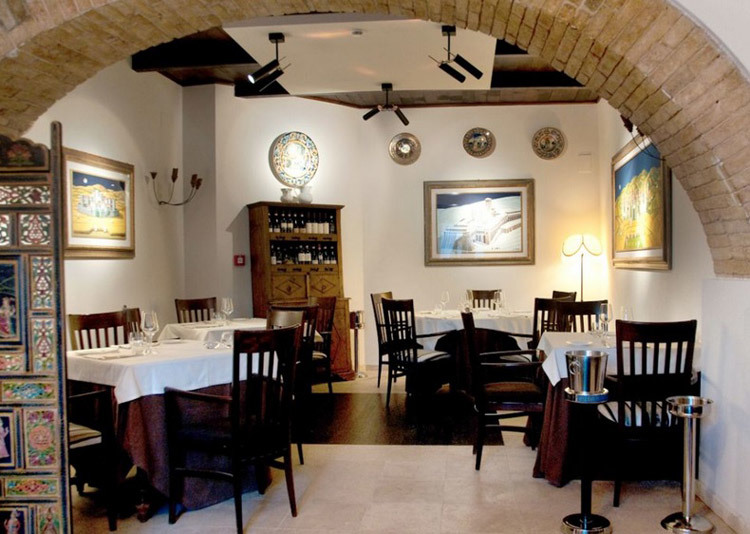 In addition to the welcoming and refined space of the internal rooms, in the summer the Restaurant "I Sette Consoli" also offers a pleasant outdoor space. The garden, intimate and silent, opens into an internal courtyard. The cuisine is mainly from the territory, strongly linked to the origins and local products; there are also fish dishes, especially in summer, to satisfy the large number of foreign customers. The winery has about 800 labels from all over the world and about a hundred distillates. 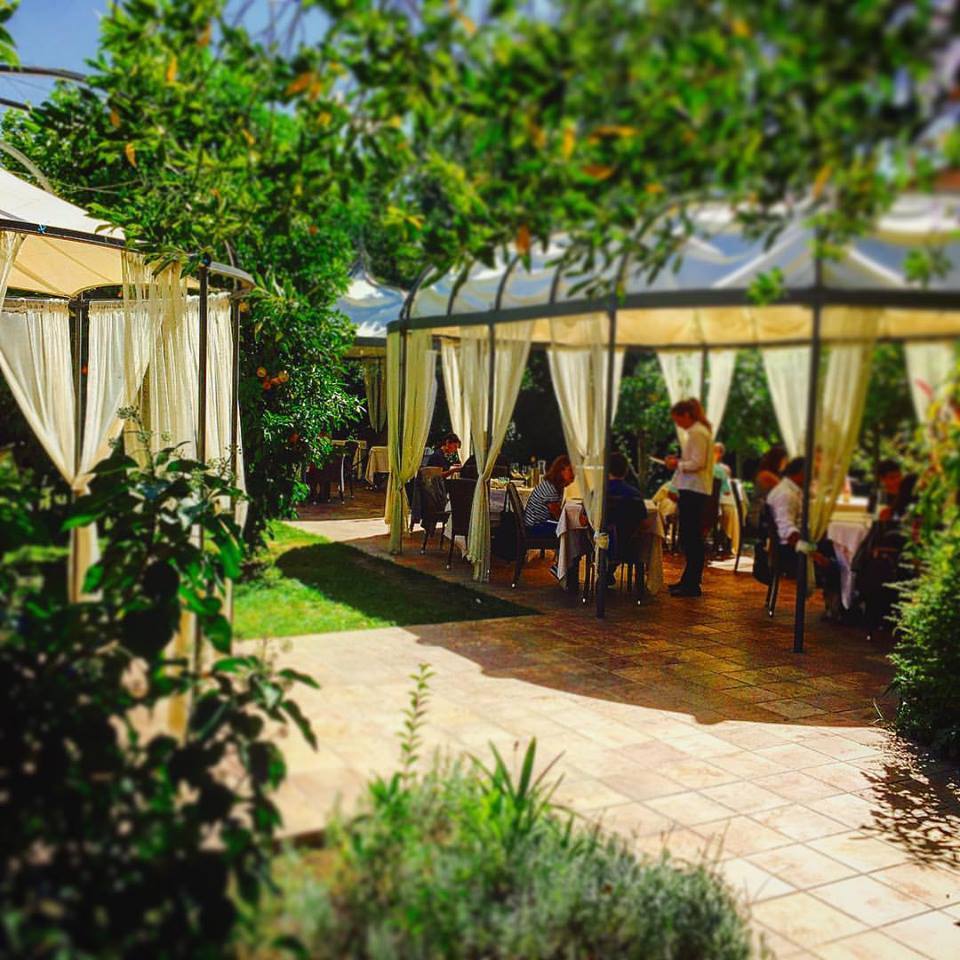 There are two very tasty versions. The first involves cooking under the ashes and a marinade that respects an ancient tradition and is based on laurel, cloves, sage, rosemary, marjoram and juniper berries.
The second is that of the dish called pigeon alla greyhound: in this case the pigeon is roasted on a spit, stuffed with entrails and served with a sauce. 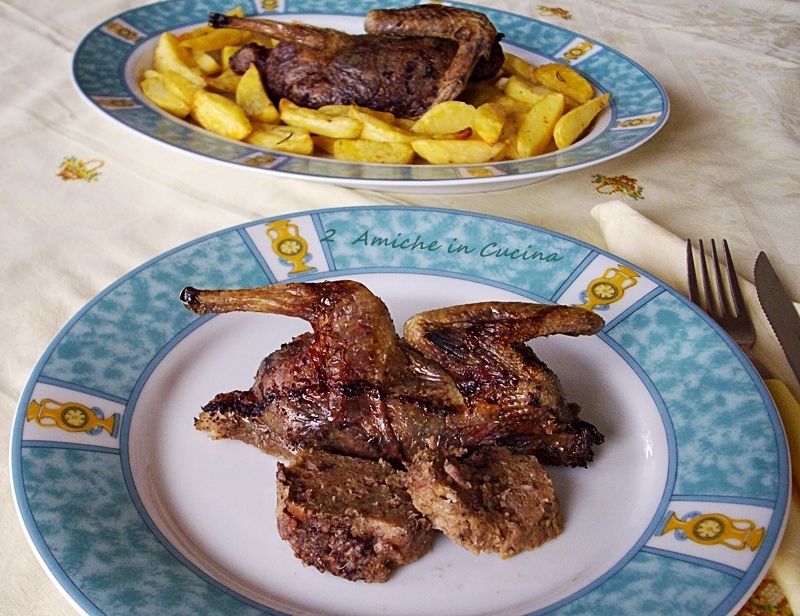 Torcolo was born as a poor dessert, prepared with simple and easily available ingredients. It is said that the recipe, based on leavened dough, candied fruit, raisins, pine nuts and anise is born from the saint from which it took its name. San Costanzo, first bishop of Perugia was beheaded during Christian persecutions by the emperor Marcus Aurelius. The story tells that the cake took the shape of a donut to remember the cut neck of the saint. 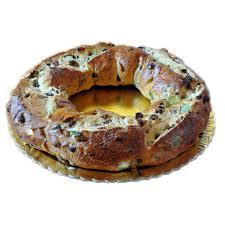 Gingerbread is a traditional Christmas party dessert. It is a dough made with melted chocolate, dried fruit (almonds, walnuts, hazelnuts, pine nuts), honey and candied fruit, which is baked in the oven. 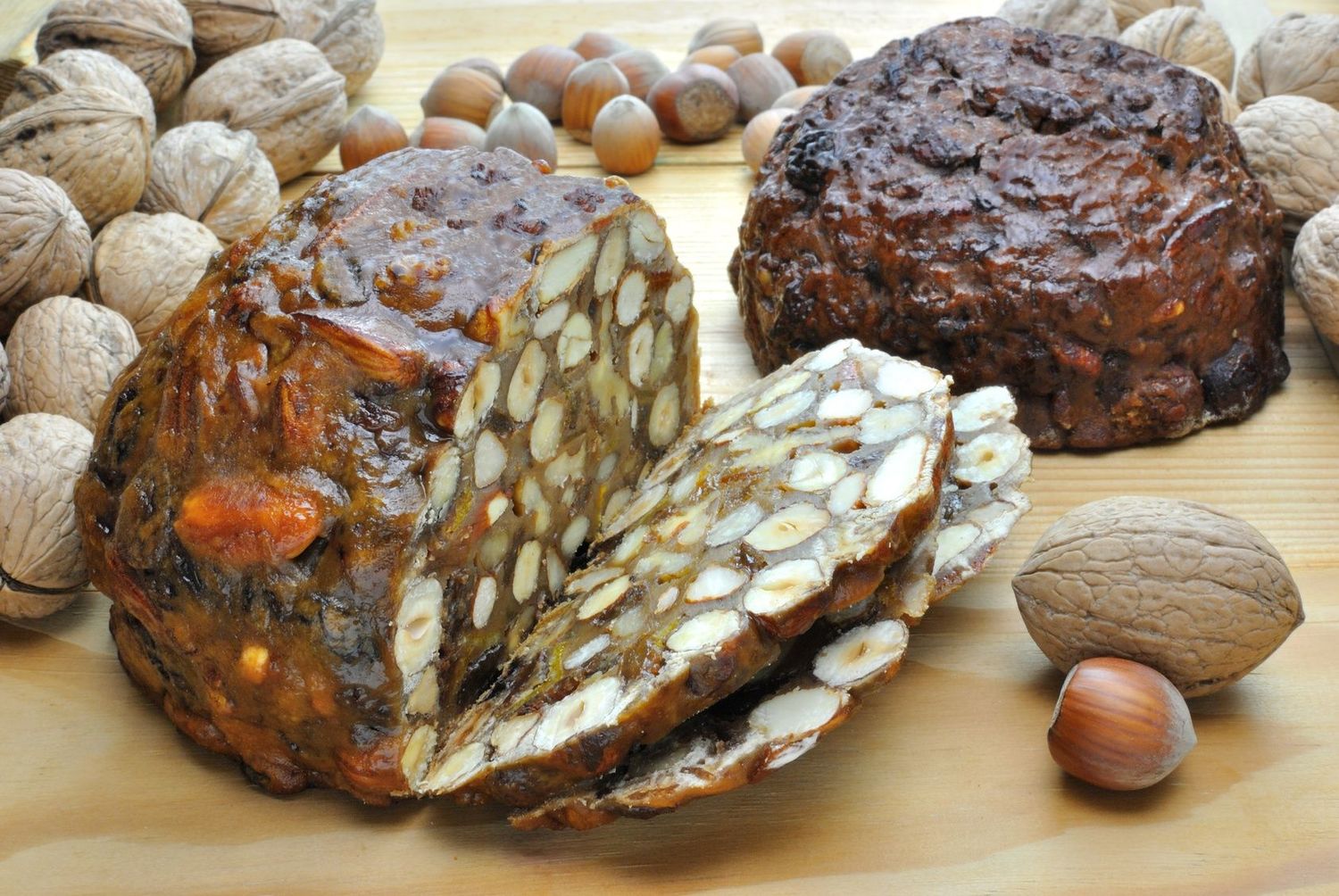