What to see in Puglia?

The best monuments in Puglia

Castel del Monte is one of the most magical places in Italy. It is located in a fraction of Andria. It is in medieval architecture but contains magic and esotericism. It is a place of secrets and magic, and an ancient 13th century building built by Emperor Frederick II. Because of the strong symbolism inside, it is thought that the fortress can represent a sort of temple of knowledge, in which to dedicate itself to the study of sciences. The first symbol is found in the sixth room where, almost hidden by a play of light, a lily with 3 leaves and a stem is carved. According to the symbol it is a portal consisting of 2 columns and 2 lions, the first looking towards the sunrise at the winter solstice and the second looking towards the direction of sunrise on the summer solstice. The third symbol is a large "F", that of Frederick II of Swabia, a figure still shrouded in mystery. 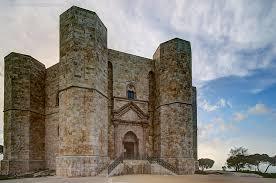 The Castle is in fact one of the most representative structures of the city of Taranto and overlooks the sea. Among the most exciting parts to visit there is undoubtedly the walk on the outer walls, from where you can enjoy an incredible landscape on the blue sea below. One of the most disturbing rooms is the torture room, especially for the large hole that crosses the vault. The forum had the task of making all the other prisoners hear the screams in order to make them scare. Inside the castle, you can admire the chapel of San Leonardo and the coat of arms of the family of Philip II of Spain. 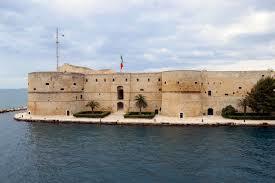 It is a complex of underground caves of karstic origin. They are 3348 meters long and the temperature is around 16 degrees. It is one of the most beautiful natural places that attracts many visitors and is a must-see. 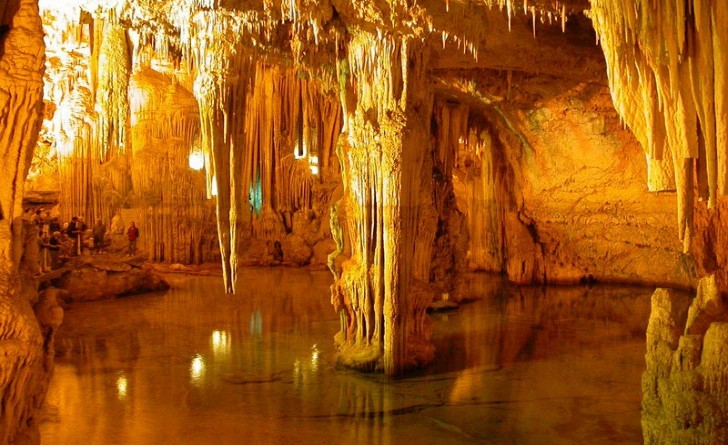 The Trulli of Alberobello

These represent one of the most extraordinary examples of Italian folk architecture. The birth of the first trulli dates back to prehistoric times. They are a type of conical construction in traditional dry stone from Puglia. The trullo was born as a typical construction of the peasants who worked the land for the master, so that he could have a place to sleep and keep the work tools. The plant is circular and on the base of rock the heavy lime masonry is grafted, the thickness of the walls and their particular shape guarantee, instead, a thermal balance. 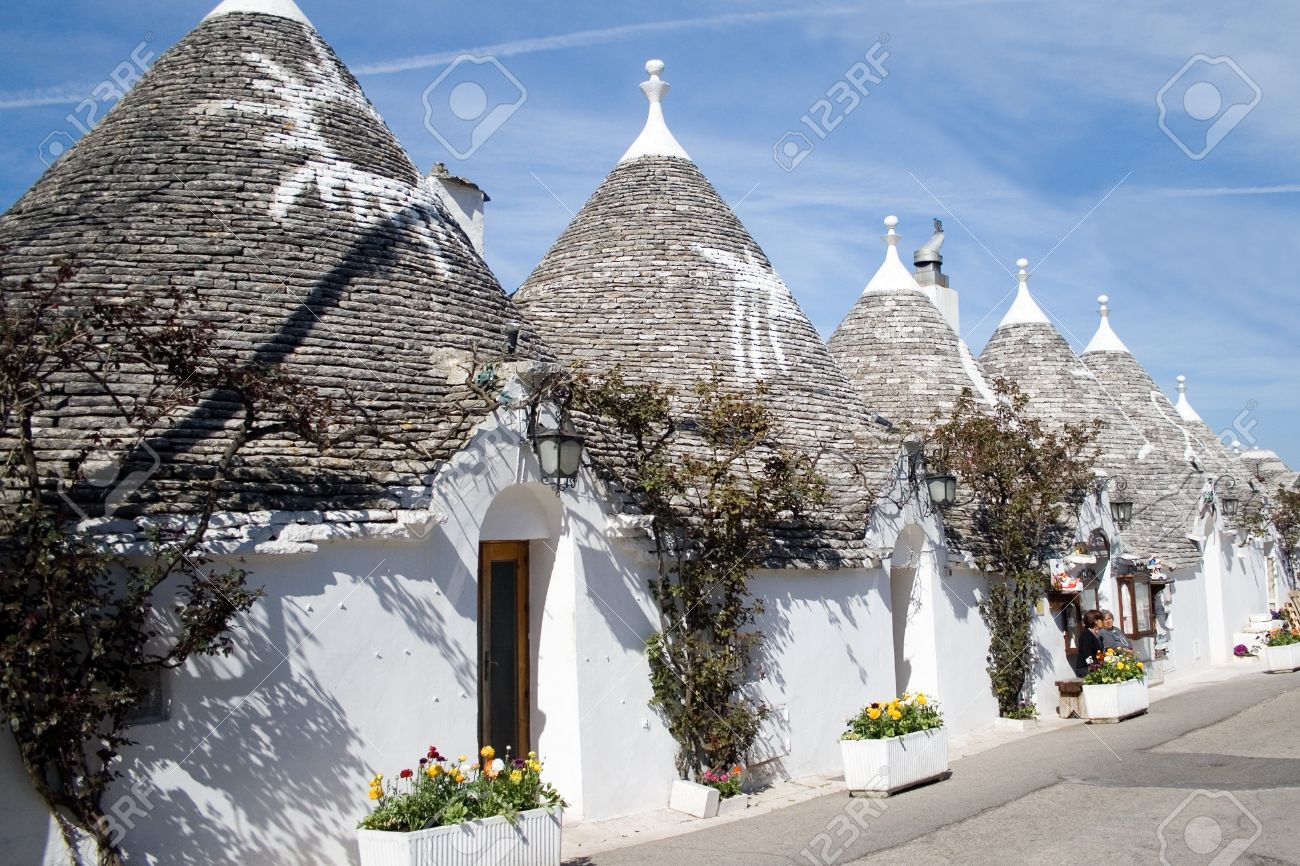 It is a Roman amphitheater located in the eastern suburbs of Lucera. It dates back to the Augustan age and is among the oldest in southern Italy. It was built at the behest of Augustus who in his period of greatest splendor ordered the construction.  The access consisted of two portals framed by Ionic columns, on the minor axis two other accesses opened up. Near the amphitheater stood the athletes' gym, some public buildings and an infirmary. 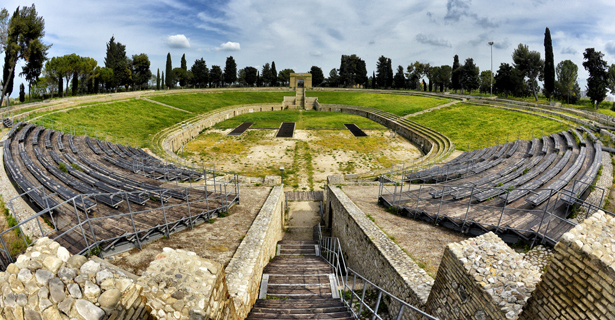 The Cathedral of Altamura

The cathedral of Altamura, one of the few sacred buildings commissioned by Federico. Not much remains of the medieval building which, according to scholars, had to have a façade also on the opposite side, with the apse embedded in the thickness of the wall, on which today the main façade opens. Outside you can admire the portal, flanked by two sixteenth-century lions with the tympanum embellished with a statue of Christ. The two large bell towers rise like arms, in the middle a magnificent rose window with 15 rays with the richly carved ring. 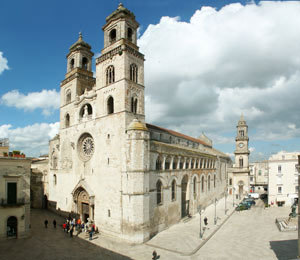 The Ducal Castle of Bovino

It is located on a rocky spur and dominates the entire valley below. The Castle was exploited on several occasions both for its strategic position on the arterial road that crossed the valley, but also as a place of residence and residence for characters and dynasties of great fame: Manfredi, son of Federico II; the Angevins, sovereigns of the Kingdom of Naples, and the Spanish family of de Guevara. Important scholars were hosted here, such as Torquato Tasso and Gian Battista Marino, and illustrious characters imcluding Maria Teresa di Austria. 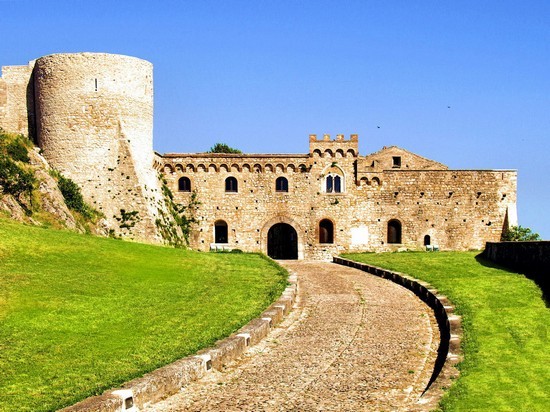 It rises in Gallipoli and is the oldest fountain in Italy. The façade is divided into three parts by four caryatids that support the architrave. In the bas-reliefs scenes are depicted that represent the three metamorphoses of the mythological Dirce, Salmace and Biblide. The myth of Dirce, queen of Thebes who, overcome by jealousy, insults her niece Antiope and was condemned by her children to be torn apart by two angry bulls. In fact it is represented on the ground between two bulls and, higher up, we see Dionysus in the act of turning it into a stone fountain. The myth of Salmace, the nymph who prayed to the gods to form a single body with Hermaphrodite of which she was in love, their naked bodies are represented chained while they are transformed into a single source. The myth of Biblide who, in love with his brother Cauno and rejected by them, wept until tears were consumed and the gods turned her into a stone fountain. Here the nymph stretched out clutching her brother's coat in her hands. 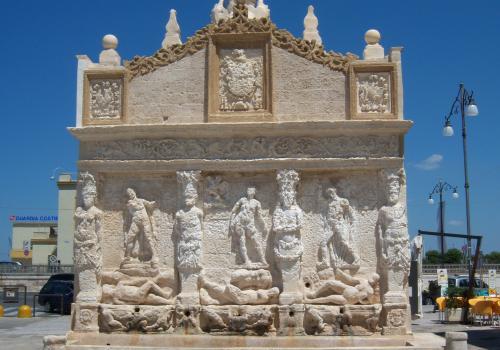 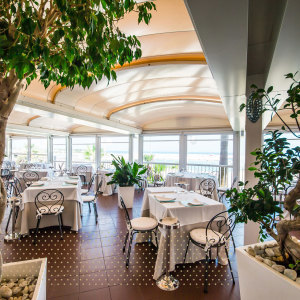 It ids located in the old town of Polignano a Mare. This Hotel, situated on a scenic cliff overlooking the sea, rests on the famous Grotta Palazzese, a cave that hosts the homonymous restaurant considered among the 10 most exclusive outdoor restaurants in the world. The terrace that welcomes customers has been created inside a natural cave. It can accommodate up to 150 people in a room that, albeit outdoors, is sheltered from the cave vault. 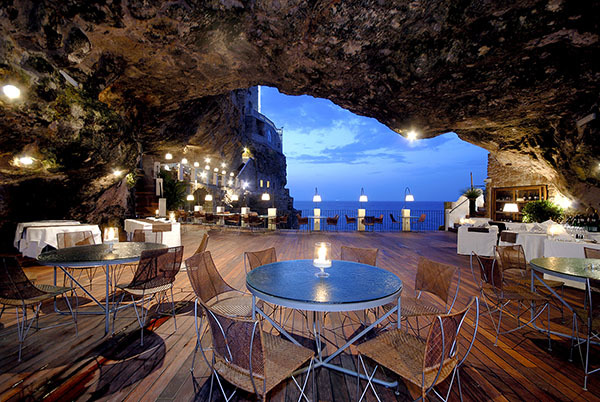 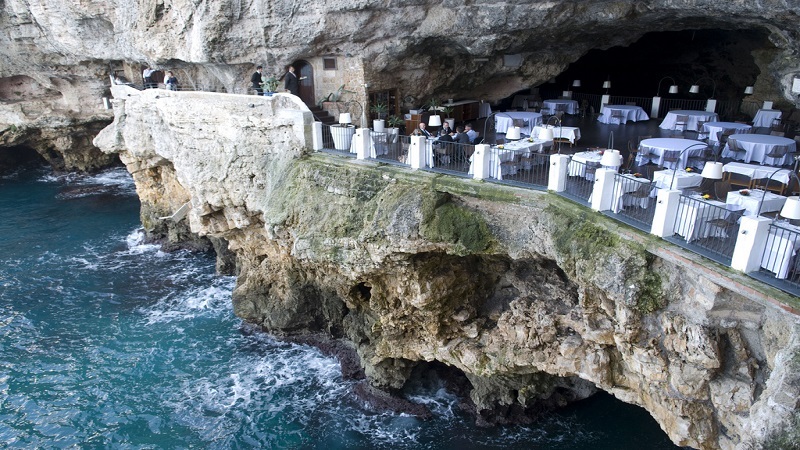 Restaurant "Tavern in the Cathedral"

It is located in the old town of Vieste. The room dates back to 400 and is made entirely of stone with 4 very large rooms. The menu is varied and offers a lot of typical dishes of the territory, fish prevails a lot but there are also tempting meat dishes. 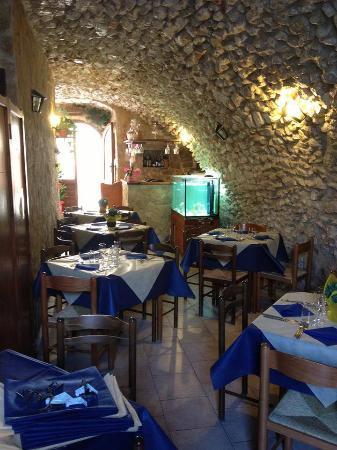 The focaccia from Bari

The focaccia from Bari is a leavened baked product typical of Puglia. The base of the focaccia is obtained by mixing remilled semolina, boiled potatoes, salt, yeast and water. There may be the addition of peppers, aubergines, onions or other vegetables. 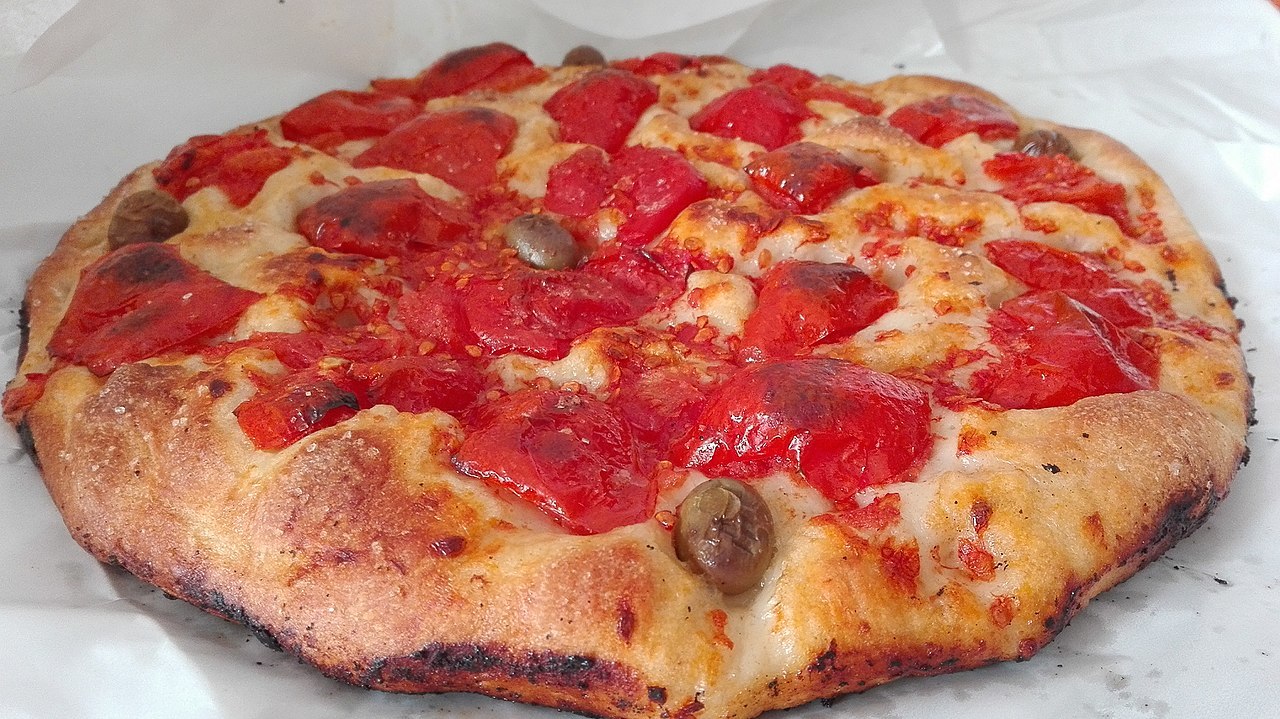 It is the first dish symbol of Puglia. The orecchiette are cooked in boiling water along with turnip tops to better absorb the aromas and then are stirred with a tasty fried sauce made with anchovies in oil or pork sausage. 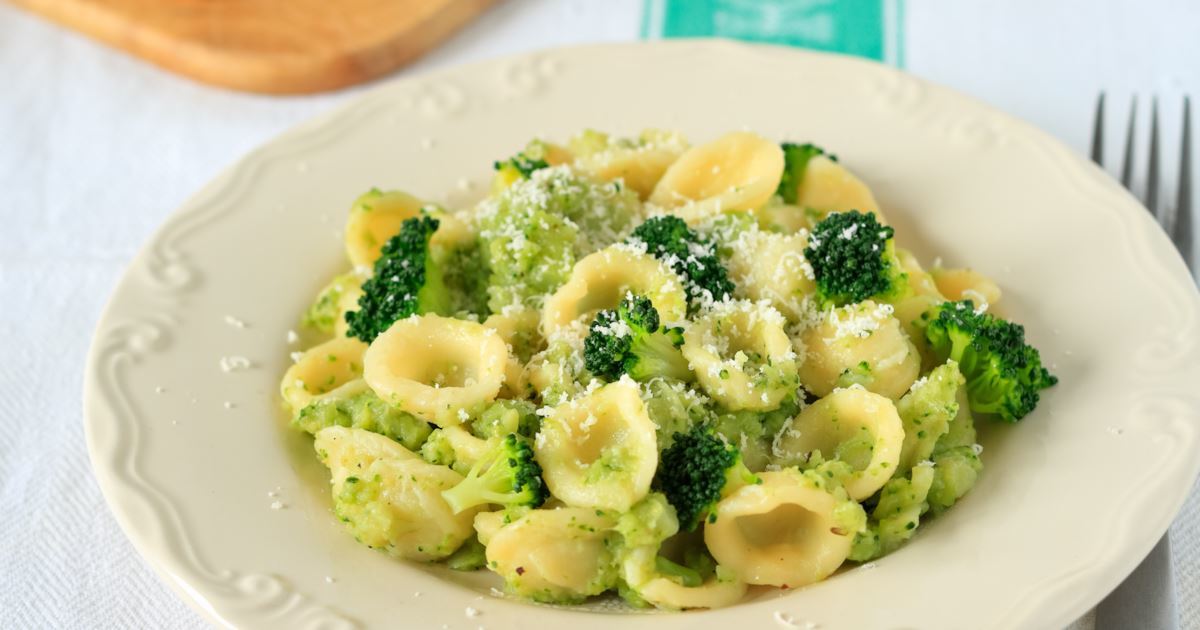 They are a culinary recycling dish because stale bread is used. They can be cooked in the oven or in hot oil. 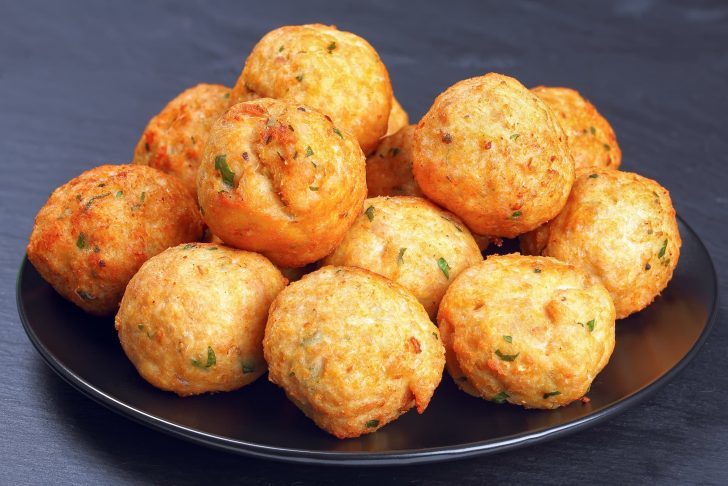