What to see in Abruzzo?

The best monuments in Abruzzo

It is an ancient Roman city which has now become an archaeological site to be explored. Structured as a typical Roman fort, the city develops along a grid of thistles. It is possible to visit the remains of an ancient Roman domus divided into rooms with mosaics, dry stone walls and columns from which one can walk. You can also admire the market, the thermal baths with mosaics of marine figures, both meschile and feminine baths and the sacellum of Hercules. Under ground while a sewer system has been discovered. Important is the church of San Pietro which still preserves sculptural testimonials. 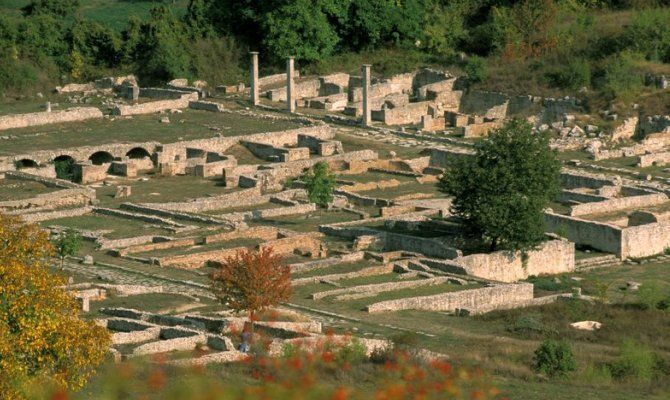 The Basilica of St. Pietro of Collemaggio

The external façade is considered the maximum expression of the Abruzzo architecture. The main door has round arches, while the side doors have a neo-Romanesque style. The interior space is divided into three naves, and the roof is in wood. The apsidal area has two side octagonal tribunes while the central one is octagonal. The choir is in Gothic style. 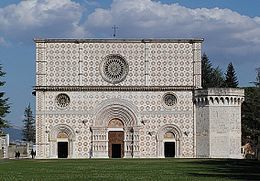 The Abbey of St. Giovanni in Chieti

The toponym linked to Venus derives from the presence of a pagan temple in honor of this divinity in the place where the abbey was later built. In the fourteenth century the abbey began to grow poorer and had to sell many of its assets. With the birth of the Kingdom of Italy the abbey was declared a "national monument". t has three naves divided by arches. The main facade houses the rich Portal of the Moon, a door entirely in marble, decorated with recycled materials of ancient origin. On the south side is the Portal of Women, used to enter. Next to it is the bell tower. It was also equipped with a cloister, still partially visible. 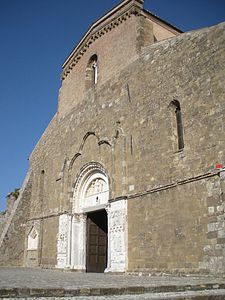 At first it served as a lookout tower, later it was fortified with walls and used for military purposes. In 1703 an earthquake devastated it and the population was forced to leave the territory. Over the years, however, the territory became a destination for shooting films and the castle was structured and is a tourist destination. The castle was built in white stone and is composed of a central male and a circle of walls and four corner towers. The castle, damaged by earthquakes, was subjected to a series of restorations. 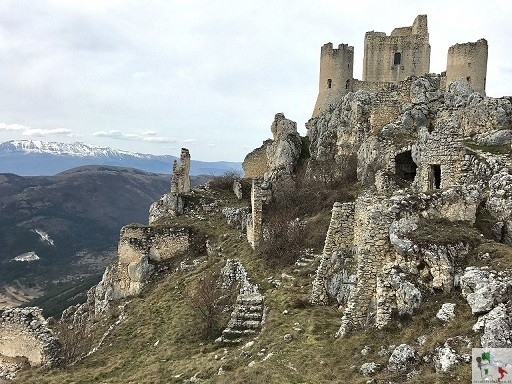 The origins of the castle are linked to the Lombards. According to the documents found, in 1320 the fortress already existed but there was never any news. In 1940 there was a heavy collapse which affected the tower but was restored and can now be visited. Like every castle there is also a legend concerning the Ius primae noctis, that is, when there was a wedding, the bride had to give herself first to the feudal lord. Legend has it that when this practice was reintroduced, a husband dressed as a woman or a jealous woman entered the castle and stab the gentleman. But the dying baron left his bloody mark on the tower to which he was clinging. When the tower collapsed this shot, but the elders remember this testimony. Inside there is only one room dedicated to weapons, one dedicated to torture instruments and a small but interesting exhibition dedicated to stories and legends. 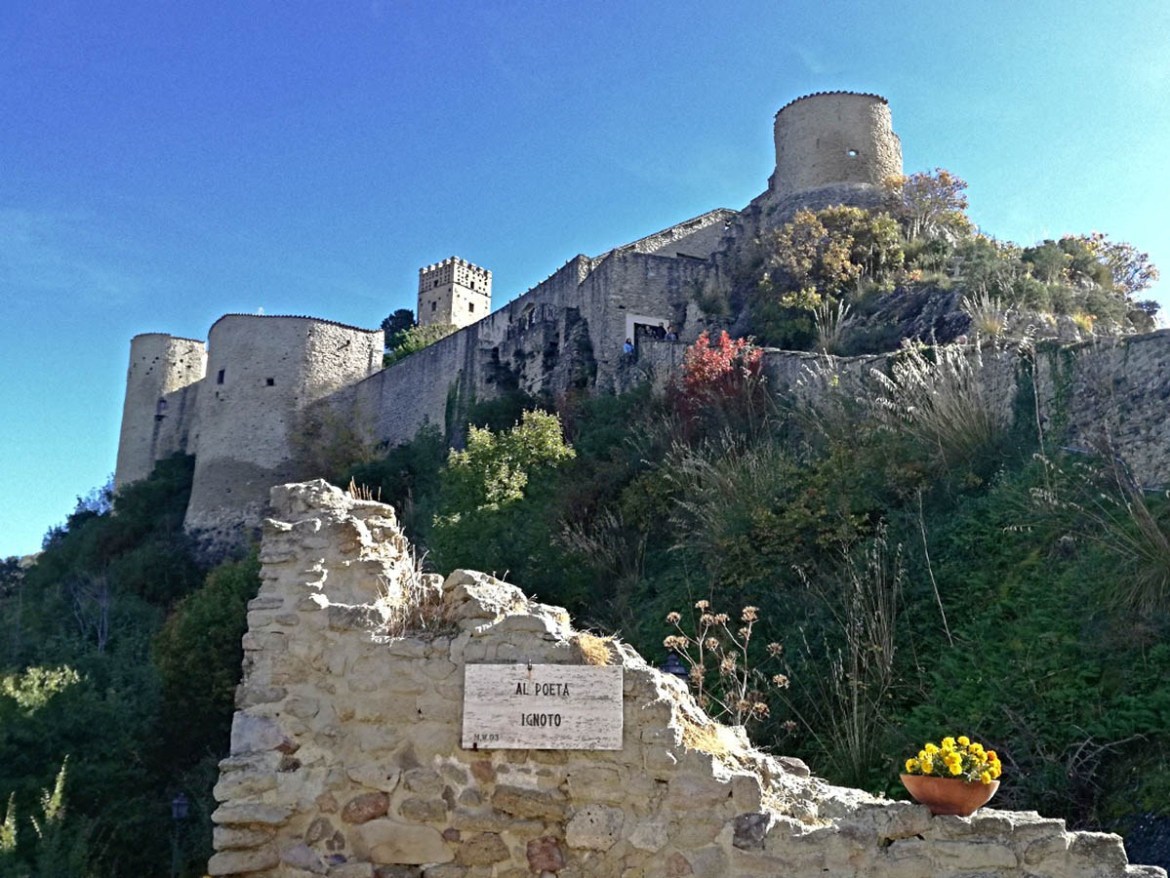 It was born to strengthen the territory militarily and to control the wool trade, the fort was never completed nor was it ever used for war purposes. It currently houses the National Museum of Abruzzo. It has a square plan and at the four corners of the perimeter the spear-shaped bastions are placed. It is equipped with a vast underground area that was once used as a prison. Of great visual impact is the enormous white portal, dominated by an eagle, symbol of the Austrian house.

It is the most famous Italic warrior, "icon" symbol of Abruzzo and its identity. It is the image of a king, King Nevio Pompuledio. The warrior king has a parade helmet on his head with a wide brim and feather crest; on the chest and on the back a protection of the heart. He has a sword in his sheath and in his right hand he has a sacrificial ax. He wears jewelery around his neck to indicate his wealth and his power. Next to him was also found the bust of a woman called the Lady of Capestrano, perhaps his bride or daughter. They are exhibited at the National Archaeological Museum of Abruzzo.

Fountain of the 99 spouts

It is also called the Fontana della Riviera because it is located in the Rivera area. It is a fountain made up of 99 stone masks from which water flows, it takes its name from this. Initially the function of this fountain was that of a public wash-house and the masks were not 99 but about 40, then they added another 59. The number of these masks represent the 99 castles that participated in the foundation of the city of Aquila. 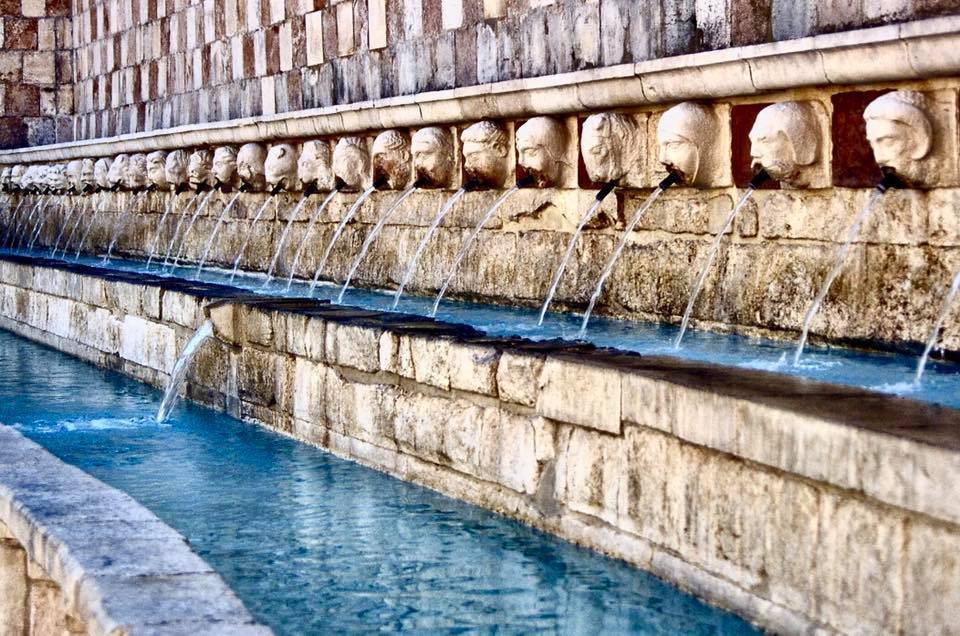 It is managed solely by the Spadone family, which seeks to enhance the whole area through typical and original dishes. Some dates appear on the menu, these are the years when certain dishes were created, never replaced. Example of the kitchen signed La Bandiera is the ArrostiGin, dated 2015, and is a fillet of sheep meat, flavored with gin, grilled and then served with cabbage. 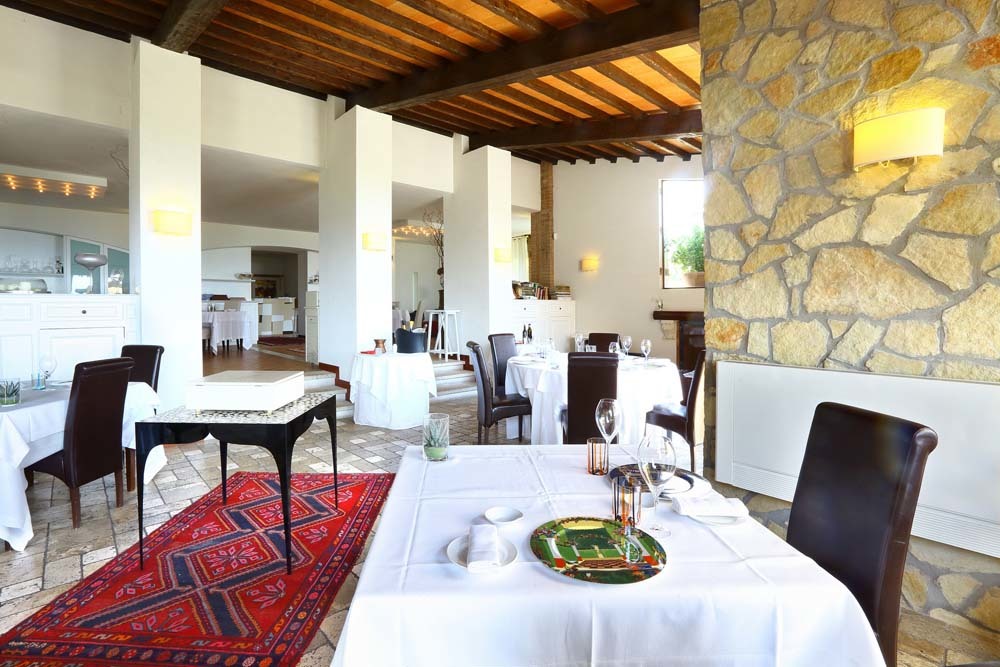 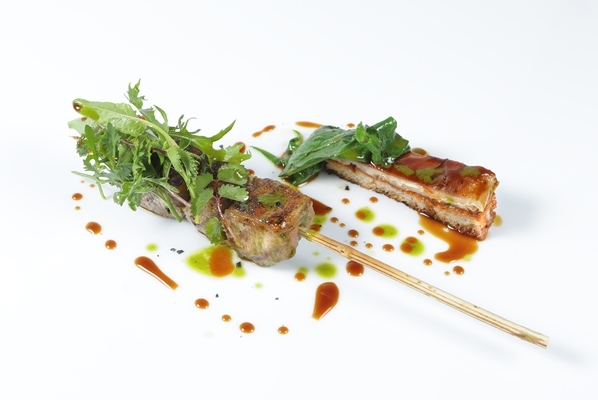 The room is large and hospitable thanks to the wooden furniture and the many books on display. Everywhere there are also bottles of wine and tables. The background music fills the room and appears so welcoming. The menu is varied, there are appetizers, first and second courses, and desserts. The wine list is very rich up to 850 wines, all Italian. 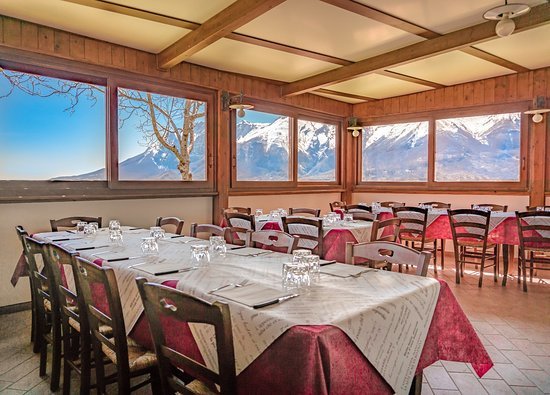 Restaurant "The cave of the Reselli"

The architecture of the restaurant gives a familiar feeling thanks to the stone walls and the fireplace and the attention to detail. One of the rooms is set in a long natural cave and gives life to an intimate and delicate environment. The dishes are linked to the territory and tradition. A rich selection of Abruzzo cold cuts and cheeses and a wide selection of hot appetizers. The meats of the territory conquer the scene of the second courses: among the many courses, the IGP lamb in its various preparations, the shank of veal with herbs of the Majella, the rabbit stuffed with the guardiese, the black pig with fennel wild and ginger. The assortment of desserts satisfies every need in search of taste and pleasure. 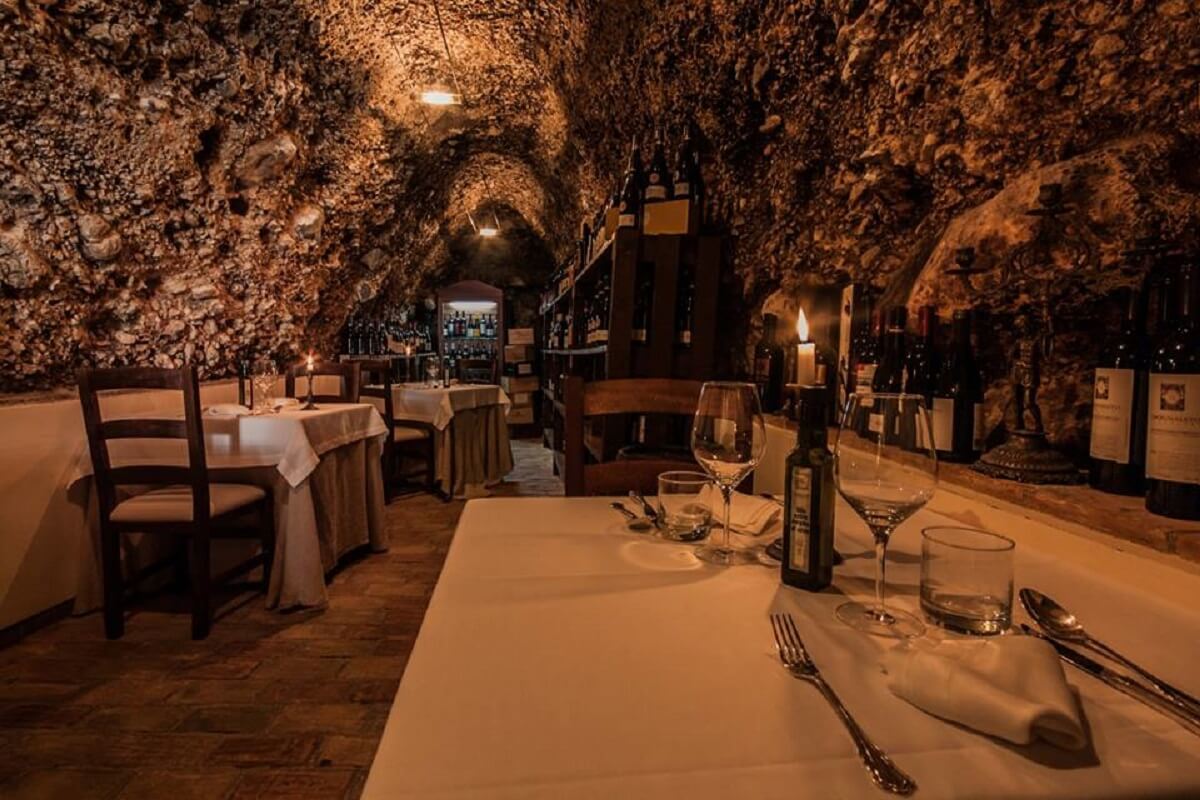 Dish made of lamb cutlet wrapped in endive leaves tied with small intestine of the same lamb. Considered a first course, or rather traditionally required at Easter lunch. A sort of tradition dedicated to the lamb of an unforgettable peasant past. 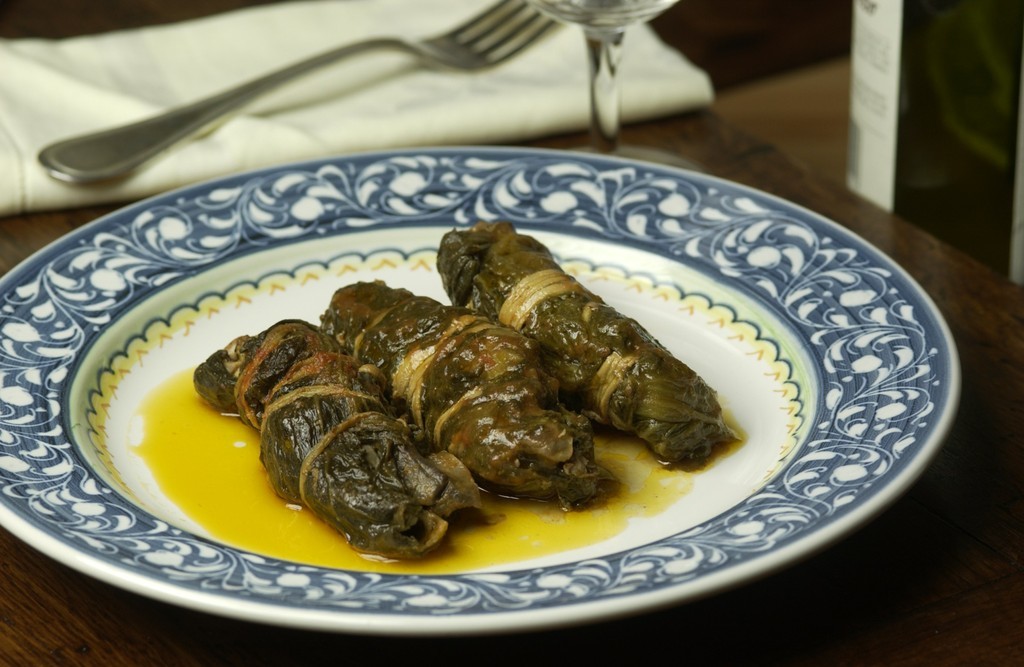 The dessert is made from flour dough, eggs and, in some variations, butter or olive oil, sugar, liqueur or lemon juice. From this balls are made then fried in oil. They are mixed with boiling honey, so when it cools they become more solid and from a structure. As often happens with traditional and ancient desserts, there are variations that add different ingredients to the basic recipe. 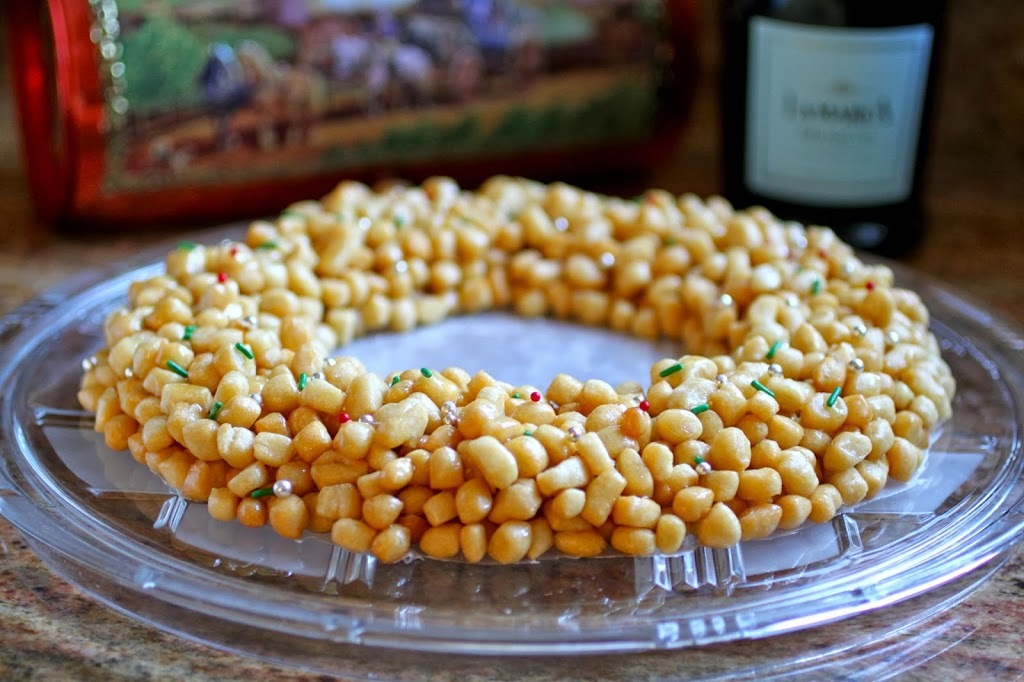 The name of spaghetti alla chitarra derives from the traditional tool that is used to prepare them, called "guitar" and its steel wires give spaghetti their unmistakable shape. In Abruzzo and Molise it is traditionally cooked with beef, lamb and pork ragù. 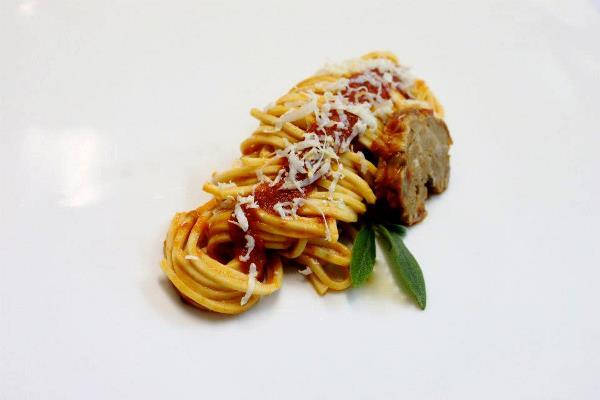 These are a typical dish of Teramo cuisine and, although they are spreading more and more throughout Abruzzo. They consist of very thin omelettes prepared by pouring a batter of flour, water and eggs onto a hot pan, similar to crepes. There are various types such as: scrippelle 'mbusse, that is, they are immersed in a chicken broth; the scrippelle timbale, where they replace the oasta pastry; the scrippelle in the oven, where they are cooked and stuffed in the oven. 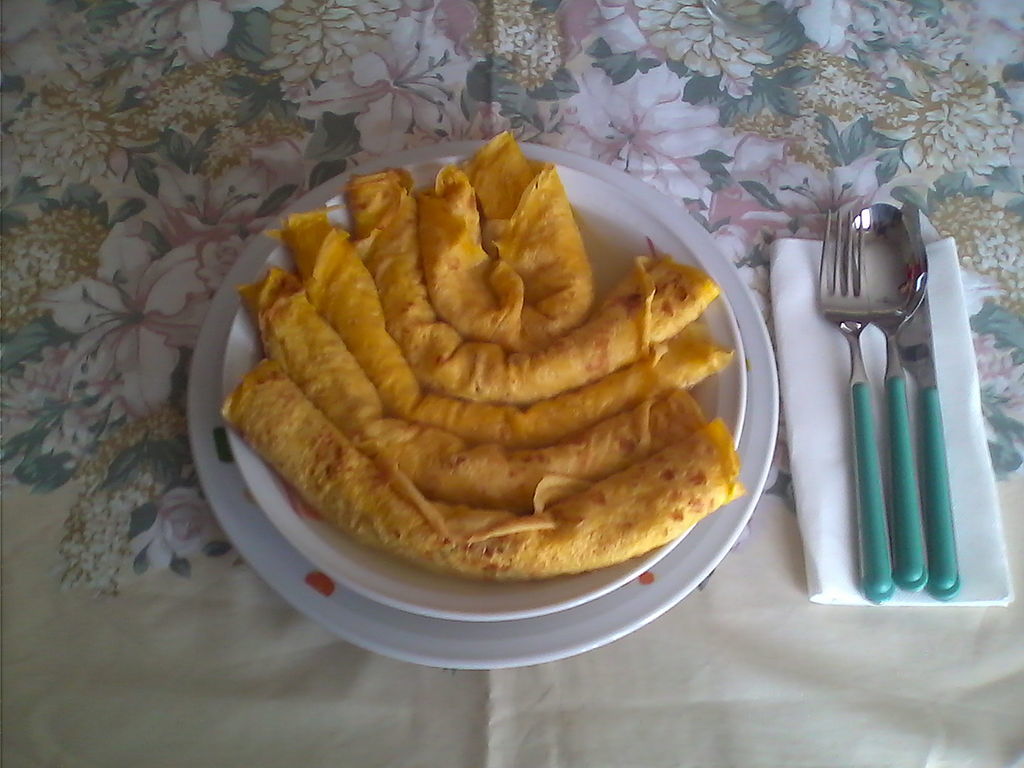