The historical monuments in Pescara

The eighteenth-century building, owned by the D'Annunzio family from the 1800s, was declared a national monument in 1927. The poet entrusted the restoration work to Giancarlo Maroni and it was only in 1933 that he arrived at the complete renovation. However, the building suffered serious damage during the bombings suffered during the Second World War; but the restoration work ended in 1927. The house is composed of nine rooms and preserves furnishings, period furniture and objects of the writer and his family.

The construction of the church is linked to the building activity of the city. The construction of the new church was strongly desired by Gabriele d'Annunzio, who also made his own financial funds available. The work came to an end in 1938. The temple became a cathedral in 1949. In 2018 the bell tower with a new cusp was restored.

The trabocchi are witnesses of an ancient civilization linked to fishing and the sea. Once upon a time the families of the poorest fishermen in the area lived there. And this was for the inhabitants in a sense of stability so as to fish calmly without leaving the coast. Many artists have described and represented this with drawings, photographs, paintings, described. The term trabocco was in fact Italianized and comes from the 'travocche' dialect, perhaps deriving from the Latin 'trabs': wood, tree, house.

It is a historic building, once the site of the Aurum liqueur-producing distillery. The factory has a horseshoe-shaped structure with two entrances. Completed in the years of fascism, architectural styles alternate between liberty and the neoclassical style of fascist art. Production of the Aurum continued until the 1970s, then it was forced to close. It is currently used as a museum and contemporary art gallery.

Basilica of the Madonna of 7 pains

It is named after Our Lady of Sorrows who had to face seven pains. It is a religious, historical, artistic and cultural point of reference for the whole region. It is a Latin cross. The façade until the 1960s was in white and purple red, then restored with simple colors. It is three naves. On the altar there is a wooden statue of the Madonna of the Seven Sorrows, represented in seven swords that pierce the protruding heart of the Virgin. 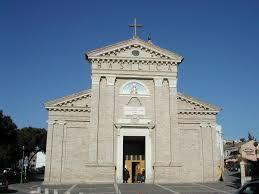 Born in the fifties by the will of Guglielmo Pepe and includes a collection of tools and some particular specimen of marine animal. In 1981 it was opened to the public as a civic museum. Today it preserves specimens of sea turtles, cetacean skeletons of the Mediterranean, such as the fin whale.

Sanctuary of the Madonna of the fire

There is a wooden statue of a young girl carrying baby Jesus in her left arm, dated 1600. The ups and downs of the construction lasted for over four decades, until a small church was built. In the years after the construction it is enlarged to the left. In 1883 it was enriched with two side altars.

It was originally a convent belonging to the Franciscan order, then I pass to Michetti who transmits it in a meeting place for cultural exchanges with writers, artists and intellectuals who shared ideas and ways of thinking. Upon Michetti's death, he was inherited by his wife and children. She is married to an aristocrat and is the mother of the current owner, Baron Ricci. The convent was remodeled between the fifteenth and sixteenth centuries. Inside it has a single nave.

It was built between 1454 and 1472, in honor of Saint Bernardino of Siena. The interior is in Baroque style after the renovation due to the earthquake in 1703. It also has a carved wooden ceiling adorned with pure gold. San Bernardino is still today considered the most important religious building in the city.