The historical monuments in Palermo

The palace is the oldest royal residence in Europe, home of the sovereigns of the Kingdom of Sicily, imperial seat with Federico II and Corrado IV. Greeks, Romans, Byzantines, Normans, Spaniards, and many other peoples have left their mark on the palace, as the rulers gathered scientists, poets, musicians inside the palace. At the time the Bourbons had the monumental Red Staircase built. Inside there is the Sala d’Ercole where, from 1947, the deputies of the Sicilian Regional Assembly meet. It takes its name from the paintings dedicated to the cycle of the Greek hero. The Sala Cinese evokes, instead, the fashion of the European courts between the XVIII and XIX centuries, with paintings of men and women dressed in the "Chinese", but on the blue background it is also possible to see some mountain landscapes.

It is the largest opera theater buildung in Italy, and one of the largest in Europe, third by architectural magnitude after the Opera National de Paris and Vienna State Opera. The construction company belonged to two parteners, Giovanni Rutelli and Alberto Machì. On May 16, 1897 the official opening of the theater with Verdi's Falstaff took place. In 1997 it was reopened after a long period of abandonment started in 1974 for reasons of procrastinated restoration. In 1990 the theater was the setting for some shots of the film The Godfather - Part III by Francis Ford Coppola. The theater was built by demolishing the church of San Francesco di Stemmate, in fact the tradition tells that a nun called “monachella“ still roams the halls of the theater, behind the scenes and subterranes and throws real curses. It is also said that those who do not believe in legend stumble upon a particular step entering the theater, a step called "step of the nun". 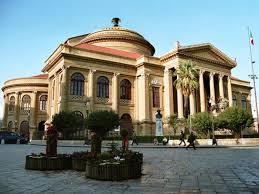 In 1170, during the reign of William II, the arcibishop of Palermo began construction. It was actually the reconstruction of a pre-existing ancient cathedral badly damaged by the 1169 earthquake. During the Saracen occupation in the 9th century, the church was restored and enlarged to be transformed into a large mosque. With the Normans we return to Christian worship and continue also under Arab rule.

In 1166 it was built by William I and then by his successor. In 1635 the prince of Castelreale, lord of the Mezzagrana and Zisa, bought the Zisa, and so another floor and a staircase were added. In 1806, the Zisa reached the Notarbartolo Princes. Since 1991, the Zisa has housed the Museum of Islamic Art. The Palazzo della Zisa, conceived as a summer residence for kings, represents one of the best examples of the marriage of Norman art and architecture and Arab decorations. Stereometry and symmetry of the building are absolute, it is distributed horizontally in three orders. 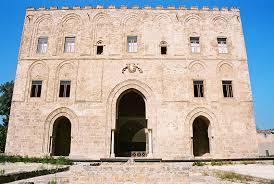 It was built in 1180 for King William II, and was called Genoardo. The original use was a pavilion of delights, the place where the King and his Court could spend their time in the cool of fountains and citrus gardens, resting during the day or attending parties and ceremonies in the evening. In later centuries, Cuba was destined for the most varied uses as a lazaret for plague, housing for mercenaries, state property. The interior was divided into three rooms aligned and communicating with each other. Just in Cuba, between the waters and the trees that surrounded it, Boccaccio set one of the novels of his Decameron. 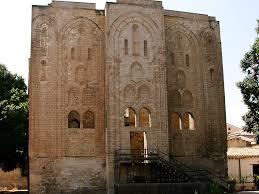 It is one of the gates of Palermo, the port is the entrance from the sea side to the Cassaro, one of the main axes of the city of Palermo. These are named after Donna Felice Orsini, wife of the Spanish viceroy Marcantonio Colonna, who decided to give the Cassaro a monumental entrance in 1582. The pylons were covered with marble, decorated with columns, balconies, loggias, architraves, balustrades, capitals, cornices, bands, festoons, garlands, pedestals, steps, friezes, curls, volutes. Following the bombings of the Second World War, the right-hand pillar was almost completely destroyed, but then it was restructured as the original, discovering also original decorations. 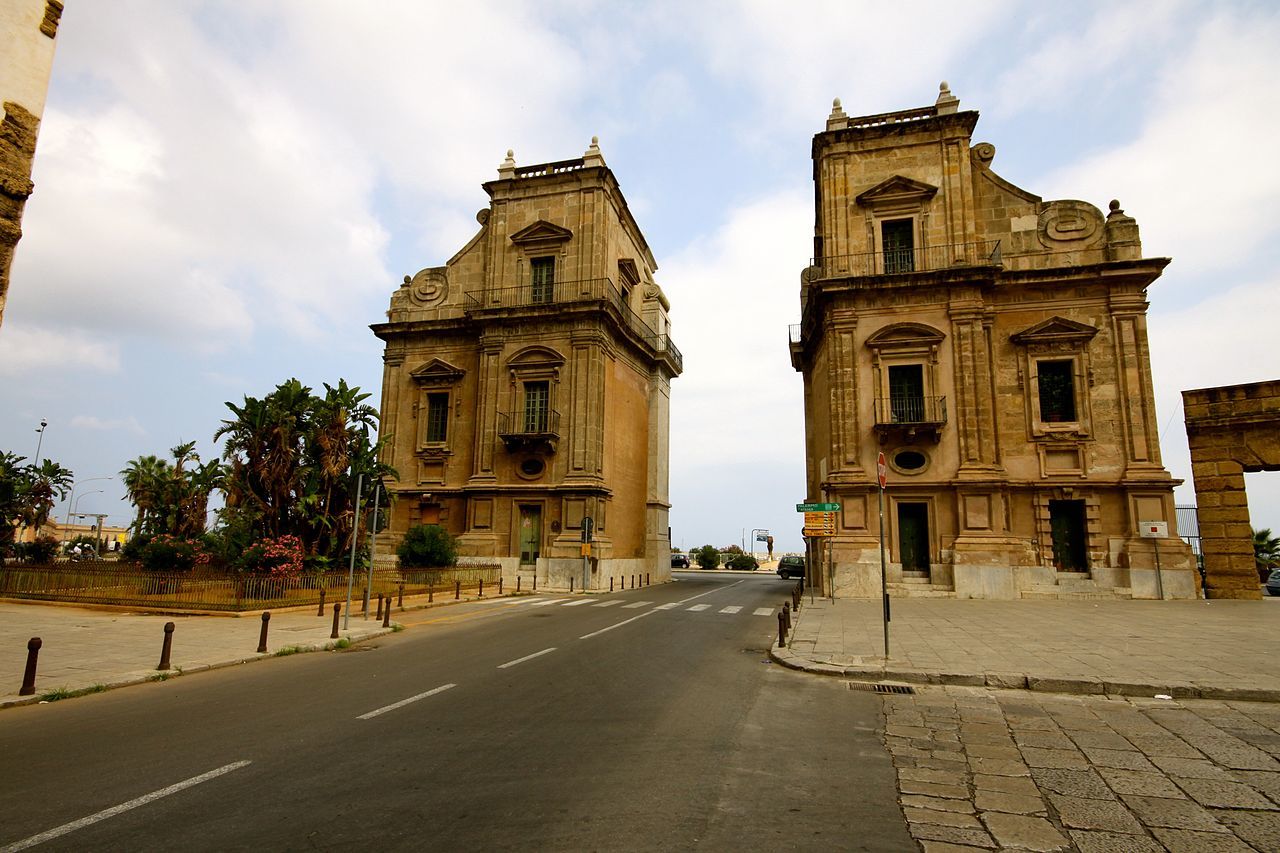 It is an ancient royal residence of the Bourbons of the Two Sicilies. It was commissioned by Ferdinand III of Sicily who had bought a Chinese-style house from Baron Benedetto Lombardo. The apartments are spread over three floors. In the basement there is the ballroom and the audience room, on the first floor the reception room, the dining room and the Chinese-style king's room. On the second floor was the apartment of Queen Maria Carolina, while on the last floor there was a large terrace. 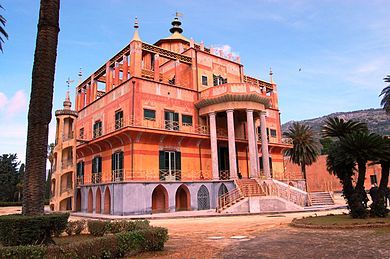 Work began in 1606, and by 1609 the structural part of the two cantons had to be completed. The project was inspired by the crossroads of the Four Fountains of Rome, designed by the urbanists of Pope Sixtus V. In 1630 there are works for the factory of the four fountains with the statues of the Four Seasons, in marble in the Brassic style. The architecture of the square is very simple, it represents a perfect octagon formed by four buildings alternated by roadways. 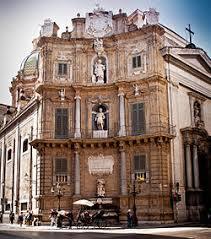 In 1573 the Palermo senate purchased the fountain with the intention of placing it in the square. The fountain was adapted to the place with the addition of new parts. Following the Piedmontese Savoy invasion, the fountain was considered the representation of the corrupt municipality and the people of Palermo nicknamed the square, also for the nudity of the statues, square of shame. 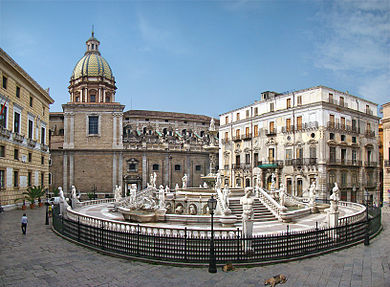 St. Maria of the Spasimo

Work began in 1509, approved with the papal bull of Pope Julius II. The danger of a possible Turkish invasion put in alarm the city of Palermo that immediately ran to the shelters reinforcing the fortifications and the ways of defense. The church remained in a state of neglect until 1988, and after a long restoration work, in 1995 it was returned to the public. Today it is home to the Brass, Palermo Jazz school.

Church of the Martorana

The church was founded in 1143 by order of Giorgio d'Antiochia, a great Syriac admiral of Orthodox faith at the service of the Norman king Roger II. It has a Greek cross plan. The church has recently been restored. The church is the landmark of 15,000 faithful arbëreshë. A Byzantine and Norman building from the Middle Ages with a facade tower, it stands out for the multiplicity of styles encountered. 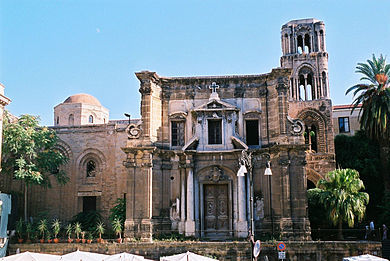 Cathedral of the Monreale

Built starting in 1174 on commission from William II of Altavilla, it is famous for the rich Byzantine mosaics that decorate its interior. It is the largest mosaic decoration in Italy. The interior is characterized by innumerable and precious mosaics depicting scenes from the Old and New Testament. The history of its construction is linked to a famous legend and is somehow intertwined with the history of the construction of the Cathedral of Palermo.

It is an example of Arab-Norman architecture in Sicily. It is a military fortress. This was inhabited by King Martin I who wanted to be protected from attacks. The style of architecture is Norman, redundant in Sicilian castle architecture. It also contained a chapel of which the three apses and a central nave still remain.

In the basement there are the famous catacombs of the Capuchins in Gothic style, so called but in reality cemetery and not catacomb, that is a place of worship and early Christian reunion. The galleries were excavated at the end of the 16th century in Gothic style with subtitles with cross vaults. The mummies, standing or lying down, dressed in full stitch, are divided by sex and social category. The embalming method first of all involved having the body "drained" for about a year, after removing the internal organs. Then the body, more or less withered, was washed with vinegar, filled with straw, and covered with his clothes. 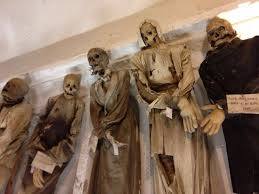