The historical monuments in Naples

The construction is due to the initiative of Charles I of Anjou. In 1443 Alfonso of Aragon, who had conquered the throne of Naples, established a court in the castle. King Alfonso entrusted the renovation of the Angevin royal palace to an Aragonese architect. In the "Sala dei Baroni" took place the epilogue of the famous conspiracy of the barons, hatched against King Ferdinand I, son of Alfonso, by numerous nobles. In the 1920s, the wide strip of flowerbeds was built, which ran along the Maschio Angioino until the end of the 20th century. Of the Angevin fortress remains the palatine chapel, some towers and the French walls and cross windows next to the palatine chapel.

It was the historical residence of the Spanish viceroys for over one hundred and fifty years, of the Bourbon dynasty from 1734 to 1861, ceded in 1919 by Vittorio Emanuele III of Savoy to the state property, it is mainly used as a museum, in particular the Royal Apartments, and is the seat of the national library. The Royal Palace was built from the 1600s, to reach its final appearance in 1858. The facade is made of brick of rosé terracotta, piperno and volcanic stone in a late Renaissance and mannerist style.

It was the first landing place of the Greeks who conquered the Gulf of Naples and founded in 474 a. C. the "new city" Neapolis. The first hints of fortification occurred with the presence of the monks, but became a fortress with the Normans, and then a castle with the Angevins. Probably linked to the legend of the siren Partenope. 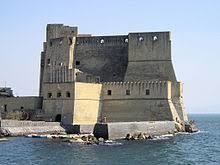 It constitutes a religious monumental complex. It includes a hundred rooms, two churches, a courtyard, four chapels, three cloisters and hanging gardens. The Charterhouse was inaugurated and consecrated in 1368, under the reign of Queen Joanna of Anjou. It was dedicated to Martin of Tours, probably due to the presence of an ancient chapel dedicated to him. The facades of the church were rebuilt at the end of the sixteenth century. The interior consists of a single nave with eight side chapels and other rooms.

It is one of the most important and largest churches in the city, both for its artistic and cultural value. In the thirteenth century the construction of the building began, but it involved the destruction of other structures. During the earthquake of 1349 the bell tower and the facade collapsed, but it was then rebuilt in Gothic style. During the Second World War some structures were damaged, and with the restoration Roman, Greek and medieval archaeological remains came to light. The facade of the cathedral was rebuilt several times over the centuries, the current one was rebuilt in neo-Gothic style. The interior has three naves and side chapels.

This originates from a Norman observation tower called Belforte. The castle is also home to various temporary exhibitions, fairs and events. The castle is one of the most significant examples of 16th century military architecture. On the piperno portal stands the imperial coat of arms of Charles V, with the double-headed eagle and a marble inscription reminiscent of his kingdom. Inside, the Museo Novecento Novecento 1910-1980 is stably set up. 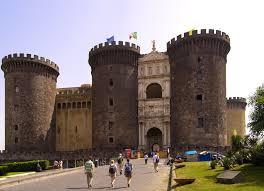 The fountain is the work of Pietro Bernini and Michelangelo Naccherino commissioned by the Duke Toledo. Near the fountain stands the statue of the giant but was removed in 1807. It was definitively established in via Partenope. It has three semicircular arches and above each one finds the city crests. In the sentral arch there is the cup supported by two marine animals, while the stutes in the lateral arches represent river divinities that hold a sea monster in their hands. The lateral caryatids hold a cornucopia in their hands.

It is a large archaeological area dating back to Roman times, also characterized by four monumental cloisters. The monastery avoided all the bombing and for this reason it still maintains its baroque style. On the south side is the part of the former refectory of the nuns which preserves a very large painting of the Crucifixion. It also presents rooms, ancient kitchens, it is thought to have been the place dedicated to kitchens but it was not so. Some cloisters have a Corinthian style, while others maintain the Romanesque style.

This complex contains some of the most important testimonies of the Neapolitan Renaissance. It was founded in 1521 by Maria Lorenza Longo who wanted to respect a vow of faith made when he was the victim of an illness that had paralyzed him. It is composed of two wooden rooms on which there are 400 majolica vases. The courtyard has two fountains and a well where people were lowered to calm them.

The palace was built in the seventeenth century and was restored in a neoclassical style. The facade of the building is marked in an eclectic style with three orders: Doric, Ionic and Corinthian. Inside there are reinforced concrete pillars and escalators are installed in the fifties.

The main entrance consists of an exedra facade, which at the bottom has an architraved portico, supported by travertine columns and two blind arches. The arch on the right shows, on the columns, from left to right, Winter, Spring, Summer and Autumn, traditional subjects that represent the unfolding of time to which human activities are linked, the Work and the Genius of science. The arch on the left shows, on the columns, the four continents Europe, Asia, Africa and America.

Palace of the Spanish

The Spanish palace was built in 1738 on commission from the Marquis Nicola Moscati. The building saw the property fragmented into several parts and today constitutes several private properties. Only two apartments on the top floor, being restored, are from the Campania region. It is in Neapolitan Baroque style. The doors to the apartments are decorated with stuccos that frame medallions with bust portraits of the family who lived in that apartment.

It was built in 1484 by King Ferrante of Aragon and, since its construction, it has been the access point coming from the east towards the city center. It is formed by a white marble arch richly decorated with bas-reliefs, with two towers on either side symbolizing honor and virtue. It has a Renaissance style.