The historical monuments in Matera

The stones are two neighborhoods, well-known for their ancient cave dwellings inhabited since the Paleolithic period. The stones originated from a prehistoric settlement and seem to be a first settlement in prehistoric Italy. Then there is evidence that people lived here as early as 7000 BC. The term sasso derives from Latin saxum, meaning a hill, rock or great stone. Until the late 1980s this was considered an area of poverty, but today there are pubs, hotels, restaurants, and thriving businesses. 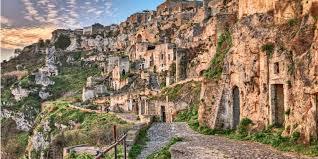 The castle of the sunset

It was born as a Norman residence with eight square towers for defensive purposes and a bridge. Then it is re-structured to create high spaces. The castle was built by Giovan Carlo Tramontano in the Aragonese style and is formed by a central male and side towers. Construction took a lot of money and the population suffered from it. So some hid behind a stone called the stone of bad counsel to organize the murder of the count. When he left the cathedral he was killed and the castle remained unfinished.

It was built in the XIII century on a small church dedicated to Saints Peter and Paul and inside there is still the fresco of the visit of Pope Urban II. It also seems that I host St. Francis in person during one of his pilgrimages. It has a Baroque style. The facade is divided into two by a string course cornice with a large window in the center.

Church of St. Maria in Idris

It is rock church, caved in the rock. The name Idris derives from the Greek Odigitria, and means the one who shows the way. On the altar there is a Madonna and Child dating from the seventeenth century painted in tempera, and other frescoes dating back to this period. It is composed of an irregular nave with frescoes and also of the crypt which, however, almost went away due to humidity.

The Gravina of Matera

These are deep furrows with sub-vertical walls and embedded in calcareous rocks, dug by streams. It was born about a million years ago with the beginning of the emergence of the area and the progressive lowering of the sea level. The ravines are typical karst morphologies of the Murgia, those of Matera are some of the ravines of Basilicata and Puglia.

Fallen in the war

The inauguration took place on May 13th 1926 in the presence of King Vittorio Emanuele III. The work stands on a stepped stone base and inscriptions have been placed on the fallen. On the sides there are two soldiers with swords lying like in the classical world. On the base where the columns stand, there is a bronze medallion depicting an anchor, a helmet and an eagle. On the steps there is a crown of barbed wire.

It is the largest underground water cistern in the city of Matera and is located under the pavement of Piazza Vittorio Veneto. arises from the connection of more pre-existing caves in the area with the increase in population. The construction of the cistern dates back to the nineteenth century and ended in 1882. The Palombaro was rediscovered in 1991 by a group of scholars. The name could derive from the Latin palumbarius and therefore refer to a bird of prey that throws itself on its preys and dives or from the Greek which means to immerse.

A beautiful work of Kenjiro Azuma. It summarizes various aspects that have characterized the millenary history of Matera. It represents the perennial cycle of human life, compared to the water cycle since it is first a drop that wets the earth, then evaporates and returns to the sky to reform itself into a drop and fall to the earth again. Life in Matera has continued undaunted over time, not caring for the difficult conditions in which the inhabitants found themselves. Azuma's philosophy is intertwined with the history of Matera: on the one hand the cycle of life, therefore the life of the drop, on the other the water conservation system, while the search for the voids of the human being is represented by the furrows along the drop linked to the activity of the inhabitants who digging have known how to adapt nature to the needs.

It was the first sacred structure to arise outside the city walls. It was built from 1230 on another small church and finished in 1233. During the Otranto war it was abandoned but then in 1695 it was reopened as a place of worship. It is in Romanesque style but has also Gothic and Greek influences. The medieval chapels contain a 16th century fresco of the Madonna della Nova and two wooden statues. In the chapel on the altar there is a canvas from the mid-eighteenth century.

The cathedral was built in the Apulian Romanesque style in the 13th century on the highest spur of the Civita. It was built starting from 1230 and completed in 1270. In 1991 he received the visit of Pope John Paul II. On 2 July 1962 Pope John XXIII raised it to the dignity of a minor basilica. In 2006 he received a series of restoration interventions. The interior has a Latin cross plan and three naves.