The historical monuments in Bari

It was built in Romanesque style between 1087 and 1100, during the Norman domination. The construction endend in 1103. The simple and majestic façade is divided into three sections by pilasters, crowned by small arches at the top of mullioned windows and at the bottom by three portals. It is divided into three naves by twelve bare columns. 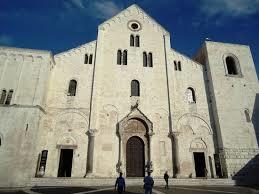 The history for the construction begins when Onofrio and Antonio Petruzzelli propose the project to the municipality. In 1898 work began and ended in 1903. In the 1954 was declared "Monument of historical and artistic interest". It has hosted pop music concerts, the venue for the Caravella song of successes, Ornella Vanoni, Lucio Dalla. In 1991 it was destroyed by fire and prevented reconstruction. It was then was rebuilt with public money.

It is a 13th century fortress built by the Emperor of the Holy Roman Empire Frederick II. Probably at the death of Federico the construction was not over yet. This was also a place of prison. Under the dominion of Charles I, Manfredi's young children were imprisoned. But it was also a shelter for shepherds, brigands, and political refugees. The building is octagonal in plan. The interior has two floors, and everything is made up of eight towers.

Dating back to the 12th and 13th centuries, it was built by Archbishop Rainaldo. It is structured with three naves, with square cross-vaulted pillars. This church was later destroyed by William the Bad. Restructured then refers to the style of the Basilica of San Nicola, while the interiors are inspired by the Baroque style. The facade is divided by two pilasters in three parts that reproduce the section of the naves. The interior has been stripped of all the baroque decorations, above the arches there are fake women's galleries.

This investment tower was built in the 1500s to defend the coast from pirates and marauders. It then became a small village of fishermen who lived in trulli or in natural caves to repair their boats. Torre Pelosa became a favorite resort for not only the citizens of Noicattaro, but also those of Bari. A few years later its name was changed to "Torre a Mare".

Aqueduct palaceIt was built in 1926 in liberty style. It has two entrances and forms a triangle in which there is a courtyard. It consists of six floors. It has numerous decorations built with cement. There are two domes above the terrace. It is certainly, together with the Cathedral, the Chiesa delle Croci, Piazza Giordano and the Fontana del Sele, one of the symbols of Foggia.

The pilgrims arrive in Bari to visit the remains of the Orthodox saint St. Nicholas the Wonderworker. Twice a year, during the festivities dedicated to the saint, offers were made to build a Russian church in Bari throughout the Russian empire. Construction was completed in the 1920s. For 16 years now the church has been welcoming pilgrims from all over Russia. 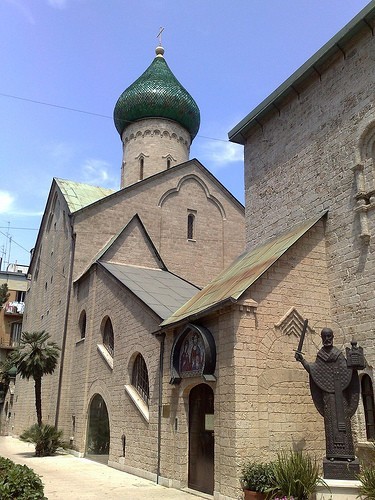 Shrine to the fallen overseas

The structure houses the remains of over 75,000 Italian soldiers who died in foreign lands from 1940-1945 brought back to their homeland. But it is also home to the museum of war memorabilia, the Italian troops of that period. Remains of soldiers and civilians who died in the concentration camp were also included. The historical museum is also located which reconstructs the phases of the war fought and also preserves photos, weapons, documents. 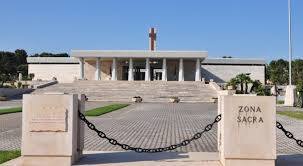 It was built between the twelfth and thirteenth centuries with various successive modifications, and is the centerpiece of the historic center. It is connected to the episcopal palace since it was the seat, until 1986, of the diocese of Ruvo. The facade is salient, typically Romanic, with three portals. In the outer arch are represented Christ, the Mdonna, St. John the Baptist and the twelve apostles. The interior is divided into three naves, leading into three apses, and into a transept following the Latin cross.

The church of Barsento

The building stands in a dominant position on a promontory overlooking a channel called "di Pirro". It is an important testimony of Romanesque rock architecture. The place was therefore inhabited by Messapian populations. In the Middle Ages the church hosted a monastic community and various burials were found inside. A vast medieval burial ground came to light behind the church, from which emerged the remains of adult males and children, but also women, who had signs of surgery. The church has an irregular layout, with three naves ending in apses and with barrel vaults supported by pillars.