The Cathedral of Santa Maria is the main place of worship in the city of Auch, in France, a bishop's see of the homonymous archdiocese.
It is above all famous for its series of beautiful sixteenth-century stained glass windows and the beautiful 113 wooden stalls of the choir finely and richly carved with biblical scenes. of construction. The interior has a Latin cross plan divided into three naves with chapels by simple cylindrical pillars that are grafted directly onto the vaults, without capitals; large transept and choir with ambulatory. The windows of the cathedral are in medieval style but also with small Renaissance influences. 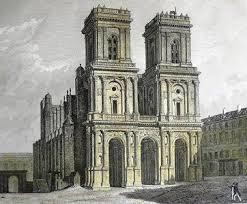 The Cathedral of Saint Cecilia is the cathedral church of the Archdiocese of Albi, located in Albi, capital of the Tarn department in France. It lays on a rocky peak that dominates the Tarn river and is one of the largest buildings in the world built with only bricks. The Cathedral of Saint Cecilia has the characteristics of a stronghold precisely because the exterior is characterized by the dungeon. church is located along the right side, at the sixth span, and is in a Gothic style. The interior of the Cathedral of Santa Cecilia has a single nave of twelve bays with square side chapels surmounted by a women's gallery. of counter-façade, above the circular buttresses of the bell tower, there are two cycles of frescoes 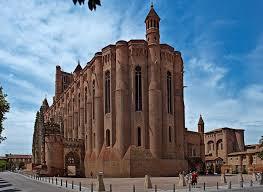 St. Peter's Cathedral is the main place of Catholic worship in Montpellier, in the Hérault department. The church, seat of the bishop of Montpellier, has been a historical monument of France since 1906. During the religious wars the cathedral became the target of Protestant attacks. On 20 October 1561, after a siege, the crowd entered through a hole in the cathedral where some Catholics had taken refuge and massacred them. The church was thus looted a first time and then again in 1562, when it was deprived of its iron bells and railings, used to manufacture ammunition with which to resist the siege of the city by Catholics; still in 1567, when the attacks of the Protestants caused the collapse of a tower, which followed the collapse of the entire building. 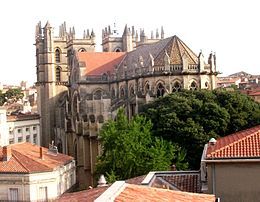 The Arena of Nimes

The Arena of Nîmes is a Roman amphitheater located in the French city of Nîmes, in the Gard department. Its name derives from the Latin ărēna, which indicates the sand that covered the slabs of the Roman amphitheaters. It is one of the largest amphitheaters of its kind, and also one of the best preserved, so much so that in France. regularly for various shows. The building has an elliptical plan, 133 m long and 101 m wide. It reaches a height of 21 meters and has a capacity of 13000 seats. In Roman times, the capacity was still much greater. 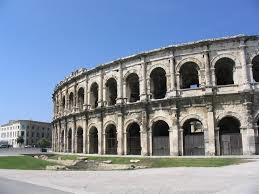 La Maison Carrée is a Roman temple, one of the best preserved ancient temples, located in Nîmes, in southern France. Since 1840 it has been classified a historical monument of France. It was built between 19 and 16 BC. by Marco Vipsanio Agrippa and was dedicated to the sons of the same Agrippa and Giulia, daughter of Augustus, Gaius and Lucius Caesar, adopted by his grandfather as his heirs and who both died at a young age. piazza del Foro citizen. The podium was accessed by means of a staircase of 15 steps, reconstituted with some of the ancient elements. It is a hexastyle pseudoperipteral temple, with a particularly deep pronaos. In this temple the models coming from the great Augustan architecture of Rome are combined in a single conception with some peculiarities due to the local workers. 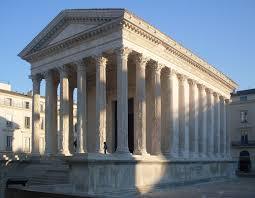 The Basilica of Notre-Dame de la Daurade is a Catholic church in Toulouse, in the Haute-Garonne department. The church is located along the Garonne and has the title of minor basilica since 1876. Since 1963 it is considered a historic monument of France. 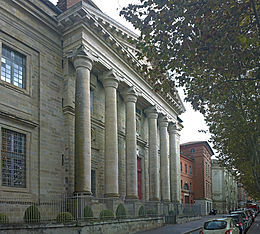 The basilica of San Saturnino

The basilica of San Saturnino is one of the main churches in Toulouse, France. The sacred building, built on the tomb of Saint Saturninus martyr and first bishop of the city, is considered one of the greatest examples of Romanesque architecture in southern France. The most characteristic element of the exterior of the basilica is the 65-meter high octagonal tower, which rises at the intersection of the transept with the nave. The western façade is austere, gabled, punctuated by buttresses. from eleven spans, with a barrel vault 21 meters high, and is divided by the minor naves, two of each side, using round arches supported by pillars. Above the side aisles, cross-vaulted, is the women's gallery, open towards the inside by round-arched mullioned windows, also present in the transept and the choir.

St. Stephen's Cathedral is the main Catholic place of worship in Toulouse, in the Haute-Garonne department. The church, home of the bishop of Toulouse, has been a historical monument of France since 1862.
The large Romanesque building is largely rebuilt in Gothic style and remained unfinished. The Gothic choir is grandiose, with a nave and two aisles and an ambulatory with radial chapels, which is poorly connected with the primitive Romanesque piedicroce. 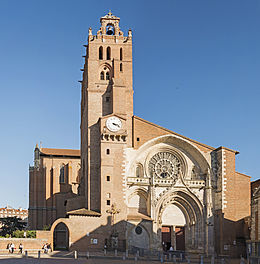 The Jacobins church, in French église des Jacobins, is part of the complex that belonged to the Order of Preachers in the center of the city of Toulouse, between the Capitol and the Garonne.The adjective "Jacobin" attributed to the French Dominicans by their large convent in the rue Saint-Jacques in Paris.
The entire convent complex is made of bricks and is considered a jewel of the Languedoc Gothic art in the field of monastic buildings of the 13th and 14th centuries.Since 1369, the church has housed the tomb of St. Thomas Aquinas, to whom it is dedicated.Furthermore, in 1229 the ancient University of Toulouse, which was suppressed during the French Revolution, was established in the convent.

The church of Notre-Dame du Taur

The church of Notre-Dame du Taur is a Catholic place of worship in Toulouse, in the Haute-Garonne department. The church is linked to the cult of San Saturnino, being built on the site where the martyr's body, tied to a running bull, broke away from the animal. Since 1840 it is registered as a Historic Monument of France 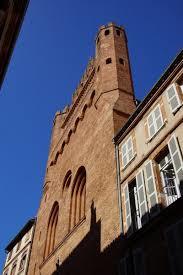 The Babotte tower is a remnant of the old ramparts of Montpellier, in the Hérault. Classified as a historical monument, it was used as an astronomical observatory in the XVIII century. remains one of the last vestiges with the door of the Blanquerie. 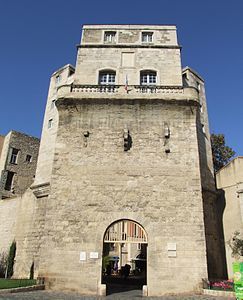