Saint Michel Abbey is the second most visited site in France after the capital Paris. The primacy, however, is anything but recent. Already in the Middle Ages this place was a destination for pilgrims from all over Europe. There are several reasons behind the site's extraordinary popularity. Abbey 157 meters high, and situated on the top of a small island around which, over time, a small village rose, surrounded by powerful defensive walls. Still today, Saint Michel, in addition to being an abbey, is a scattered village of typical shops, restaurants and with its widespread receptivity. The other reason behind the global appeal of the town is the high tide phenomenon. 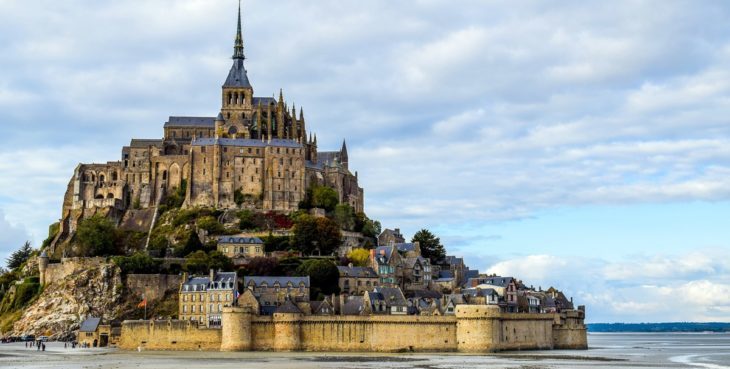 Cathedral of Our Lady

The Cathedral of Our Lady, a masterpiece of Romanesque and Gothic architecture in Normandy, is the main Catholic place of worship in Bayeux, in the Calvados department. The church, home of the bishop of Bayeux, has been a historical monument of France since 1862.
Presumably located in the forum of the Roman city of Augustodurum and in place of a Merovingian building, the current cathedral was consecrated in 1077 together with the remarkable episcopal complex still well preserved today. 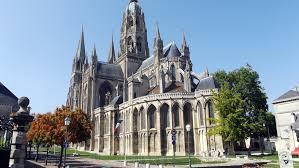 St. Joseph's Church, Le Havre is a Roman Catholic church in Le Havre, France. From 1945 to 1964, the city of Le Havre commissioned Auguste Perret and his studio to direct the reconstruction of the entire city after being completely decimated by the British during World War II. The Church of St. Joseph of the Nations occupies an entire city block, bordered to the north by rue Darboy, to the west by rue du Chevet, to the south by rue Deguerry and to the east by rue Saint-Maur, on which it gives the façade. The entire complex is in a neo-Romanesque style inspired by the 12th-century French Romanesque churches.
The main façade is salient, and follows the internal structure with three naves; below, the portico of three bays opens with round arches resting on pillars. Access to the interior is through three slightly splayed portals, each of which is surmounted by a painted lunette. 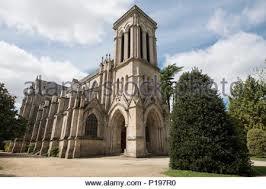 Among the oldest and most important monasteries of the West, Jumièges has lived an eventful history. Founded in 654 by Saint-Philibert, courtier of King Dagobert I, the abbey was hit several times but its great silhouette seems to be etched forever in the landscape. Destroyed in 841 by the Vikings and then during the Hundred Years War, it saw its buildings used as stone quarries towards the end of the Revolution. Undressed, his remains still have a certain power. The vestiges of the cloister and convent buildings seem to be dominated by the impressive 46 m high twin towers that tighten the Romanesque façade of the building. The park and its centuries-old trees contextualize what Victor Hugo called "the most beautiful ruin in France". Adorned with a mantle of white limestone, it watches over the meanders of the Seine, it lives at the rhythm of the seasons, elegant and secret.

The primatial cathedral of Our Lady (in French: primatiale Notre-Dame) is the cathedral of the archdiocese of the same name and the most famous monument of the city of Rouen, in the Normandy region, in France.
It is located in the old city, on the right bank of the Seine, not far from the Piazza del Mercato Vecchio, where Joan of Arc was burned alive on May 30th 1431.
Notre-Dame de Rouen is one of the largest and most luxurious Gothic churches in France; his Lanterne Tour has the distinction of having the highest spire (flèche) in the country and the third in Europe (151 meters above the ground), which made it the tallest building in the world between 1876 and 1880 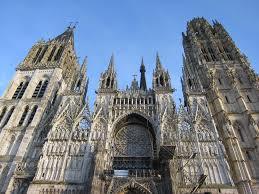