The Château du Haut-Kœnigsbourg is a medieval castle is a medieval castle located in the commune of Orschwiller in the Lower Rhine department of Alsace. vie del vino. The castle is located in a strategic position on a rocky outcrop overlooking the high reno plain. It was almost completely destroyed during the Thirty Years' War. Fortunately, in 1899, Emperor William II had it restored with the aim of turning it into a museum and was recently renovated and reflects the style and medieval architecture.
Inside, the rooms are finely decorated with murals, Renaissance furniture and huge cast-iron stoves. In the cellars, a collection of medieval weapons is preserved. 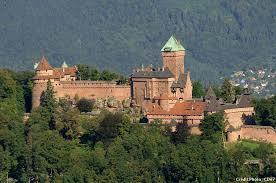 Sainte Odile is a place full of charm, admission is free and not far from the hotel there is a wine route.It is one of the most important pilgrimage sites in Alsace since, for centuries, it hosted a monastery founded by Odile, the patron saint of Alsace. Despite being converted into a hotel and a restaurant, the monastery is still today a mysterious and fascinating place. , where you can breathe an incredible air of sacredness. do not miss the view from the terrace, outside there are also two chapels that of the angels of tears both decorated with mosaic.
Near the castle there is evidence of Celtic settlements.
Hohenburg Abbey it is said that the convent was founded by Adalrich, Duke of Alsace, in honor of his daughter, Saint Odile. Destroyed during the Middle Ages, it was rebuilt by the Premonstratensians in the early 17th century. It was later purchased by the bishop of Strasbourg, who restored the building and the adjacent church in 1853.
A famous manuscript was written in the convent, the Hortus Deliciarum.
The Pagan Wall is a huge construction about 10 kilometers long that surrounds the Mont Sainte Odile. 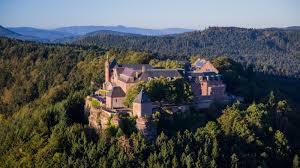 The Maison Kammerzell is a typical half-timbered house, built and decorated between the 15th and 16th centuries in late Gothic style, on the order of one of the richest merchants in Strasbourg. It is, thanks to the splendid decorations on the façade, one of the most beautiful houses in the city, its distinctive roof lines and elaborate furnishings make it a feast for the eyes. Intricate carvings and paintings and old glass windows make a beautiful presentation ..
It is said that the Kammerzell House is the most beautiful house in Strasbourg and is certainly one of the oldest.
The Maison Kammerzell is located just opposite Strasbourg's Notre-Dame Cathedral and is home to many Alsatian restaurants. Several dining rooms offer a variety of decors and environments.
It is located right next to the Tourist Information Office on the Place de la Cathédrale. 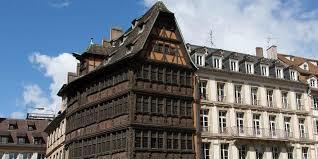 The Cathedral and the astronomical clock

The marvelous gothic cathedral of Notre Dame de Strasbourg has its unique spire, no less than 142 meters high. The construction of the cathedral began in 1015 in Romanesque style but its construction continued following the canons of the French and German Gothic architecture of the period. The exteriors were defined by Victor Hugo as "the largest open-air book of the Middle Ages" due to the impressive ornamental effect.
The year is represented by a perpetual calendar in the shape of a ring with months, days with the respective saints and fixed and mobile holidays.Representing the weeks are the divinities: Apollo on Sundays, Diana on Mondays, Mars on Tuesdays, Mercury on Wednesdays, Jupiter on Thursdays, Venus on Fridays and Saturn on Saturdays.To mark the time there are instead the symbols of the four ages of life: for the first quarter of an hour there is a winged child, for the second an adolescent boy, for the third an adult and for the fourth an elder. Everyone passes in front of the death represented by a skeleton with the scythe in one hand and the clapper, with here the hours beats, in the other.After the strokes of the Strasbourg astronomical clock, a different winged child overturns the hourglass.At noon, moreover, the statues of the apostles pass before Jesus who blesses those present and the cock flaps its wings singing three times. 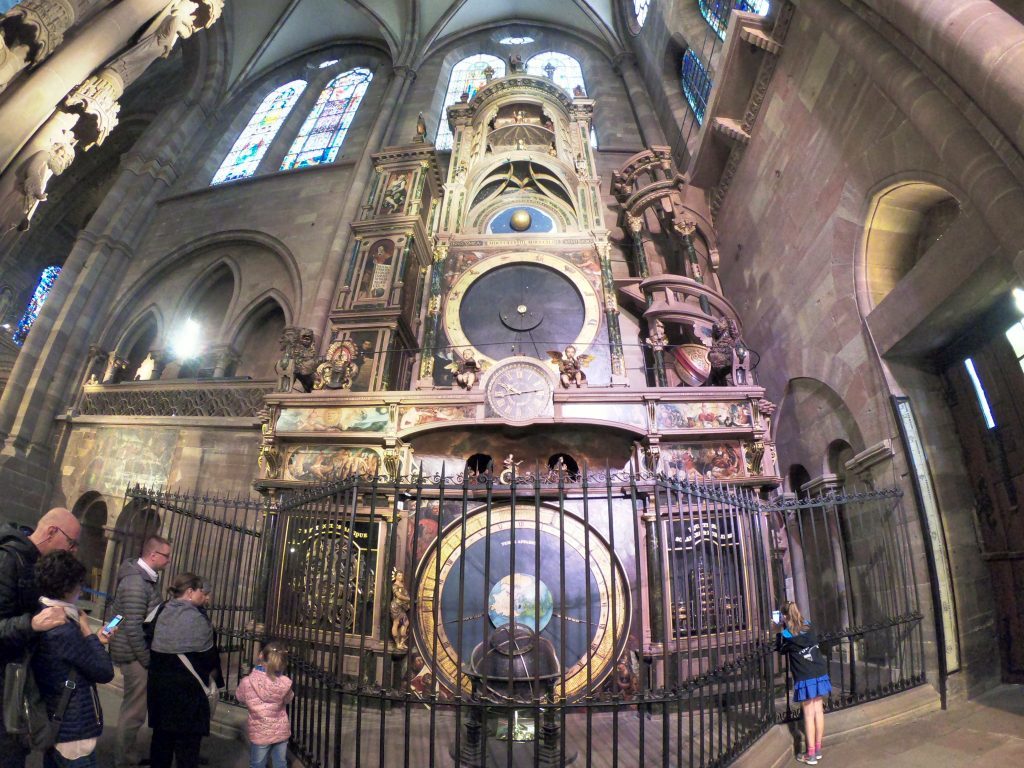 One of the most magical and photogenic places in Strasbourg, a group of three bridges dominated by four towers having, at the time, a defensive function.
The covered bridges are located at the end of the Petite France district and, although the roof disappeared in the 18th century, they kept their original name. And from the bridge you can have a magnificent view. 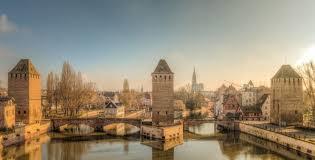 The castles are other witnesses of the medieval lifestyle in Alsace that have managed to pass through the centuries and that today gives them a real power of enchantment.
The 3 castles of Ribeauvielle

The entire castle is dominated by the main keep, whose summit offers a magnificent view of the Alsatian plain and the nearby mountain ridges.
It is located on the top of Mount Stophanberch, in Alsace, in the municipality of Orschwiller near Sélestat and Saint-Hippolyte. Owned by the Habsburgs, it passes to the Tiersteins as a fief. They rebuilt it and equipped it with artillery for an adequate defensive system. During the Thirty Years War the castle withstood the Swedish siege but eventually fell, being looted and burned. 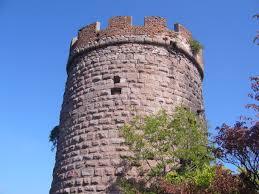 The castle of Saint-Ulrich is one of the three castles overlooking the municipality of Ribeauvillé in the Upper Rhine department in France. It is located at an altitude of 528 m.
The current name of the site derives from the chapel dedicated to San Ulrico d'Augusta which is located in the castle. The medieval texts never gave the current name.

The castle was the principal residence of the powerful lords of Ribeaupierre. On the same site there must have been another castle belonging to the bishop of Basel from 1114. It was occupied militarily by Henry V, emperor of the Holy Roman Empire, who used it as a strength in his war against the Eguisheim. It was then returned to the bishop of Basel who restored it on the Ribeaupierres. 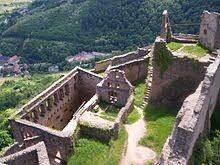 Castle of Girsberg, which was built in the 13th century by order of the Ribeaupierre family. This magnificent fortress overlooks the stronghold of San Ulrich, but, unlike that majestic castle, that of Girsberg was never used as a dwelling, but for pure defensive purposes. This castle passed into the hands of the Girsberg family in the 14th century and still retains many elements dating back to its foundation, such as the beautiful 13th century stone tower. 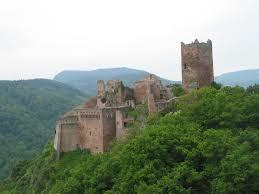 Mulhouse is a town in France located in Alsace located in the Upper Rhine department on the Rhine canal that crosses the neighboring Vosges where a famous battle took place between the Roman Gaio Giulio Cesare and the German Ariovisto. Following the introduction of the Reformation in 1523 Mulhouse clashed with the Catholic cantons. After the Franco-Prussian War (1871) it was incorporated by the newborn Reich Tedesco together with all of Alsace. He returned to France with Alsace after Germany's defeat in the First World War. Nearby you will find other attractions such as the city of the car, the Musée de l'Impression sur Etoffes, the Musée du Papier Peint and L'Ecomusée d'Alsace.

The city of the car preserves one of the most beautiful car collections thanks to the audio guides that tell not only the history of the automobile, but also anecdotes and curiosities, children are involved in a world made of carriages, experimental cars, and cars of luxury, like the Bugatti Royales, dedicated to princes and kings.

If you are in Mulhouse, it is essential to book a greeter, or an inhabitant who offers to show you his city, which will tell you about the human events of the city, this city that was once Swiss in fact there are many Swiss elements. like the statue of William Tell and the facade of the town hall are frescoed by the ancient Swiss, then the city goes to Germany and only after the Second World War it became French. The symbol of the house is precisely the Mulino wheel, in fact the word Mulhouse means the cash register at the mill now converted as an industrial heritage.

The Ecomuseum and the Parco del Principe
The ecomuseum can be said to be a real living village with half-timbered houses and large Alsatian storks and large circles in the sky and inside the houses you will find ancient crafts from the carpenter to the herb cook. Great family experience and entry is free. 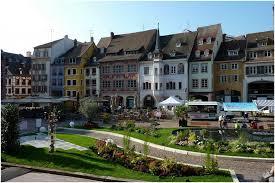 The abbey of Murbach is located in the southern alsace in the valley at the foot of the Grand Ballon in the Vosges, this is one of the oldest and most prestigious Romanesque structures since in 1789 during the period of the French revolution most of them were destroyed by local farmers . the abbey is dedicated to San Leodegario preserved in its original structure only in the transept and in the two towers and in the east part, and the area of the nave and today on a tomb floor. The Romanesque façade is in pink stoneware, the typical stone of the region, and the tympanum of the south portal and two sculpted lions await you 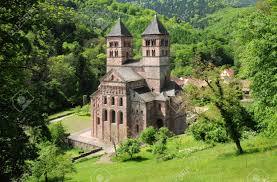 Municipality of Obernai in the Lower Rhine department in Alsace, in north-eastern France. It is located on the eastern slopes of the Vosges mountains.
The region of Obernai, which was the birthplace of St. Odile, daughter of the duke, who would become the patron saint of Alsace.
The name Obernai appears for the first time, when the village acquires the status of a city under the protection of the Hohenstaufen family.
During the Thirty Years War it damaged the city, which was occupied by the imperial troops, then by the Swedes. The ancient glory of the city was born in 1679. 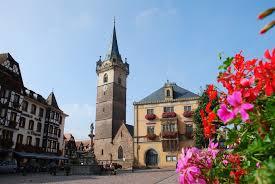 The temple is the symbol of Mulhouse, and the highest priestly church in France boasts splendid neogothic architecture, and is also called the Cathedral of Mulhouse. The building dominates the square and has an ancient origin although the appearance dates back to the nineteenth century.
The structure has beautiful stained glass windows, there are two religious buildings this Protestant temple and the Catholic Church.
The church was built in Romanesque style to which Gothic elements were added

The architect of this project was the local architect Jean-Baptiste Shaqra. The work was done for seven years, and consequently the temple was built in the new Gothic style, whose interior was then transferred to the old stained glass windows of the temple began in the fourteenth century. The height of the bell tower of the new church was 97 meters. The bell is a bell, which is recognized as the largest of those established in the Protestant churches of France. Thanks to the excellent acoustic characteristics of the temple it is often the venue for classical music concerts. 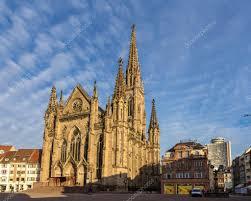 The oragerie park is one of the largest strasbourg parks, 26 hectares large, located near the European Parliament. The park was born as
French-style garden, inside we find a pavilion dedicated to the Empress Joséphine decorated with a collection of orange trees that are now littered by fire, always in the park there is a stork farm that you will meet for the park as they are left free. 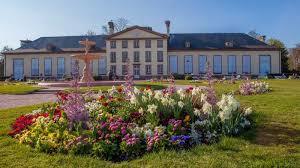