The Eiffel Tower is the most famous monument in Paris, known throughout the world as a symbol of the city itself and of France. The Eiffel Tower was built by Gustave Eiffel on the occasion of the 1889 universal exposition. Located at the end of the Field of Mars , this Parisian monument has become the symbol of France and the French capital. The ground floor allows access to the four feet of the tower. The North foot leads to the three floors of the building through a lift: every single elevator journey can transport 110 people directly to the second floor. You have to use the stairs to go to the top. The first floor is the largest: it houses the Ferrié pavilion, a cinema, a restaurant, shops and a post office to send postcards directly from the top of the tower. 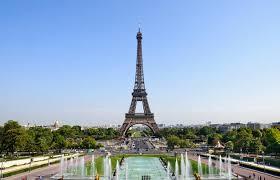 Chateau de Fontaineblea
Napoleon designated it as "House of the centuries, true residence of the kings". It is also the only monument that presents a continuous testimony of the history of France from the 12th to the 19th century. The Renaissance style replaces all medieval elements. Only the thickness of the walls in the royal apartments still retains traces. The new castle is organized around four courtyards: the courtyard of the White Horse, and its horseshoe-shaped staircase, known as the "Farewell Court". In the courtyard of the Fountains, embellished with a statue of Ulysses, water was drawn King's. Inside, even the furniture evolves over time and in events. You can visit the apartments known as "the Pope" and the chapel of Saint-Saturnin. The apartments, in all, were arranged at the time of the day - to the Sovereign Pontiff. 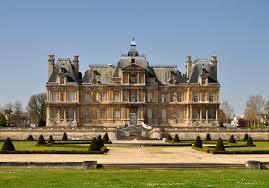 Louis XIII built at Versailles "a hunting appointment, a small gentleman's castle" made of brick, stone and slate, in which he liked it so much that he had it expanded by his engineer and architect. The central terrace, inspired by Italian models, was completed at the death of Le Vau in 1670 by François d'Orbay. It was said that the white stone facades, which surrounded the old brick and stone castle, were still Saint-Simon: "The beautiful and the wicked, the vast and strangled were sewn together". Versailles became the principal residence of the Court of France , at the expense of the Louvre and Saint-Germain: the Hall of Mirrors, symbol of the power of the absolute monarch was raised on the old terrace of the new castle, the last great construction of the era of the Sun King. At the end of the reign of Louis XV, Ange-Jacques Gabriel built the Opera and began to transform the facades on the side of the city. The castle was later transformed under Louis Philippe, who decided to erect a historical museum dedicated to "all the glories of France.

The National opera of Paris

The Palais Garnier is one of the central points of the great works of restructuring of the capital led by Baron Haussmann during the Second Empire. Charles Garnier is the architect. He is admired both for his architecture and for his programs. There is the famous double-revolution staircase that rises under a marble nave of various colors. The houses contain sculptures and paintings in abundance. As for the room, dominated by the colors red and gold, it has a huge and legendary crystal chandelier and a ceiling painted by Marc Chagall in 1964. It can accommodate 1,900 people. A museum tells three centuries of opera history through its collections and temporary exhibitions - it is discovered during the visit of the palace. The Palais Garnier shares its opera productions with the Opéra Bastille, but has remained a high dance venue. Also on the program are some concerts and symphonic concerts. 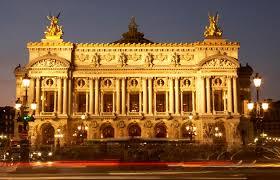 The construction of the Pantheon, commissioned by King Louis XV in honor of Saint Genevieve, ended thirteen years after the architect's death. The building, 110 meters long and 84 wide, is built in the shape of a Greek cross. The decor is also worth a detour: the academic painters Puvis de Chavannes, Gros or Cabanel were commissioned to make it. It was from 1885 that the Pantheon became the place of worship that we know today. This is where the great personalities of French history rest! The first great man to enter is therefore Victor Hugo. Among the personalities that rest in the crypt there are: Voltaire, Rousseau, Jean Moulin, Condorcet, Pierre and Marie Curie, Dumas and soon Simone Veil. The dome has been undergoing renovations for several years thanks to crowdfunding. 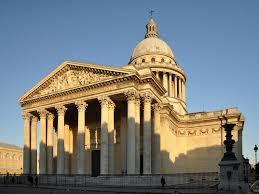 The decoration of the Pont Alexandre III is particularly precious and considered a historical monument since 1975. Pylons 17 meters high rise to the four ends of the bridge. Their tops are adorned with bronze, each telling a different story. At the center of the bridge, two hammered copper models adorn the arch vault. Upstream, the nymphs of the Seine embrace Paris. Opened for the Universal Exhibition of Paris in 1900, the first stone of the bridge was laid by Tsar Nicholas II of Russia in 1896 to symbolize Franco-Russian friendship. 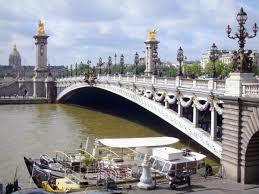 The estate dominates the Marcoussis valley. The castle with its seven courtyards and its park are part of an almost perfect square, according to the architectural canons of the seventeenth century. The main sandstone body is surrounded on each side by a tall and salient pavilion. In the obligatory procession buildings associated with the castle, the garden still produces rare vegetables. Adjacent to the annexes, it is distinguished by an extraordinary dovecote with 4,500 boulins. The park is in classic French style, but also includes an English part where many species meet. Nature is here to discover the rhythm of the seasons and the detour is particularly useful during the events that mark the year: the Spring Plant Festival, at the beginning of April, the Festival of creation and craftsmanship. 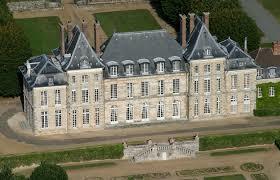 The castle houses the Crew Museum, a magnificent collection of horse cars, carriages, stagecoaches, buses with their restored crews.
With its size, its rooms with refined decorations and the immensity of its park, we can only recommend spending many hours on site to absorb the richness of the place. The large hall, the antechamber of Hercules, the room of the Muses, the room of Louis XV and other painted ceilings of beauty will have no more secrets for you. The view from the dome allows you to see at a glance the perfect layout of paths, terraces, flower beds, green spaces, ponds and statues of the French garden. The park has a total area of ​​500 hectares! What time does it offer to discover its caves, waterfalls, canals and wooded areas. The castle has a changing face every season. Overlooking its facade, water fountains, falling red leaves, a layer of fresh snow that delicately dresses the flower beds and paths on a winter night, all the elements are there to please the walker. Finally, depending on the period, the castle organizes special events. 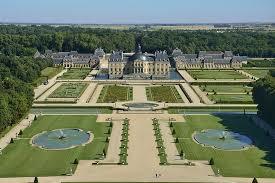 The Louvre museum is one of the most famous museums in the world, the name of the museum derives from the building that houses it. It was the seat of the French monarchy until when Louis XIV came to power, the seat of relief for the palace of versaill which had Louis XIV built. .A feature of the museum is the glass pyramid at the entrance. The important role of France was in the nineteenth century, here in the museum the most famous works are preserved, the museum has eight sections and exhibited in the 60,600 m² dedicated to them.

Notre Dame, the cathedral of Paris, is one of the most beautiful and well-known monuments of the city. Following the Mass or a religious concert in the cathedral takes on a completely different dimension. The Cathedral of Notre Dame is undoubtedly the most beautiful Gothic cathedral in the world and the most famous. The Notre Dame Cathedral is located on the Ile de la Cité island, the area of Paris that divides the city on the left bank and on the right bank of the Seine, and is the seat of the archbishop of Paris. It is also possible to climb the towers of Notre Dame, along 387 steps: the view that will open from the top of the 69 meters, will show a spectacular Paris. 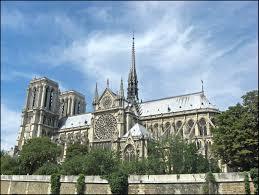 Arch of Triumph
The Arc de Triomphe is one of the most famous monuments in Paris. It is located in the center of the Charles de Gaulle square (initially Place de l'Etoile), at the western end of the Champs Elysées avenue. The Arc de Triomphe pays tribute to those who died for France during the French Revolution and the Napoleonic wars. Under the arch is the tomb of the Unknown Soldier of the First World War.
The monument was designed by Jean Chalgrin in 1806 by Napoleon and inaugurated in 1836 during the sixth anniversary of the Three Glories. 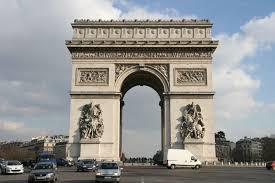 The museum, famous for the numerous masterpieces of impressionism and post-impressionism on display, is located opposite the Musée du Louvre, in a former railway station built in an eclectic style at the end of the nineteenth century. It exhibits works of art created between 1848 and 1914 and its collections include paintings, sculptures, decorative art objects, photographs, medals, drawings and prints.

A few steps from Paris is also the basilica of Saint-Denis, built in its present form in 1136 and considered the first example of the French Gothic style. The emptying of the characteristic masonry structures of the Gothic, allowed the building to accommodate large windows, some of which are among the oldest in France. Particularly noteworthy are the two north and south rosettes, the first to appear in a French religious building. The cathedral is also known as the burial place of the kings of France from the 10th century to 1789 and houses around 70 burials. 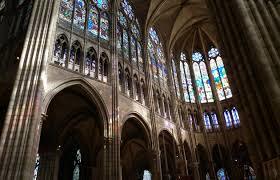 The town of Fontainebleu

The town of Fontainebleu, famous for its Renaissance castle. Less well known than Versailles but equally interesting, this palace was also used as a residence by some French monarchs and deserves to be seen for the beauty of its rooms and its gardens. In addition to the castle, the town of Fontainebleu is home to a vast forest, which someone will remember as one of the subjects of impressionist painting. The beauty of the woodland complex, a source of inspiration not only for painters, but also for photographers and writers, has meant that this area was protected as an "art reserve" and therefore removed from various logging projects. 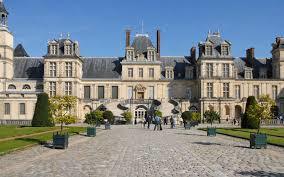