Bayonne is located at the beginning of the Adour estuary, at the point where it receives the waters of the Nive river. Bayonne is an important trading port. The Gothic cathedral is located in the center of Bayonne. Interesting is the combination of ocher stone (the oldest part) and white (the most recent), which gives it a characteristic appearance. Even the two spiers, 70 m high, are of two different colors. The stained glass windows are very beautiful, representing biblical scenes or geometric motifs. I recommend a visit to the cathedral and the adjacent cloister. 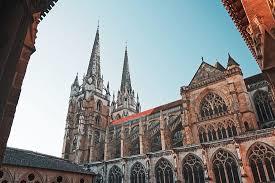 The monument is in a medieval style of austere appearance, perched on the top of a limestone cliff that dominates the village on the right bank of the Dordogne.The castle has the shape of an irregular quadrilateral, extended to the south by a rocky bastion. The dungeon, surmounted by battlements, dates back to the 13th century. Protected by a double wall, the castle dominates the Dordogne The castle was built from the 12th century by the barons of Beynac to block and control the valley. 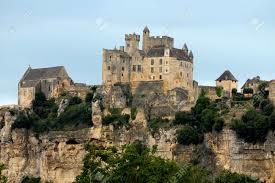 Is a Catholic church in Bordeaux, in the Gironde department. The church is one of the main places of worship in the city and has the peculiarity of having the bell tower. It became a minor basilica in 1903, it has been inscribed on the UNESCO World Heritage List since 1998, as an intermediate destination of the Via Turonensis , one of the routes to Saint Jacques de Compostella in France. 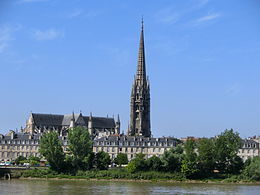 The Basilica of San Severino

The Basilica of San Severino is a Catholic church in Bordeaux, in the Gironde department, dedicated to Saint Severinus of Bordeaux.
Classified as a historical monument of France in 1840, it has also become a World Heritage Site for UNESCO since 1998 as an intermediate destination of the Via Turonensis, one of the routes to Saint Jacques de Compostella in France. 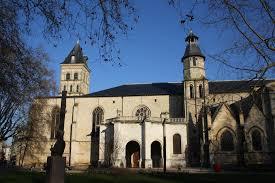 The cathedral of Sant'Andrea

The Cathedral of Saint Andrew is a cathedral located in Bordeaux, France. In the Romanesque style, it was consecrated by Pope Urban II in 1096. The project involved the construction of four towers, but the marshy ground that threatened not to support its weight allowed the realization of only two. A beautiful monument that attracts many tourists. 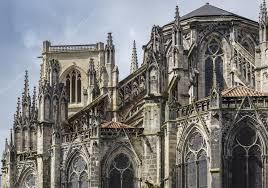 The church of Santa Croce

The church of Santa Croce is a place of Catholic worship located in Pierre Renaudel square in Bordeaux, France, formerly the abbey church of an ancient monastery. The abbey of Santa Croce was built in the Merovingian age near a tributary of the Garonne on a relief of the land in a marshy area south of Bordeaux.
The church, in Romanesque style, dates from the late 11th or early 12th century and is therefore coeval with the churches of Soulac-sur-Mer (Notre-Dame-de-la-fin-des-Terres) and Macau. The interior of the church has a Latin cross plan, with a single nave, a protruding transept with large chapels at the ends and a polygonal apse. The nave consists of five spans covered with a cross vault.
Among the works of art housed inside the church there are two paintings by Guillaume Cureau, depicting Saint Mommolino freeing a demon and San Mauro healing a sick person, and a painting by A. Bourgneuf (1636) depicting the Exaltation. 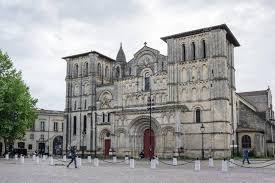 The Cathedral of Our Lady is the cathedral of Dax, in France, and mother church of the diocese of Aire and Dax since 1933. At the end of the 11th century, the bishop decided to take the cathedral outside, building it in Romanesque style in the place where there was a small chapel. In a period of prosperity for the city.The current building, in classical style, a Latin cross, is 72 meters long and 39 wide at the transept. The main façade and the southern side appear massive and austere, while the northern side, which faces a small square in the historic center of Dax, although pleasing to the eye, appears more rigid. The interior, with three naves, is very bright for large openings that allow light to enter copiously. The 18,80 meters high central nave is separated from the lateral ones by Doric, Ionic and Corinthian quadrangular pillars that support the balconies of the stands and the double round arches decorated with carved motifs. 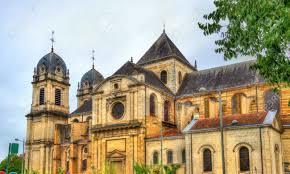 The Cathedral of Saint Louis is the main place of Catholic worship in La Rochelle, in the department of Charente-Maritime, in France. The church is the seat of the diocese of La Rochelle and has been a historical monument of France since 1906. 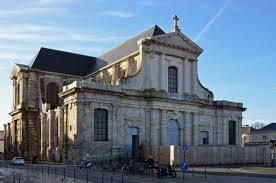 He is Lespinault, municipal administrator of Nérac, who first undertook excavations in the park of La Garenne, where he brought to light the ruins of a Gallo-Roman villa in 1832.The villa contains mosaics dating from the 4th century. A thermal structure adjacent to the villa was rebuilt along the Baïse river at the end of the 4th century. Public works, undertaken on the road to Nazareth, brought to light other remains of the Roman villa. With the resumption of the excavations new fragments of mosaics are found on a length of 45 meters. The mosaics are detached and deposited in the municipality. 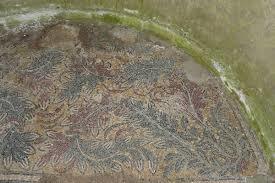 Castle of Pau
Pau Castle is the main monument of the French city of Pau, capital of Béarn, in the department of Pyrénées-Atlantiques, in Aquitaine. The building, one of the most beautiful castles in southern France, is classified as a historical monument.
The castle is now home to the Musée Régional Béarnais. In the period halls are displayed 18th century furniture and a collection of Flemish tapestries.

St. Peter's Cathedral is the main place of Catholic worship in Poitiers, in the department of Vienne.The church, home of the bishop of Poitiers, has been a historical monument of France since 1875.In Angevin Gothic style, it was begun in 1160 by the will of Eleanor of Aquitaine and Henry II of England, but was consecrated only in 1379. The façade is flanked by two unfinished towers and refers to stylistic models of northern France.All inside it preserves the 13th century stalls and a series of stained glass windows from the 12th and 13th centuries, including a crucifixion considered one of the best accomplishments of French medieval glass art. 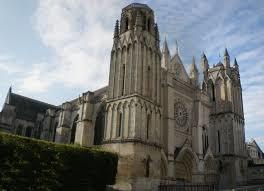 The church of Notre Dame

The church of Notre-Dame the Great of Poitiers, is a collegiate and parish church built in Romanesque style. The church has been classified as a historical monument since 1840. Its façade is considered one of the masterpieces of Romanesque sculpture. Built in local limestone it has a light color typical of the buildings of this region. It has three levels of horizontal decoration divided by cornices.
The entire building was rebuilt in the second half of the 11th century, during the Romanesque period, and inaugurated in 1086 by the future Pope Urban II. 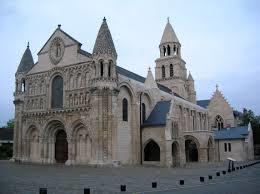 The Co-Cathedral Basilica of St. Peter

The Co-Cathedral Basilica of Saint Peter is one of the main religious buildings of Saintes, second largest in the department of Charente-Maritime, in France.
It was the seat of the diocese of Saintonge until 1802, when the diocese was reunited with that of Aunis, whose headquarters was placed in La Rochelle. Stripped of its title of cathedral church. The bell tower is one of the most noteworthy elements of the cathedral of San Pietro in Saintes is its bell tower-portico, which dominates the urban landscape of the ancient capital of the Saintonge. The western portal is formed by a ogive in a pointed arch with four arches on which there are representations of angels, apostles and characters of the Old Testament. 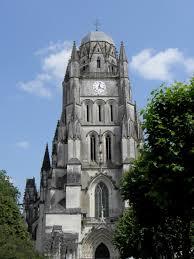 The baptistery of San Giovanni in Poitiers is considered the oldest existing Christian building in France, and one of the main examples of Merovingian architecture. The central part of the building was built around 360, taking advantage of the Roman building foundations that had been demolished in 276, in the area where, at the house of Saint Hilary of Poitiers, the cathedral was to be built. Over time there were many changes in the original structure.
The baptistery resumed its ecclesial function in the mid-twentieth century, after excavations that recovered the original baptismal font and allowed a more precise dating. 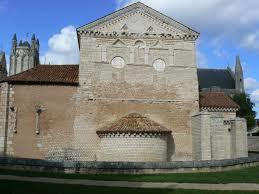 La Sauve-Majeure abbey was an abbey located in La Sauve, in the Gironde department. Its ruins represent an interesting example of Romanesque architecture.
The abbey was founded on 28 October 1079 by St. Gerald in a large forest between the Garonne and the Dordogne given to him by William, count of Poitiers. The abbey was declared a historical monument of France and in 1914 some surrounding lands were also placed under protection on which stood ruins. From 12 April 1929 also the external ruins had the classification of historical monument. Finally, on 9 April 2002, even the land remaining after the 1929 decree was declared a historical monument. 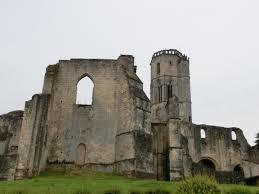