Historical monument in Bologna and small country in Emilia Romagna

Piazza Maggiore It is the heart of the city and is the result of centuries-old transformations that enriched it gradually with important buildings: Basilica of San Petronio, Palazzo dei Notai, Palazzo d’Accursio, Palazzo del Podestà and Palazzo Bianchi. 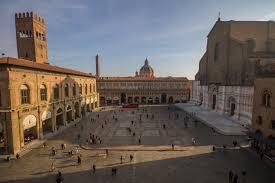 Fontana del Nettuno It is located in the center of Piazza Maggiore. In marble and bronze it was built by the Flemish Giambologna (Jean de Boulogne, Douai, 1529 - Florence, 1608) to a design by the Sicilian Tommaso Laureti in 1563. It symbolizes papal power: as Neptune dominates the waters the Pope dominates the world. At the foot of the God there are four cherubs representing the largest rivers then known: the Ganges, the Nile, the Amazon and the Danube. Palazzo Re Enzo It is called Palatium Novum because it is next to the Palazzo del Podestà, which is older; was renamed King Enzo for being the prison of Frederick II's son defeated by the Bolognese at the Battle of Fossalta in 1249. The palace can only be visited in part. 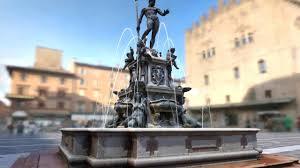 Basilica of San Petronio It was built in 1390 to celebrate the victory of the Bolognese over the Florentines and the Pope. It is a civic temple, never completed, its works lasted until the seventeenth century. The façade is in pink marble and brick. The central door was designed by Jacopo della Quercia and depicts scenes from the Old and New Testament.
The sundial, the largest in a covered place, was built by the geographer Cassini in the 18th century. Among the chapels the IV from the left (Bolognini) stands out, which preserves frescoes by Giovanni da Modena. 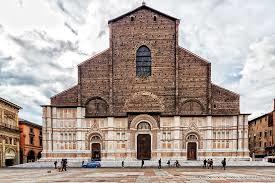 The Two Towers They are the symbol of the city of Bologna which in the Middle Ages had about seventy towers and tower houses. The construction of the Garisenda was begun around 1120 to celebrate the expulsion of the imperial legate but was soon abandoned due to the slope of the land and the consequent danger of collapse. The so-called Torre degli Asinelli was then started from the name of the family to which it was entrusted. High 97 meters for a total of 498 steps is always kept under close observation like the Garisenda. 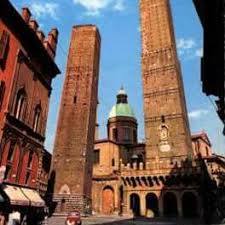 Palazzo della Mercanzia Said Loggia dei Mercanti. Built by Antonio di Vincenzo in 1384 in terracotta and marble in mullioned windows and in the Gothic-style canopy it is characterized by two pointed arches and, at the top, by a long frieze with the coats of arms of the city's guilds. The niches host the protectors of the city on the right and left and Justice in the center. It was destroyed by bombing during the Second World War and rebuilt. 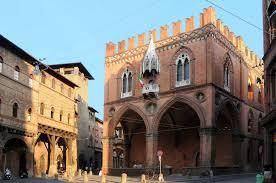 Basilica of Santo Stefano It is actually a complex of churches called Santa Jerusalem because it recalls the Passion of Jesus. It was built starting from the VIII century by the will of the Lombards who made it their church. To the left is the church of San Vitale and Agricola, so-called for the relics of the Bolognese protomartyrs preserved here, followed by the Church of the Holy Sepulcher which houses the remains of San Petronio and the Church of San Giovanni Battista. Inside two medieval cloisters, the Church of the Trinity and the Museum of Santo Stefano. 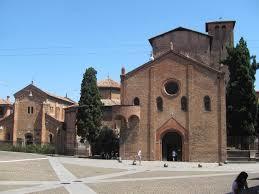 Palazzo dell'Archiginnasio It was the seat of the University of Bologna from the 16th century until the arrival of Napoleon in 1803: he transferred his studies to Palazzo Poggi and transformed the Archiginnasio into the Municipal Library. The palace was built by the architect Francesco Terribilia. Inside there is the Anatomical Theater in cedar wood and fir of the XVIII century, it was the site of the experiments in the fields of the Faculty of Medicine. 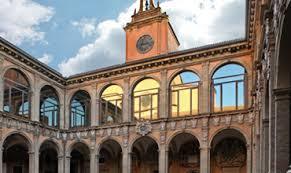 Basilica of San Domenico Its construction was begun shortly after the death of the saint (around 1220). The beauty of the architecture is due to the tomb of San Domenico inside. It was built at various times: the sarcophagus (13th century) of Nicola Pisano, Arnolfo di Cambio and students representing episodes from the life of the Saint.The crowning (cimasa) is by Niccolò, called, after the realization of the masterpiece, Dell'Arca. The right-wing Ceriferous Angel is Michele. To visit also the wooden choir of Fra Damiano Zimbelli. The marriage of Santa Caterina by Filippo Lippi, the Crucifix by Giunta Pisano and the Fifteen Mysteries of the Rosary, a collective work by the most important Bolognese painters (Cesi, Carracci, Reni, Sirani). 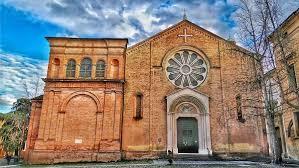 The Portici of San Luca

For a good 40 km the city is crossed by arcades that are not only architectural elements but represent the very essence of the city. They are the open-air metro of Bologna, covered routes that allow you to reach every point of the city. 4 km from the center of Bologna we find the first portico that leads to the church of San Luca, symbol of Bologna. 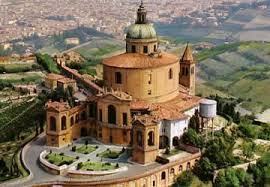 The statesman Marco Minghetti, Giorgio Morandi, Giosue Carducci, Lucio Dalla are just some of the characters who rest in the Certosa Cemetery, founded in 1801, reusing the structures of the Carthusian convent built starting from 1334. The intact testimony of the lost wealth of the convent, suppressed in 1796, is the Church of San Girolamo. Throughout the nineteenth century the Certosa was the preferred destination for walks by Lord Byron, Charles Dickens and Theodor Mommsen. 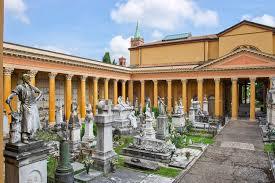 5 historical monument in the small country in Emilia Romagna

Palazzo Schifanoia from the past to the present

The first thing that attracts the attention of this building is the name "schifanoia", the name suggests exactly the first thing that came to mind when you heard it, or "disgust boredom", in fact the building was built with the function to give rest and recreation to the members of the short estense. the palace is today a museum of ancient art. 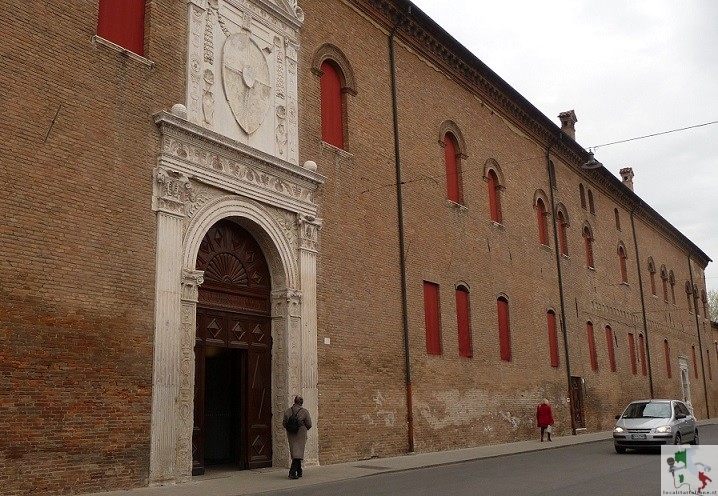 Brisighella, the village of the "three hills"

Nestled in a still intact natural scenery, Brisighella is one of those villages that you can't miss seeing at least once in your life. Of medieval origin this village rises in the province of Ravenna at a height of about 115 meters above sea level. The village is characterized by the presence of three rocky pinnacles known as the three hills on which rest the fortress Manfrediana, the sanctuary of Monticino and the clock tower. The origin of the name of this medieval village is not yet certain. 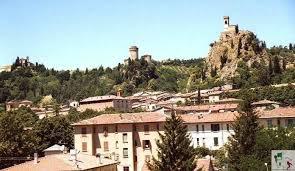 The ducal palace of Sassuolo, from castle to residence

The municipality of Sassuolo is particularly known in Italy as an industrial center specialized in the production of ceramics and tiles. The city, however, has now also reached a certain tourist weight mainly thanks to the presence of the Palazzo Ducale which, since it passed into management at the Emilia Romagna museum complex, in 2014, reached 22,394 visitors in just two years. The history of the ducal palace The ducal palace that today everyone can admire, owes its appearance and its shape to a castle, commonly called Rocca, and which was subsequently transformed into a ducal residence.

The synthesis of everything that represents one of the most beautiful places to visit in Emilia Romagna, Parma are art, history, culture and good food. . A city rich in squares and historical monuments, such as the beautiful Piazza del Duomo, with its Cathedral, the Baptistery and the Bishop's Palace; the Monastery of San Giovanni Evangelista with its beautiful frescoes made mostly by Correggio; The Palazzo della Pilotta, home to the Farnese Theater, the National Archaeological Museum, the Palatine Library and the National Museum; and again the Teatro Regio; the Certosa 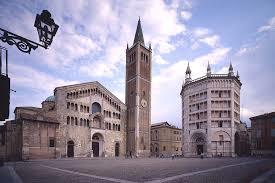 Fontanellato, always located in the province of Parma, the entrance to the historic center, complete with an arch and small bridge, recalls the access to a castle. And the castle, that is the Rocca Sanvitale, is really there, a few meters further on. And it is surrounded first by water and then by arcades, under which people stop for a coffee and a chat and where you will find the sign of some ancient shop. 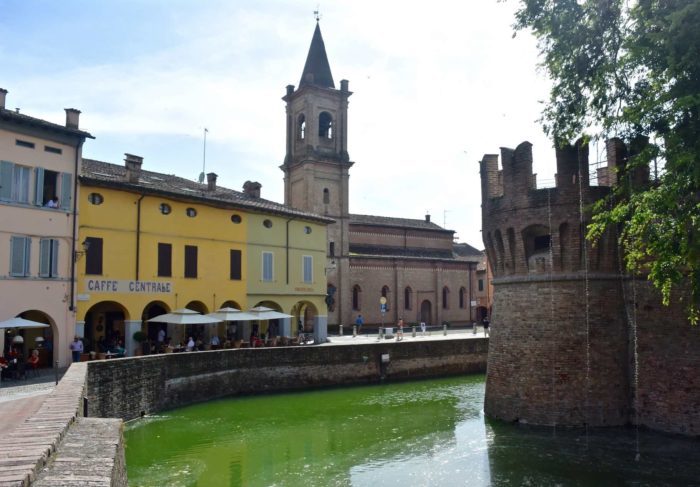