What to do in Normandy?

It  is a tidal island located near the northern coast of France. The Mont Saint-Michel is one of the three major European places of worship named after Saint Michael the Archangel. The bay where the rocky islet is located is subject to the phenomenon of quicksand, but it is known above all for the amplitude of the tides. Here stands the famous abbey. An important tourist resort, depending on the tides from the island it turns into a hill. A bridge-bridge was built to cross and reach the Mont. Placed on pylons it allows the water to circulate, and as soon as the tide passes the Mont it finds its maritime character. 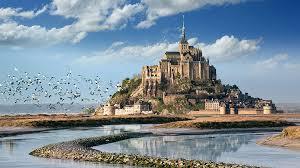 It is a French city. It has an important number of historical monuments, the main ones were built under William the Conqueror in the 11th century. Below the city stretch of blond stone quarries, but now closed. Until 2014 Caen was divided into nine cantons, of which it was the capital. It also has an important university. 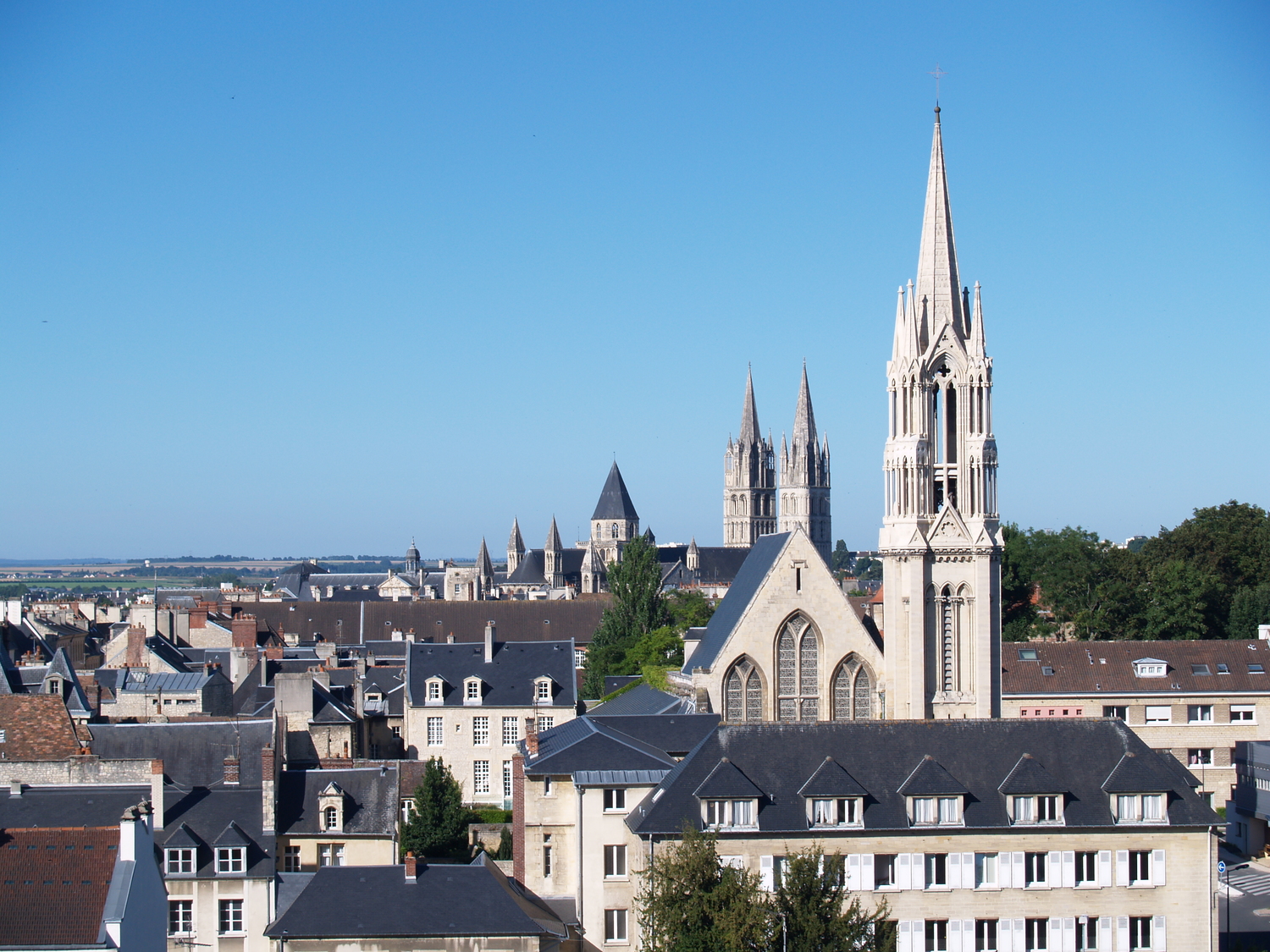 It is a city of France. It is one of the most important art cities in the country, in fact it preserves many Gothic monuments, a historic center of ancient trellis houses. It is also home to an archdiocese. It is known for its heritage of Gothic architecture, including both churches and palaces. It is divided into three cantons. It is one of the fundamental stages of a journey. Both day and night it is impossible not to be enchanted by this beauty. It is renamed the city of 100 bell towers for its great church patrimony. During the Hundred Years War Giovanna D'Arco was burned at the stake, in fact a cross was placed on the site. Even today there are celebrations for worship.

In the village of Giverny is the house where Claude Monet lived and died, today it houses the foundation in his honor. Claude Monet settles in the village, rents a house and changes it, building a flower garden. He also digs a basin of water lilies at the edges on an Epte branch, and so he paints the picture The water lilies. In the same period many mostly American painters settled in the village. 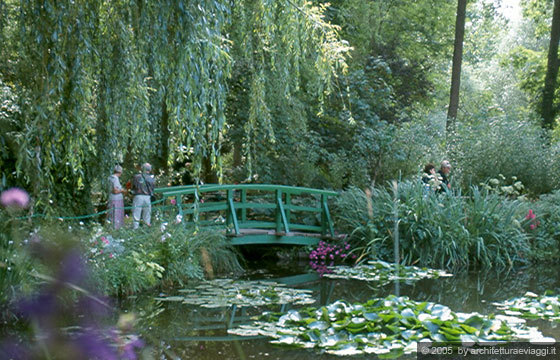 The city is known for the famous Tapestry in the municipal museum as well as for the Gothic cathedral. There is also a municipal botanical garden and a memorial to all journalists killed in the post-war period. It is also a tourist destination due to its geographical position for the Normandy landing in 1944. This is remembered with a small museum. It is a medieval city that boasts a great architectural heritage. 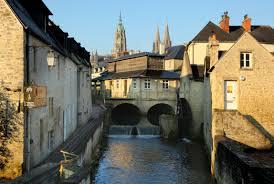 The city is important for its port overlooking the English Channel. It is divided between the upper and lower cities. The climate is oceanic. It is the most big common of the Normandy. The city has many theaters and museums. It also received the "City of Art and History" award. The port for the exchange of goods and fishing is very important. It is the largest municipality in Normandy. 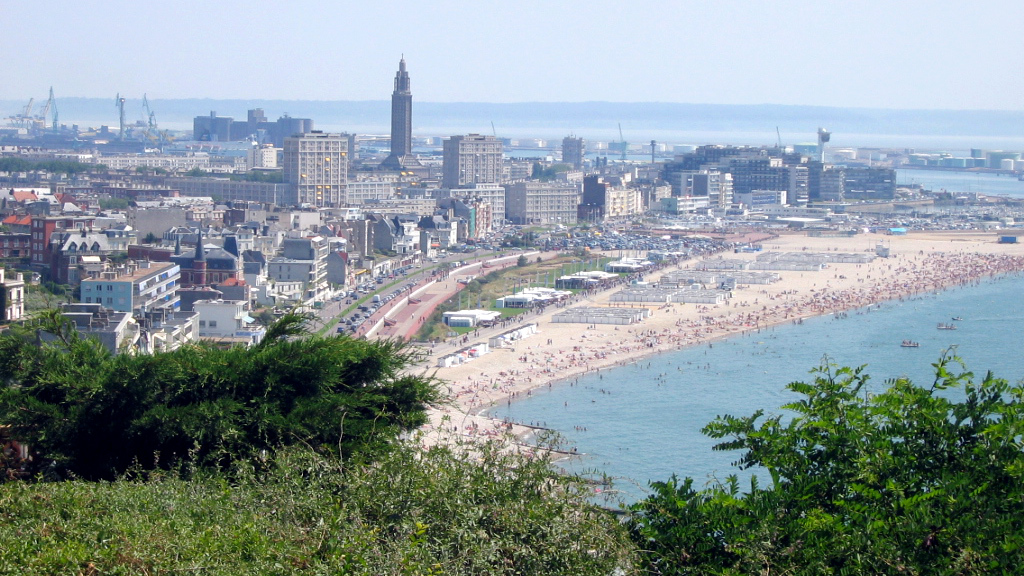 The name derives from the old word fleot which means river. The first written mention of Honfleur is a quote from Richard III. In this city is a composer, a painter, a humorist. Many painters have come here to paint. Over the centuries it was one of the main ports for the slave trade. A characteristic feature is the houses that overlook the Seine. From painters it was a destination of inspiration. It has a great cultural and architectural heritage. It has many churches, museums, monuments. 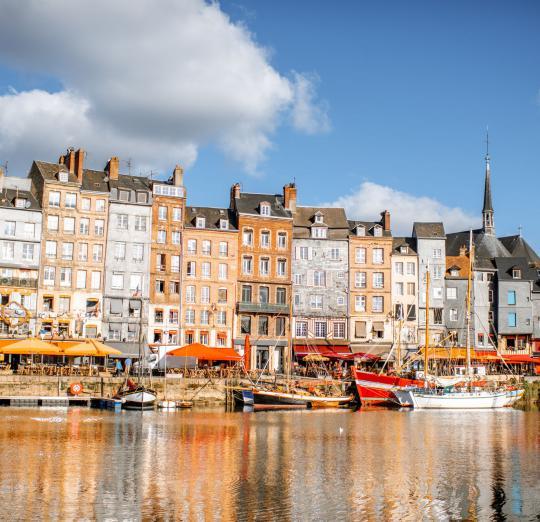 It was built by the British to guard Mont Saint-Michel. It is built on a rocky promontory with houses with white shutters and it seems that the mountain of shells with the beach was built in the lower town.  Granville is the home-port of the 'Marite', the last wood-built Newfoundlander. It became a popular seaside resort. The city has many museums. It is a very popular tourist destination. It is also possible to reach "Villa les Rhumbs" from the 19th century, where Christian Dior and his family spent every summer. It is a city full of plants and flowers but also important for art museums. The heritage of the City of Granville consists of tourist sites. 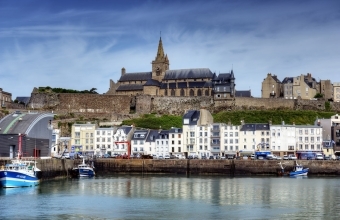 The history of Trouville dates back to the Middle Ages when it was a small fishing village. It is famous for its picturesque port and cultural and architectural heritage. It was discovered by the artists. It attracted a crowd of artists in search of rest and inspiration. It is precisely because it retains the charm of its time that visitors are appalled. 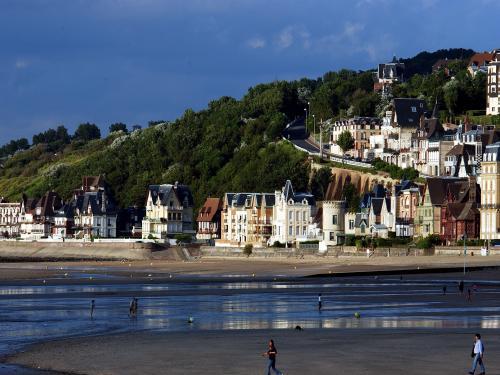 In this area once stood an important oppidum and the remains were found. Even a fragment of one of the oldest Celtic knit ribs was found. It was the scene of dramatic events with the war of a hundred years. During the Second World War the city was bombed by the Germans and occupied it for 4 years. Only on 25 August was it freed by British troops. It has many monuments. 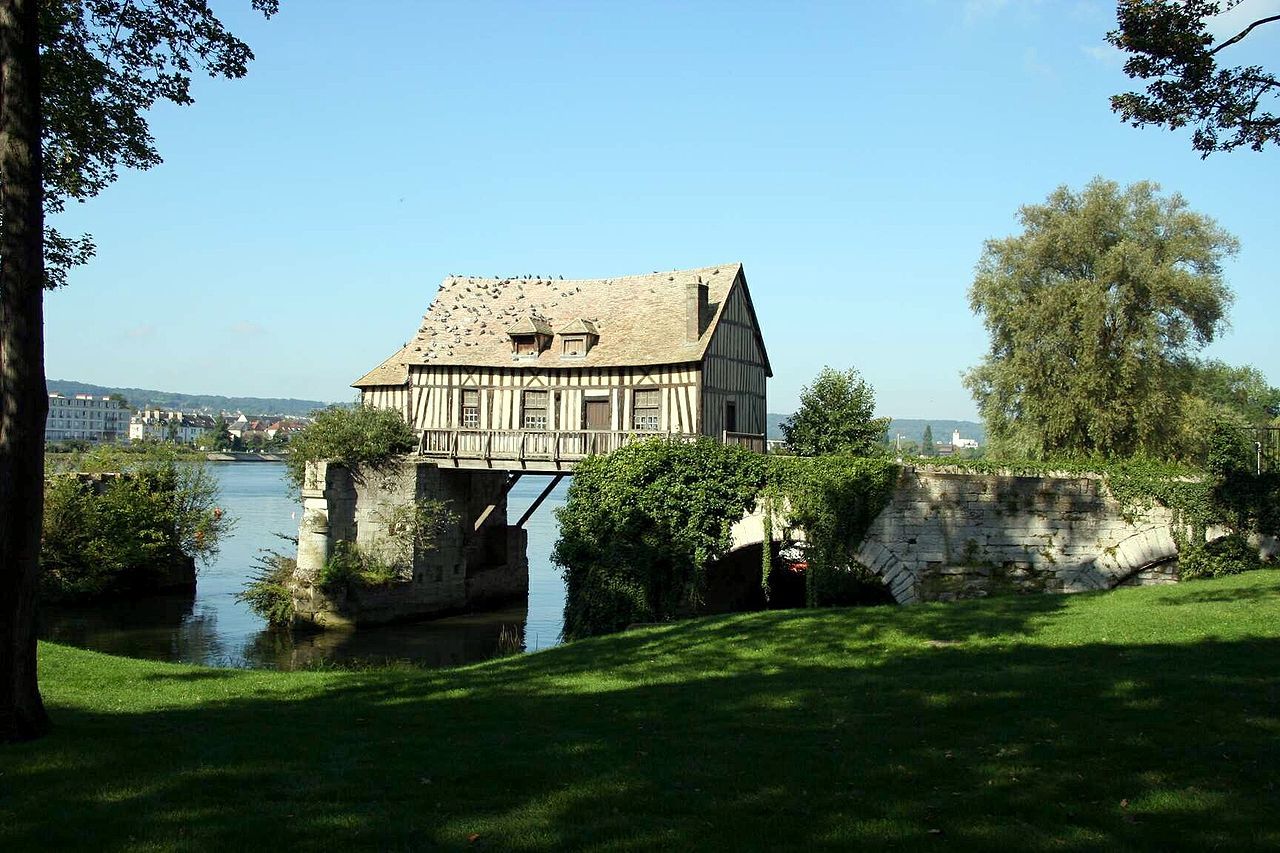 It is the code name given by the Allies and one of the five beaches on which the Normandy landings occurred. The first troops to land on the beach were those belonging to the 29th American Infantry Division. The greatest number of losses was recorded on this beach. It is full of natural obstacles, steep cliffs and wide tides. Even underwater they were obstacles like barbed wire nets. All this was an obstacle to the assault by the Allies. The remains of German fortifications are still present and can be seen on the beach. There are also monuments to remember the battle. Above the beach is also the American Military Cemetery of Colleville-sur-mer. 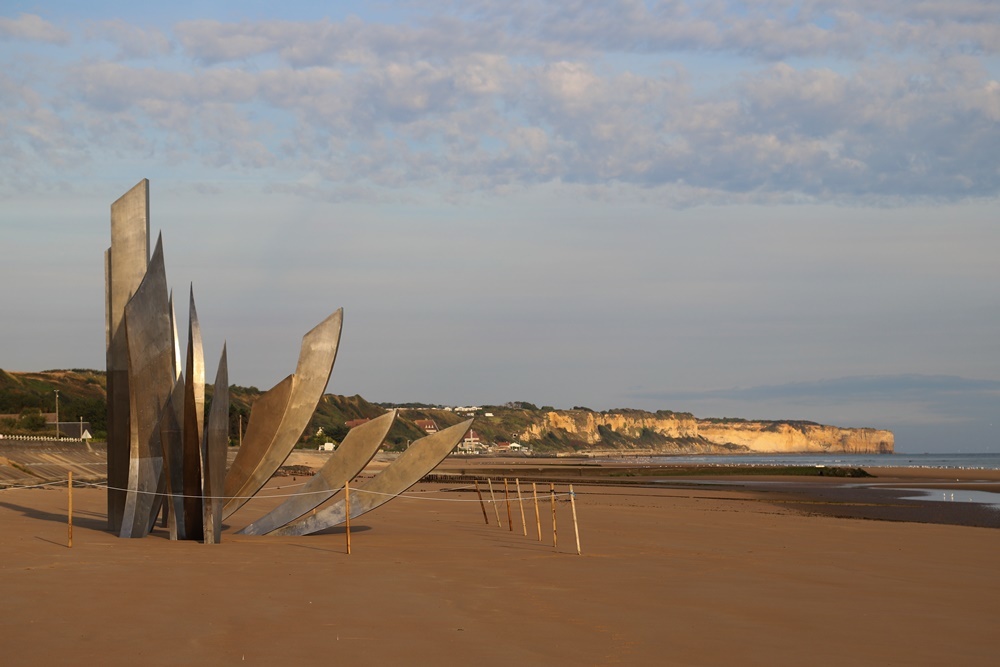 It was originally a fishing village, today it is one of the most popular seaside destinations for its gravelly beauty, for its natural limestone cliffs overlooking the sea that include a famous natural arch. They have attracted many artists, painters and writers. The beauty is also given by the many white chalk cliffs.  High and low tides are very frequent. It is a small jewel with blue roofs. 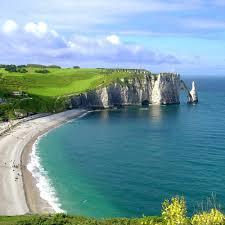 It is a stretch of coast overlooking the English Channel. The area is famous as the place where the Allied landing took place. This is remembered with many cemeteries and museums. This place is witness to the horror that has been consumed over the years. Visiting the impressive Normandy American Military Cemetery and Memorial is indispensable for reconstructing one of the bloodiest pages in the history of the 20th century. 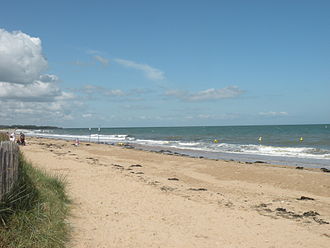 A very important and beautiful tourist destination. Famous for example is the promenade of Cabourg named after Marcel Proust, a great French writer who frequented this place present in one of his most famous novels. The casino is also important. Also famous are the horse auctions in which many buyers participate. Another feature is the port area fishing boats, yachts, and sailboats that are the backdrop to art galleries, restaurant. Another is the Normandy bridge. 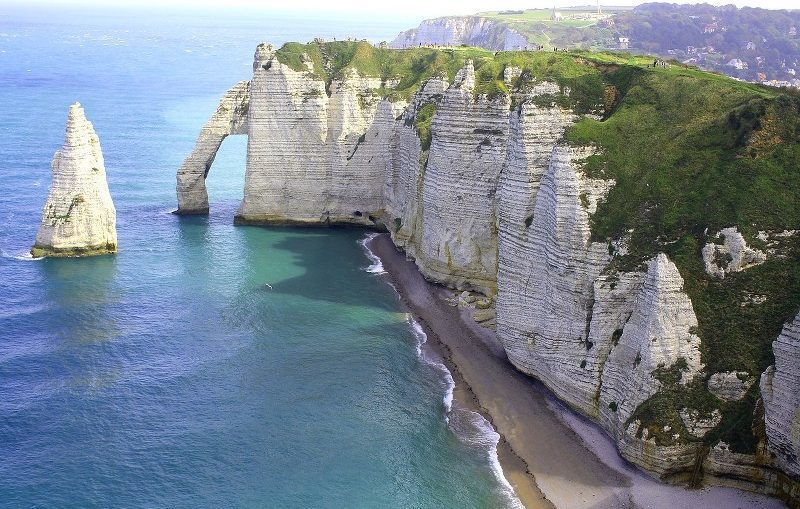 A luxurious and most popular resort among all of Normandy. It has a sandy beach for a walk by the sea. The colors of the old-fashioned curtains, deckchairs and umbrellas give it an appearance of the 1920s. Important attraction is the port. International sailing events are also hosted. This attracts many visitors. An elegant and refined town just like fashion boutiques or restaurants. 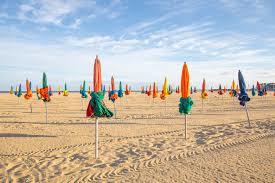 Barfleur is a Norman fishing village with granite stone houses lined along the harbor. Originally it was an important seaport for the Anglo-Norman kingdom during the period of William the Conqueror for its advantageous position on the English Channel. Today it is still a very popular fishing port, with small boats that unload fresh catches daily. Traditional restaurants can sample local cuisine, especially seafood. It is a city by the sea with nearby beaches and coastal paths. 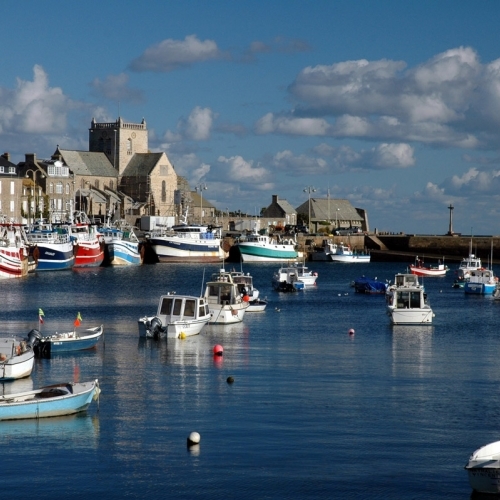 The world fame of this city is given by the Catholic pilgrimage to Saint Therese of Lisieux. Its origins date back more than 2000 years ago, witnessed by the traces of the Roman occupation, barbarian invasions and Scandinavian pirates. The painter Charles-Alexandre Coëssin de la Fosse was also born here. 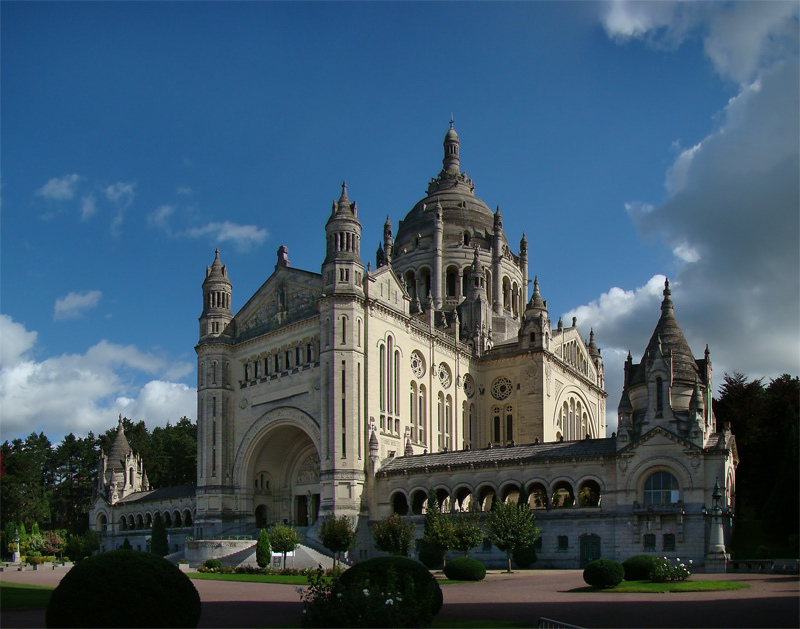