What to see in Sicily?

The best monuments in Sicily

Palace of the Normans in Palermo:

It is one of the most visited monuments un the whole of Sicily and the oldest royal residence in Europe. It once housed the sovereigns of Sicily and was an imperial seat with Federico II and Corrado IV. The main entrance is in Piazza Parlamento, then we have the Palatine Chapel, the Pisan Tower (home of the treasure room), the Sala dei Venti and the hall of King Ruggero. Since 1947 Palazzo dei Normanni is the seat of the Sicilian Regional Assembly and the west wing has been assigned to the Italian Army. It is one of the most visited monuments on the island. After the coronation of 1130, Roger II ordered the construction of the Chapel of the Palace. On an architectural and decorative level, it represents the encounter between different cultures and religions, namely Byzantine, Islamic and Latin. It is defined as the most beautiful in the world, the most wonderful religious jewel. 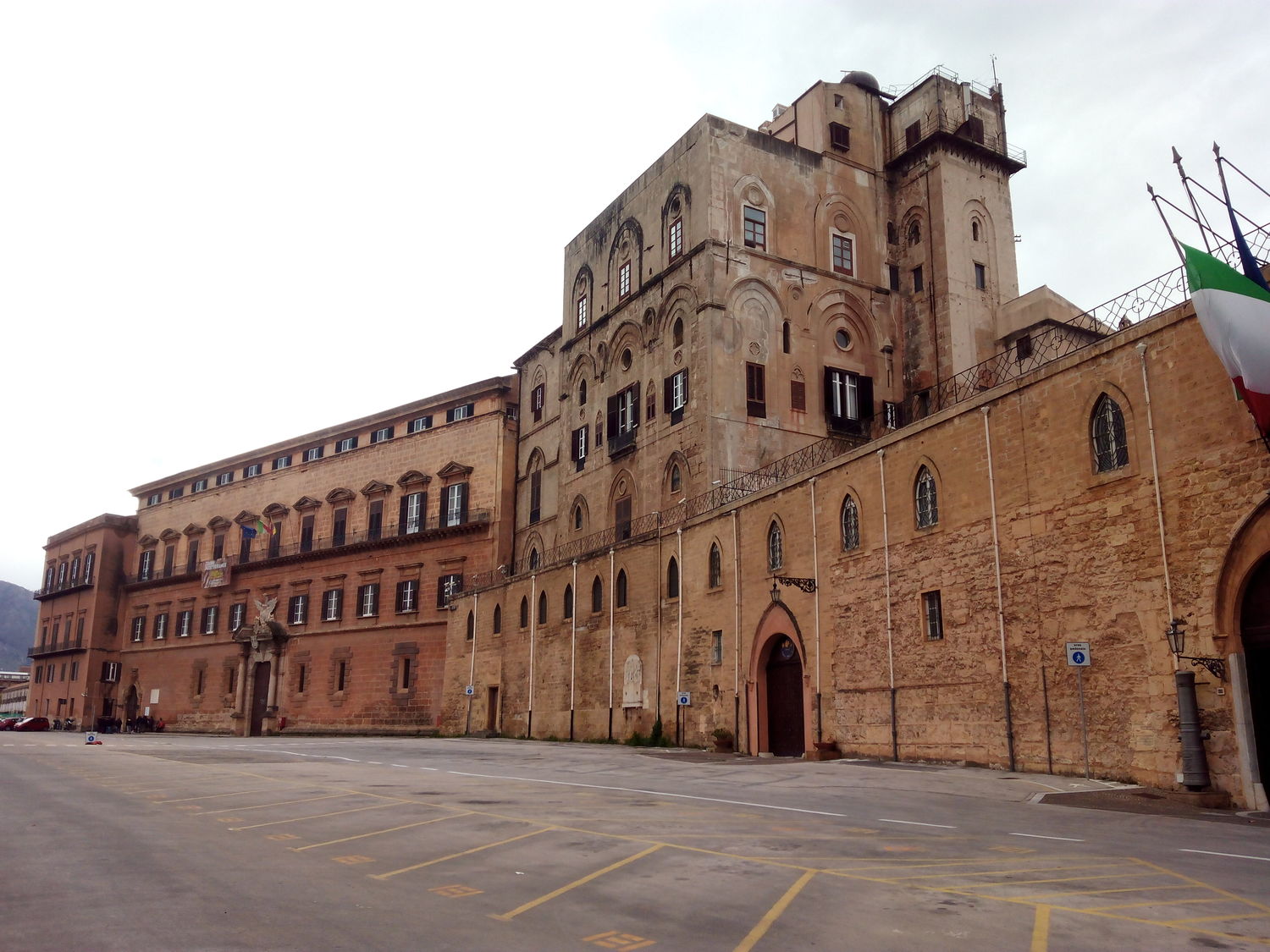 The Cathedral of Cefalù

It is one of the most representative monuments of Arab-Norman art in Sicily. It was built in 1131 by will of Roger II of Altavilla. Legend has it that during a sea voyage from Salerno to Palermo, the king's ship came across a terrible storm and panic made a vow to the lord to build a huge monument in case they were not saved. For the exterior, the church is located at the top of a staircase and with two high side towers, but it looks more like a castle than a church. Over the years it has undergone changes that have somewhat changed the architectural styles of that time. 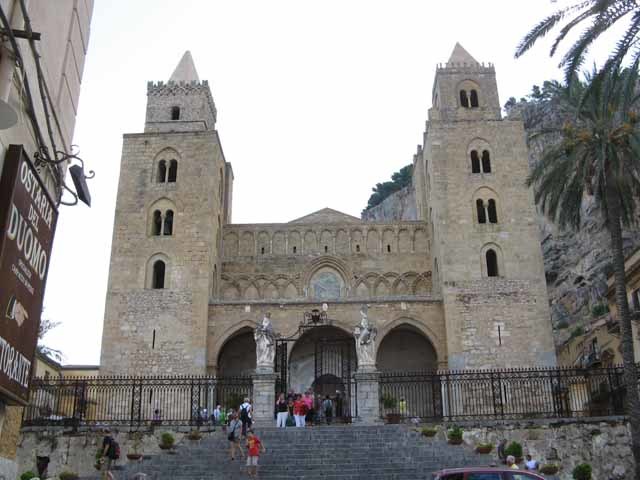 The greek theater of Taormina

It is the most impotant and best preserved ancient monument. The building was rebuilt in Roman times and more precisely in the 2nd century AD The theater of Taormina, by size, is the second in Sicily after the one in Syracuse. Since the 1950s the Theater has been exploited to host various forms of entertainment ranging from theater to concerts, from award ceremonies for the David di Donatello to symphonic concerts, from opera to ballet.

The elephant fountain in Catania

It is the most famous monument in the center of the cathedral square  in Catania. It represents an elephant that supports an Egyptian obelisk and indicates three different civilizations: the Punic one (elephant symbol of the Carthaginian defeat), the Egyptian one (indicated by the bishops) and the Christian one (I note from the cross on the obelisk). the monument also represents the union of the elements of nature as the land irrigated by rivers that is education but at the same time also reconstruction. 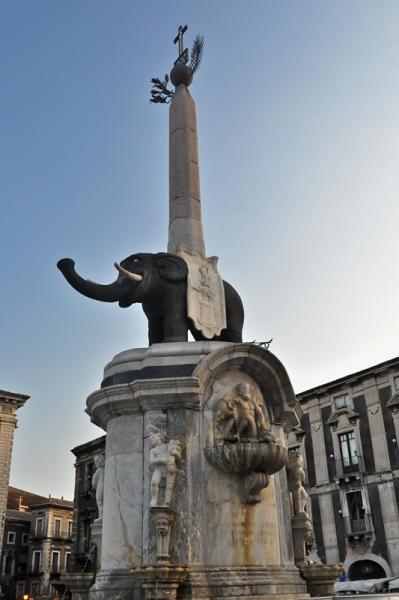 The Maniace castle is one of the most important monuments of the Swabian period in Syracuse and one of the most famous Frederick castles. It has a quadrangular plan surrounded by a mighty wall with four cylindrical towers on the sides. Inside, the environment is organized in a single room. The reason for building this castle in Syracuse was to protect and defend the city. 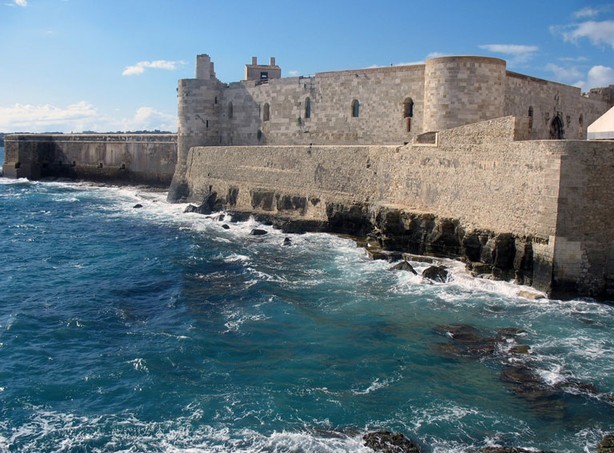 Archaeological excavations in the mid-twentieth century brought the theater back to the conditions in which it is found today, making it become an important center. The arrangement of the area recalls an idea of the tyrant Dionysius I who wanted to transform the Neapolis district into a monumental area to preserve many of the architectural testimonies of the classical city. 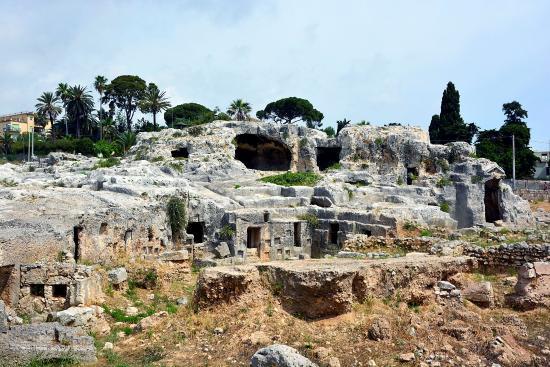 Temple of Concord in Agrigento

Today, it is one of the best preserved temples of all antiquity.  Its beauty survives despite everything. Unlike the other temples, the sources do not pass on to us which divinity was dedicated. Over time it has undergone changes, ie the pagan altar was eliminated, a cell was opened. From the outside you can see the imposing Doric style colonnade that rises above a stone base. Its triangular structure is simple and without decorations.

Stair of the Turks

The stair if Turks is located in Realmonte, and protects some of the most beautiful beaches in Sicily. It consists of a limestone and clayey rock with a characteristic white color like milk. The Scala dei Turchi seems suspended between sky and sea. His name is linked to the legend that the place was the shelter of the Turkish ships. The stairway shape is due to the erosion process caused by water and wind. 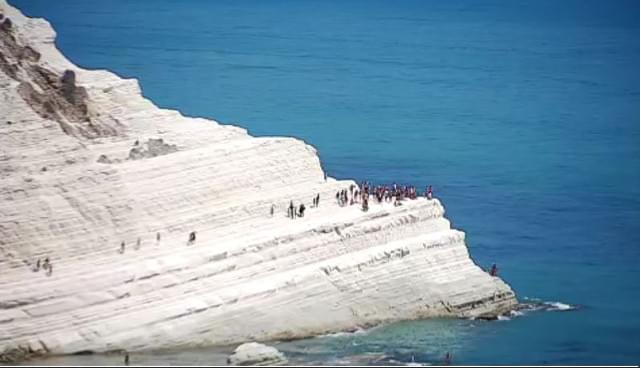 The Norman Castle of Erice

The Norman Castle of Erice is also called "of Venus", because its history has its center and origin in the deity associated with fertility. It is said that Erix is buried (hence the name Erice), son of an Argonaut and Aphrodite, killed in a boxing challenge by Hercules. According to Virgil, in these parts Enea, also the son of Aphrodite-Venus, buried his father Anchises. Here lived the priestesses who practiced the art of sacred prostitution with the pilgrims who went to the rocky peak to pay homage to the goddess. The remains of the structure visible today correspond to the fortress that the Normans erected in 1100. 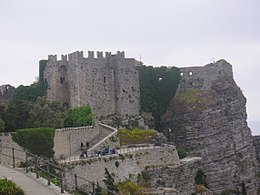 Red cove in Favignana is officially recognized as one of the most beautiful beaches in Italy. Every year it is the destination of thousands of tourists from all over the world, attracted by the splendid natural scenery, with the enchanting shades of the sea. The history of the name dates back to a legend of 241 BC. In that year its waters hosted a fierce battle between the Romans and the Carthaginians: it is the end of the first Punic War and the domination of Rome over Sicily is sanctioned. The clash caused the death of many men and it is said that their blood arrived in this cove on the island. Some scholars attribute the origin of the name to the typical rust red color of the limestone rocks that surround the bay. 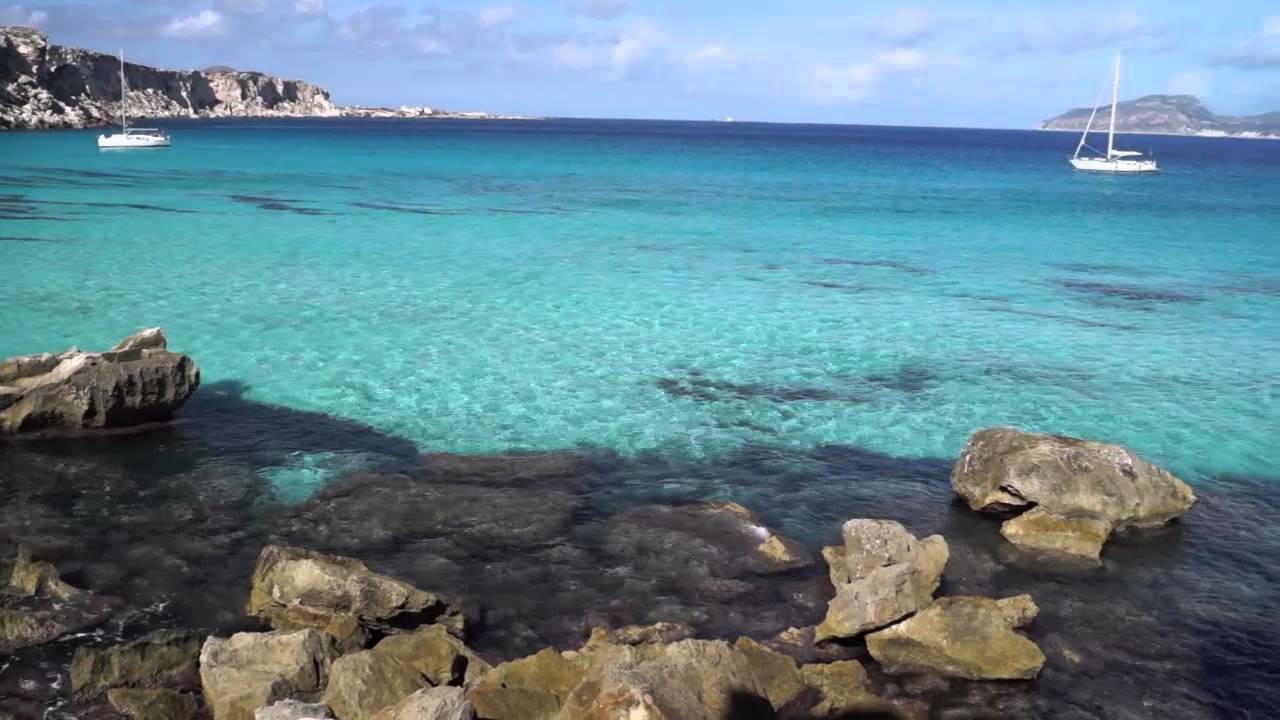 Restaurant La Madia really lives up to its name - madia meaning a big cupboard bursting with gastronomic treasures. Indeed, the restaurant has become one of the most precious culinary treasures of Sicily. He and hus wife deliver classic Sicilian dishes with their own unique, creative flair. In fact, creativity and simplicity are the mantra of Ristorante La Madia. Pizzaiola, ravioli of squid stuffed with tinniruma of cucuzza and anchovy sauce, Cuttlefish egg and Cassata ice cream are just some of the many highlights on the menu. A sense of nature is brought into the restaurant with large windows looking into a kitchen garden, and plenty of wood and stone used in fittings and features.

The restaurant became a point of reference in Palermo for the most demanding palates. The restaurant is appreciated both in Italy and abroad. It is thus able to create a new type of distinctly Mediterranean cuisine, where the flavours of the Sicilian raw materials are available in a more modern way. 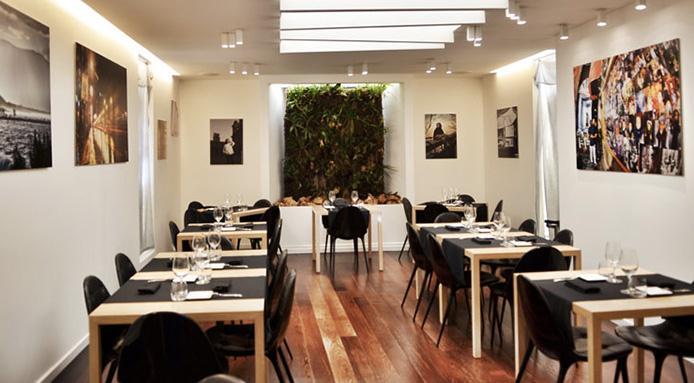 The restaurant is located in an ancient farmhouse renovated with wisdom while the wine cellar su troba in a natural cave. The chef proposes dishes such as puff of pink prawns with Mediterranean salad and almond sauce or beef tartar with the aroma of barbecues, lard of black Nebrodi pork. mustard ice cream and onion crunch. 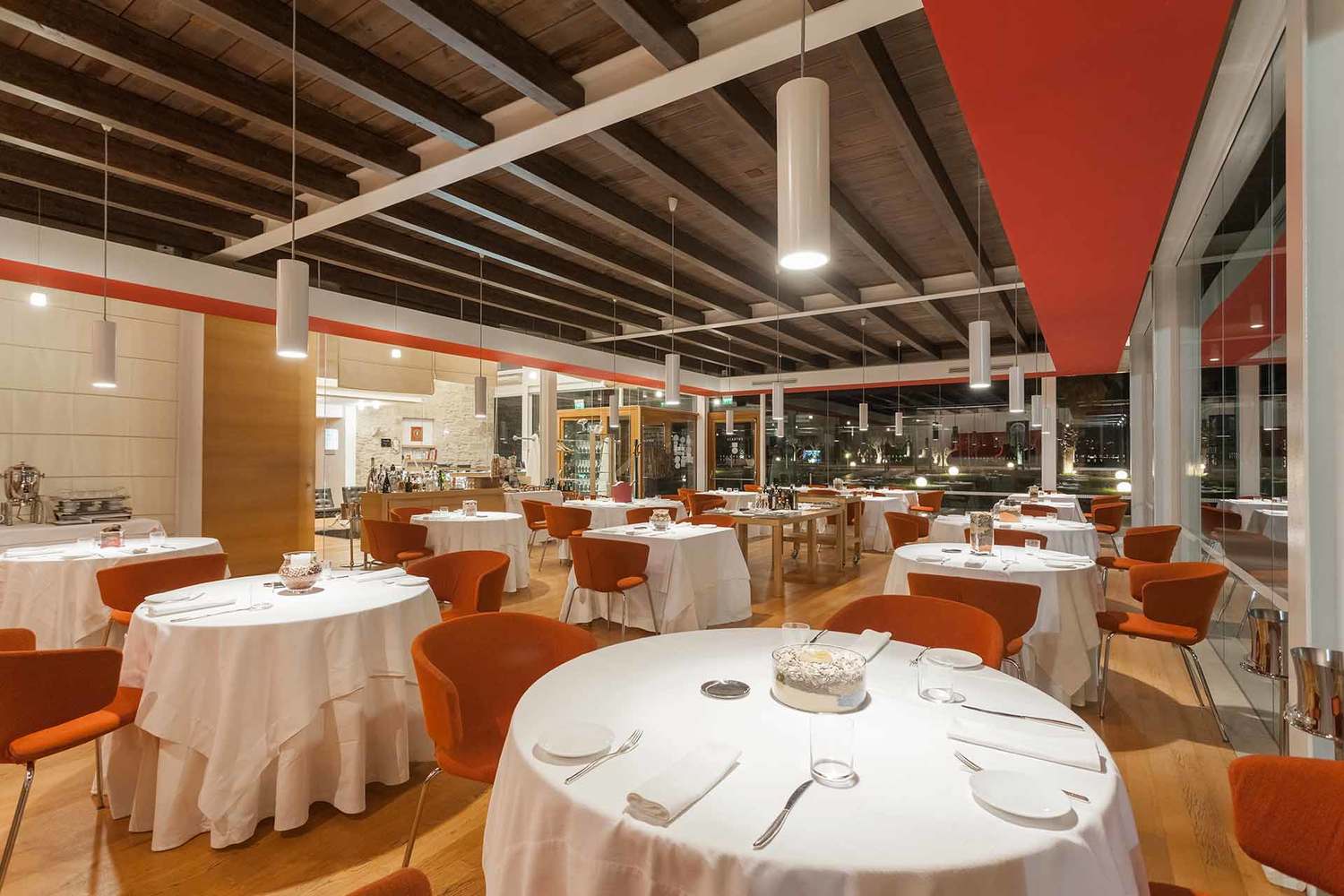 It is a traditional Sicilian cake made from sweetened sheep's milk ricotta, sponge cake, royal pasta and candied fruit. The origin of the combination of the cassata as an Easter cake was also due to an official document of the Sicilian bishops in 1575, which stated that the cassata is "indispensable during the holidays". 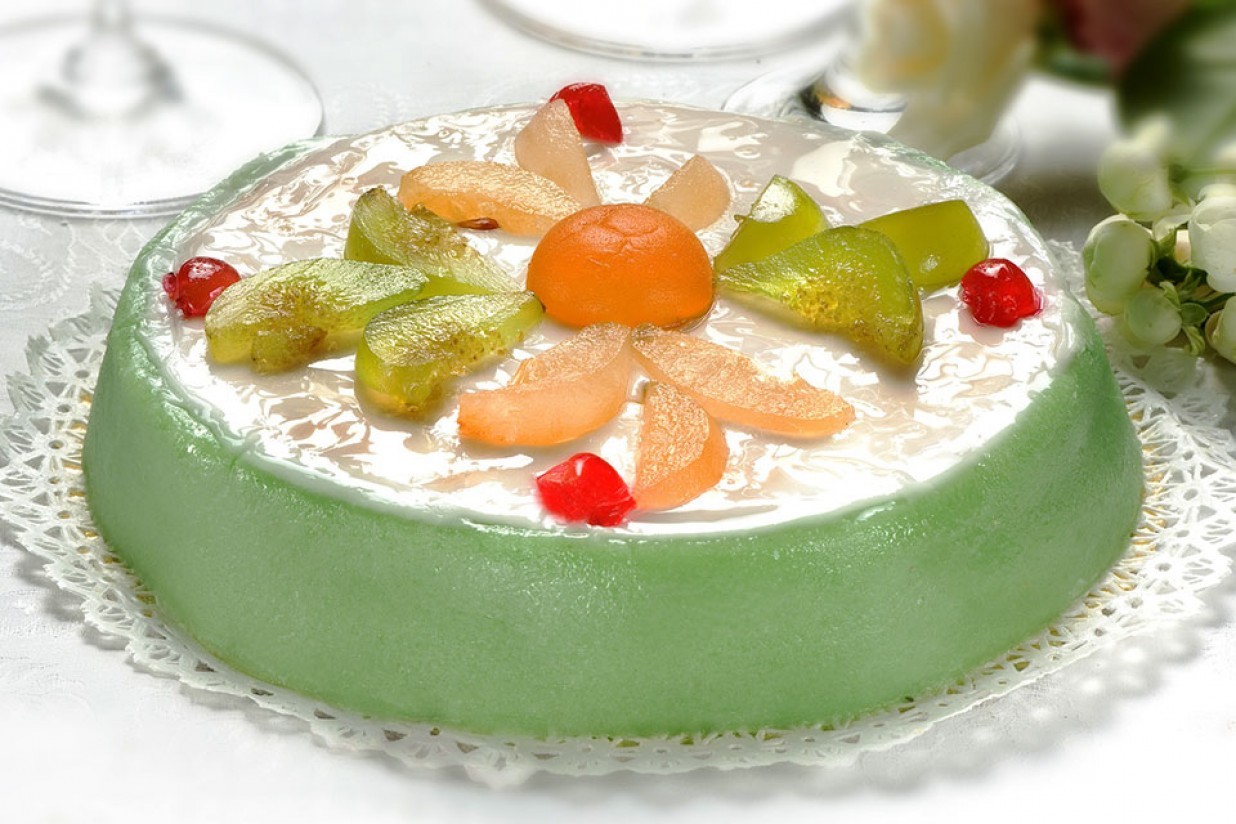 In Sicily the summer breakfast par excellence is granita and brioche. The brioche is served hot along with the granita, in which it can be soaked. 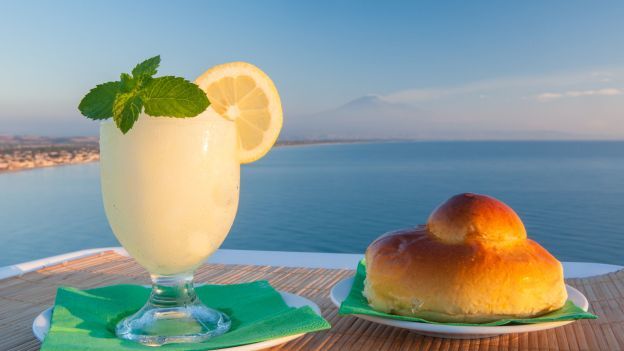 Arancino is a specialty of Sicilian cuisine. It is a cone of breaded and fried rice, stuffed with ragù, peas and caciocavallo, or diced cooked ham and mozzarella. The name derives from the original shape and the typical golden color, which remind of an orange, but often have a conical shape. 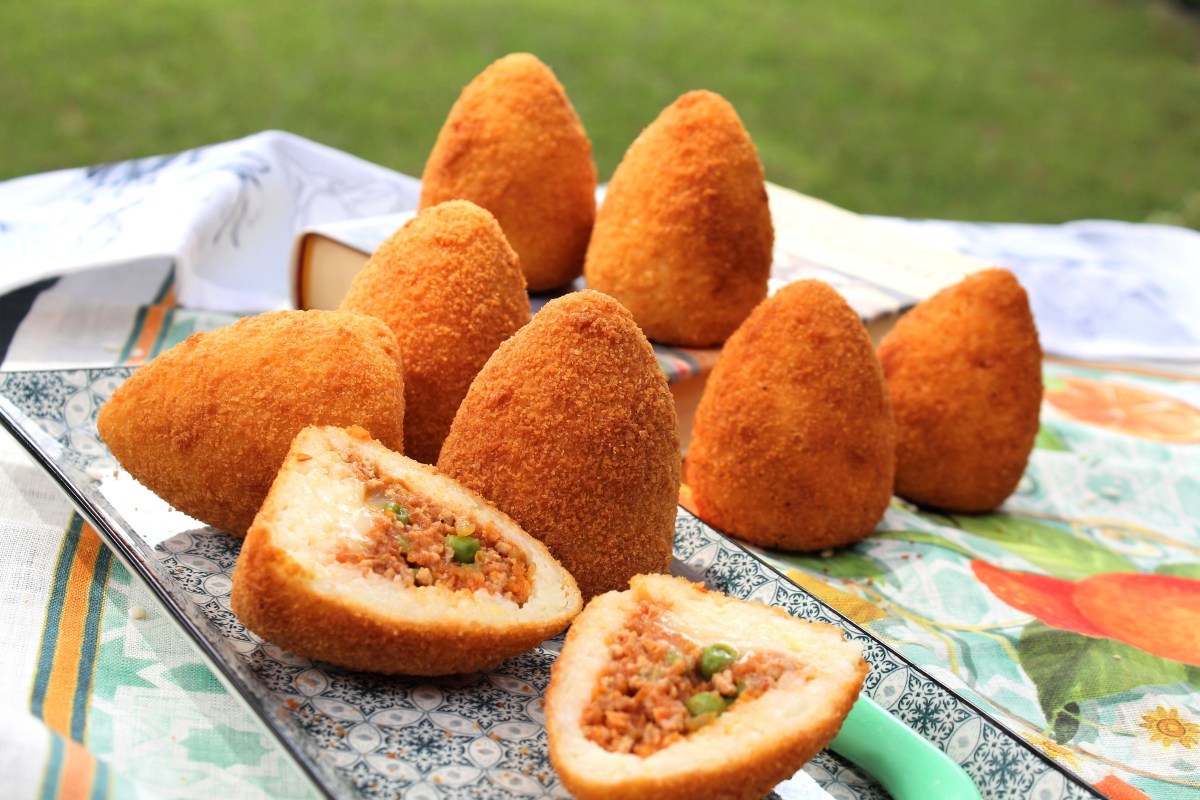 Sicilian cannolo is one of the best known specialties of Italian pastry. Originally they were prepared on the occasion of the carnival but over time they faded this tradition and now they are prepared when you want. It is said that they were the Harem women first the inventors of the recipe. According to the tradition handed down to us, the Saracen emirs kept their harems here and so the concubines created it first, perhaps as a phallic homage to their men. So according to tradition it was precisely that of the Sicilian cannolo one of the recipes handed down by Muslim women to Christian sisters, since women at home spent their time preparing desserts. 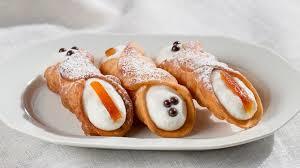