What to do in Aquila?

It is one of the most important cities in Central Italy. Famous university center, rich in history and natural beauty. The earthquake almost destroyed it, but the city did not give up and day after day it still tries to return to its former glory.

It was built in the second half of the 13th century, although it has been remodeled for centuries with restorations, modifications and decorations. The Basilica was founded by San Pietro Celestino. 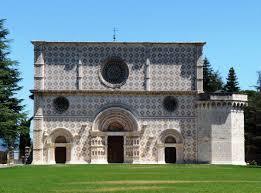 The Fountain of 99 spouts

The fountain is made up of ninety-three stone masks and six single spouts, from which water flows. According to tradition, the spouts represent the ninety-nine castles that participated in the foundation of the Eagle. The city would in fact consist of ninety-nine squares, ninety-nine churches and ninety-nine fountains, each referring to the castle of reference. 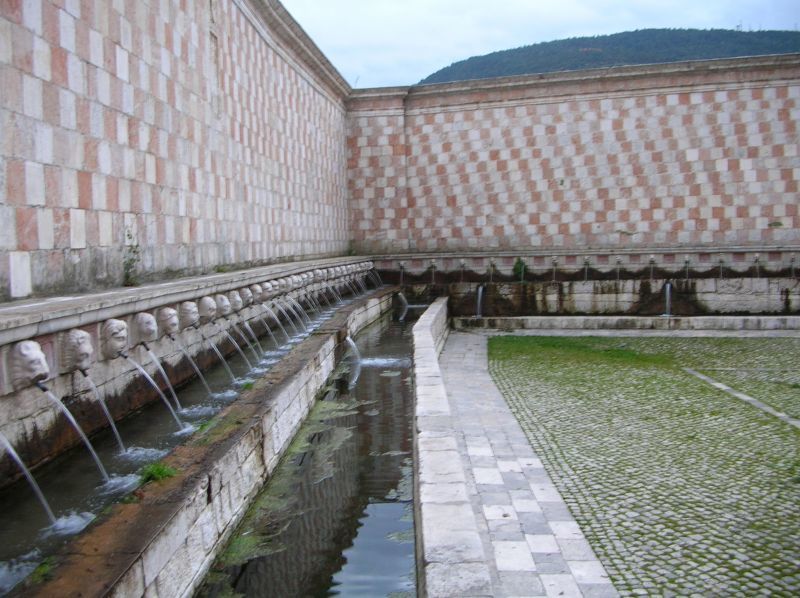 It was built, with the adjacent convent, between 1454 and 1472 in honor of Saint Bernardino of Siena, whose remains are kept inside the mausoleum. The interior is in Baroque style. Bernardino da Siena, who according to legend reunited the two factions that faced each other, was destroyed by the earthquake and then rebuilt in Baroque style. 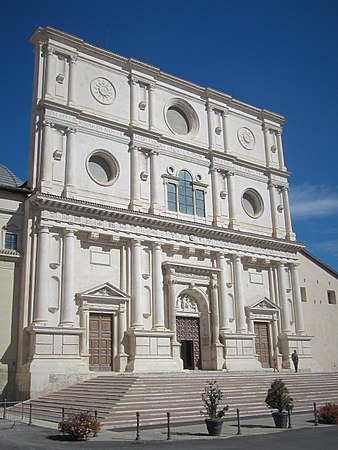 It is a fortress built during a grandiose project of military strengthening of the territory that took place during the Spanish domination in Italy. It was used in the seventeenth century as the residence of the Spanish governor and later as accommodation for French soldiers in the nineteenth and German during the last world war. Inside there is also an Auditorium and a Conference Room. 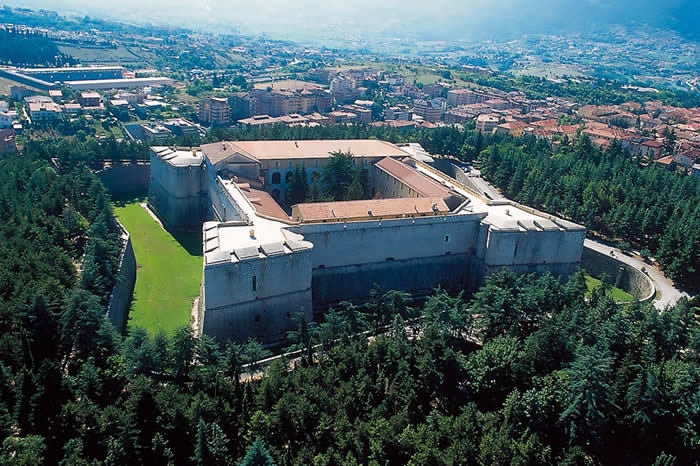 It is characterized by two female nudes in bronze and support the Abruzzo basin. Perhaps not of particular historical importance, but it is very appreciated for the panorama that can be enjoyed from here, towards Gran Sasso. It takes its name from the evocative play of light on the water that comes alive at night. 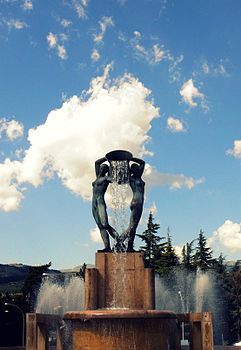 It is a spectacular karst phenomenon characterized by the presence of an underground stream, the stream re-emerges inside the cavity originating suggestive rapids and waterfalls, whose power varies with the seasons. The walls have the typical white of calcareous rocks with two dark bands. Suggestivee are the Sala del Silenzio, in the section where the stream is dried up; the Waterfall Room in which the water falls with a leap, and the Black Lake deep in the oldest part of the Caves which conceals fossil remains of bats. 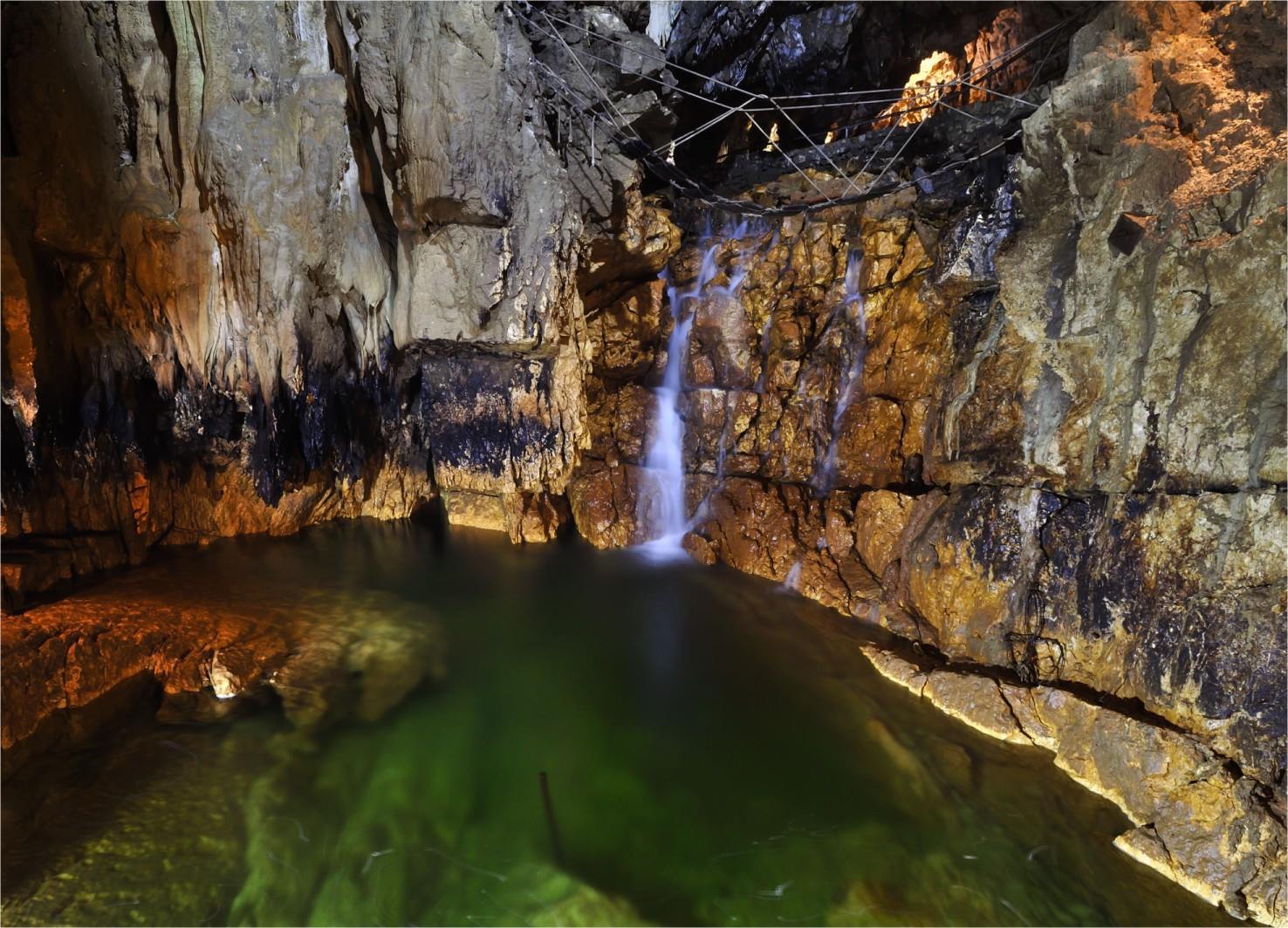 It's a small lake. Destination for holidaymakers in L'Aquila and tourists at weekends thanks to the pleasant environment surrounded by grassy banks, woods and willows. The lake also offers the possibility of fishing for trout, pike, carp and chub. 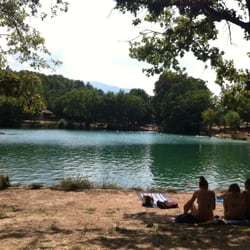 The exhibition occupies five rooms on the ground floor and illustrates the art of Abruzzo with an effective and elegant preparation. One of the most suggestive sections is the one dedicated to the wooden statues and to the painted plates of the Madonnas of Abruzzo. Among the most important artists of medieval art are Francesco da Montereale and Saturnino Gatti. The exhibition is completed by the naturalist paintings by Giacinto Brandi, and by the Flemish artists of that time.