Rome is the city of love and antiquity. By coming here you will be able to taste an amazing Italian cuisine, to taste Italian wines, to drink a cup of coffee admiring the cradle of ancient culture and to watch a sunset while listening to the Italian music.

Different generations, travellers of various hobbies and budgets, they all claim the same - the experiences in Rome are endless, inviting to come back here and to discover it over again.

How to reach Rome

The prices of plane tickets are constantly changing. You might find some direct flights to Rome from your country, in another case, you will have to look for connecting flights or fly to bigger airports nearby. Azair.com is a good website to look for plane tickets.

A train will take you from Fiumicino airport to Termini station in Rome in quite short time. This is the best way to reach Rome.

Places to live in Rome

There are thousands of hotels offered in the web pages for lodging reservations, thus you will easily find a place to stay, especially in off-season time. Maps will also help to find a hotel in a convenient location, that are provided at booking.com and airbnb.com. If you register to these websites you will be provided more offers and some additional discounts if you will travel more often.

By pressing this active website link and entering the dates of your stay you will get a list of hotels in Rome, then you can open the map and see the locations of the hotels offered. Airbnb.com also has many great options to stay, especially if you are looking for apartments with kitchen.

Termini station district is popular among tourists which is clean and safe, and from here you can easily reach tourist attractions on foot.

Another district is Trastevere. Here you can find a hotel in a former convent building Donna Camilla Savelli. The prices in this hotel change with the size of the room. Off-season small room here costs around 140 Eur, two-room superior room - around 260 Eur. Tourists also recomend another hotel nearby - Domus Corsini, where you cand stay for a lower price.

If Rome is just a stop on your way to Tuscany or Naples, Termini district would be a better choice. No need to waste your money for luxurious hotels. Here you can find cheaper hotels just to spend the night at. One of such hotels is Hotel Termini, quite ordinary but clean.

If you decide to rent apartment at Airbnb.com, you can find there various apartments for a small price. By clicking this website link you can get a 35 Eur discount if you will register at this site. At Termini we recommend you to visit a fish market nearby and buy some wonderful sea food.

The tourist attractions in the city centre are well-located. A public transport is well-organized, especially the metro. The city buses are also a good choice for a sightseeing tour though we do not recommend it during the peak hours. Roma Pass is the cheapest option to travel with public transport. However, we recommend travelling on foot.

The trip to Rome

If you fly to Fiumicino airport, from there you can travel by train that you will reach through the underground passage. 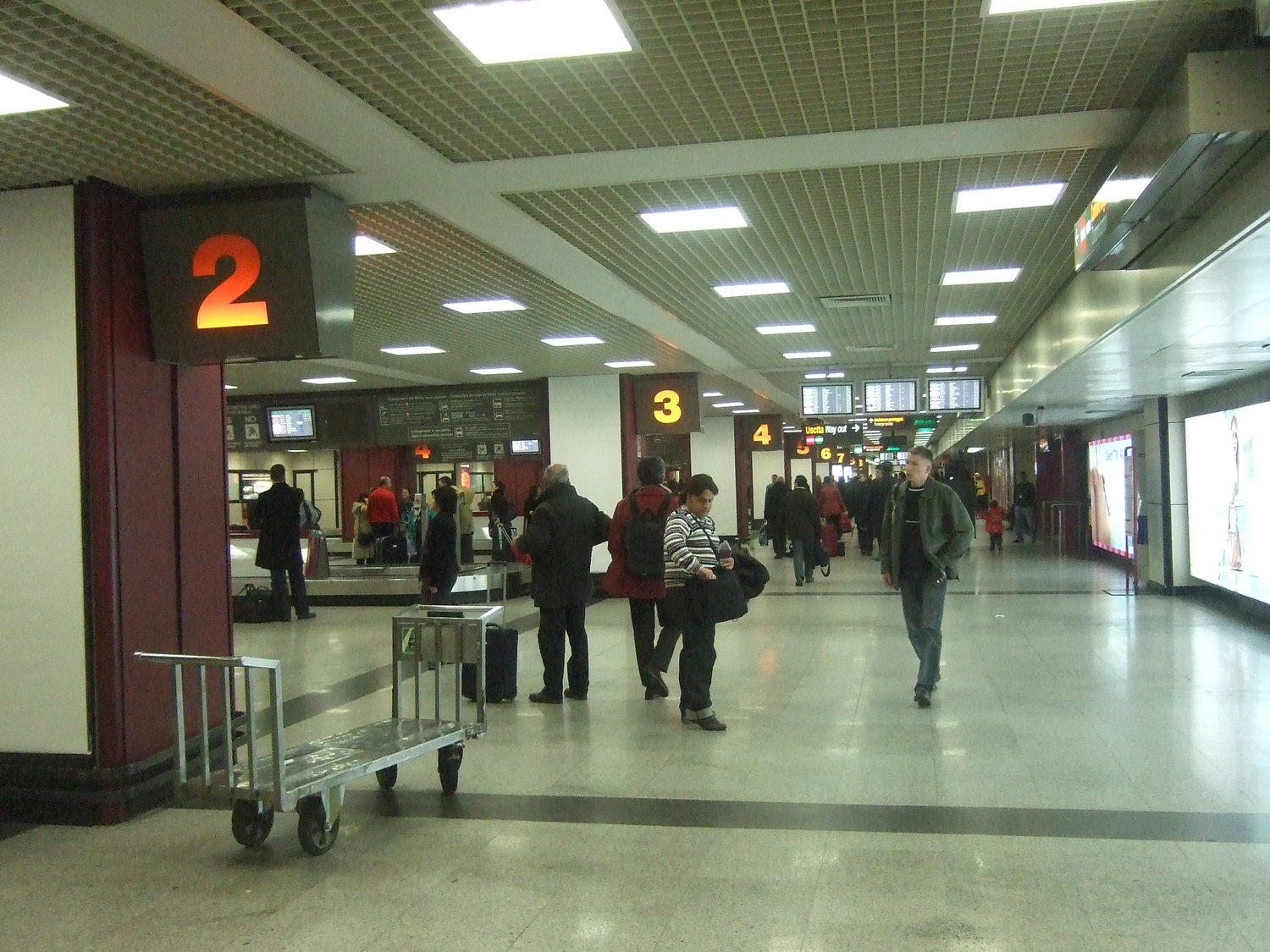 At the train station you can buy Roma Pass if you want to save money while using the public transport and visiting museums. The fast train to Rome costs 11 Eur and in 30 minutes it reaches Termini station. From there you will easily reach any part of the city. Around the station there are many hotels for various prices. 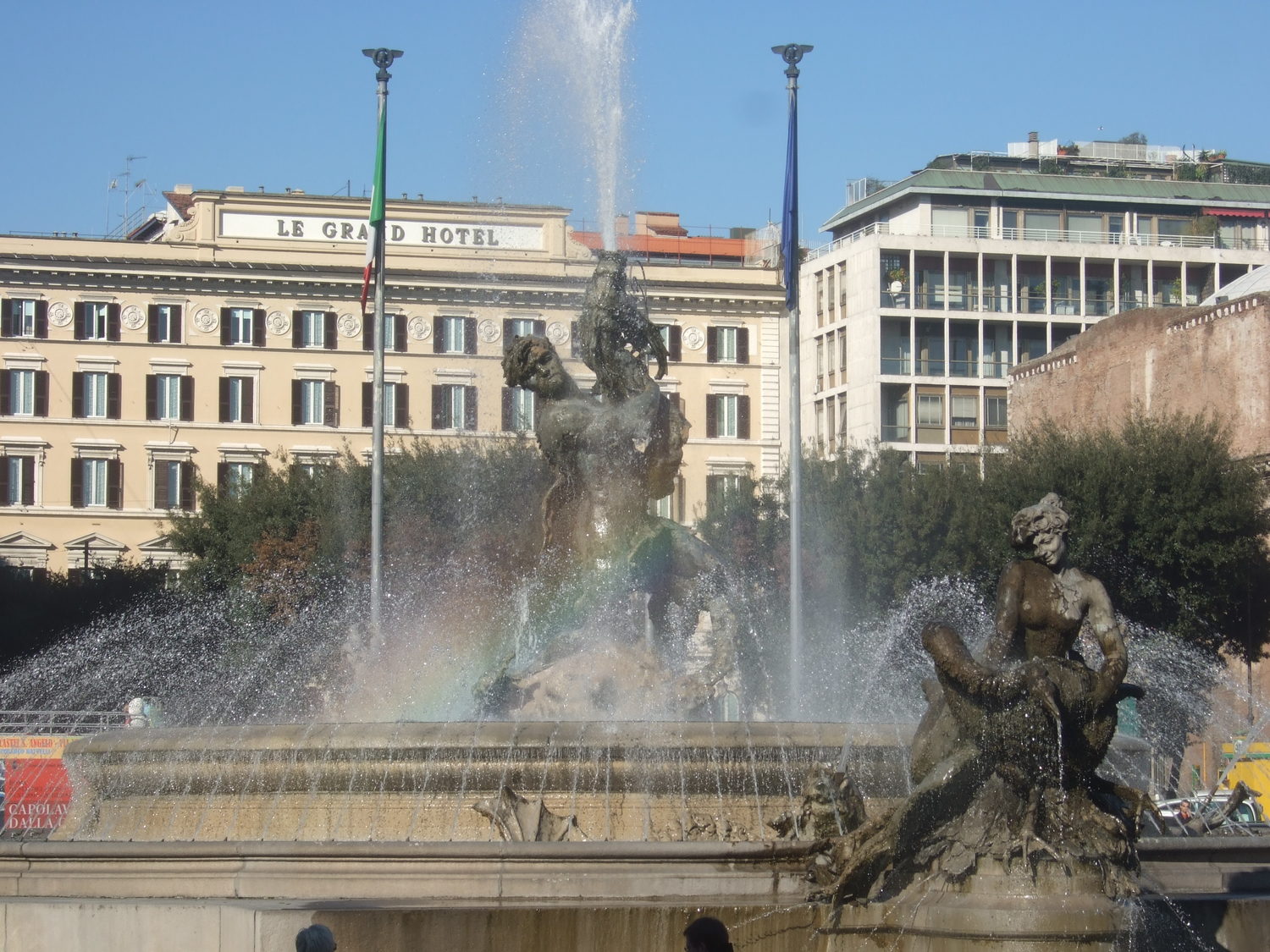 Near the station there is Piazza della Repubblica with the Fountain of the Naiads. 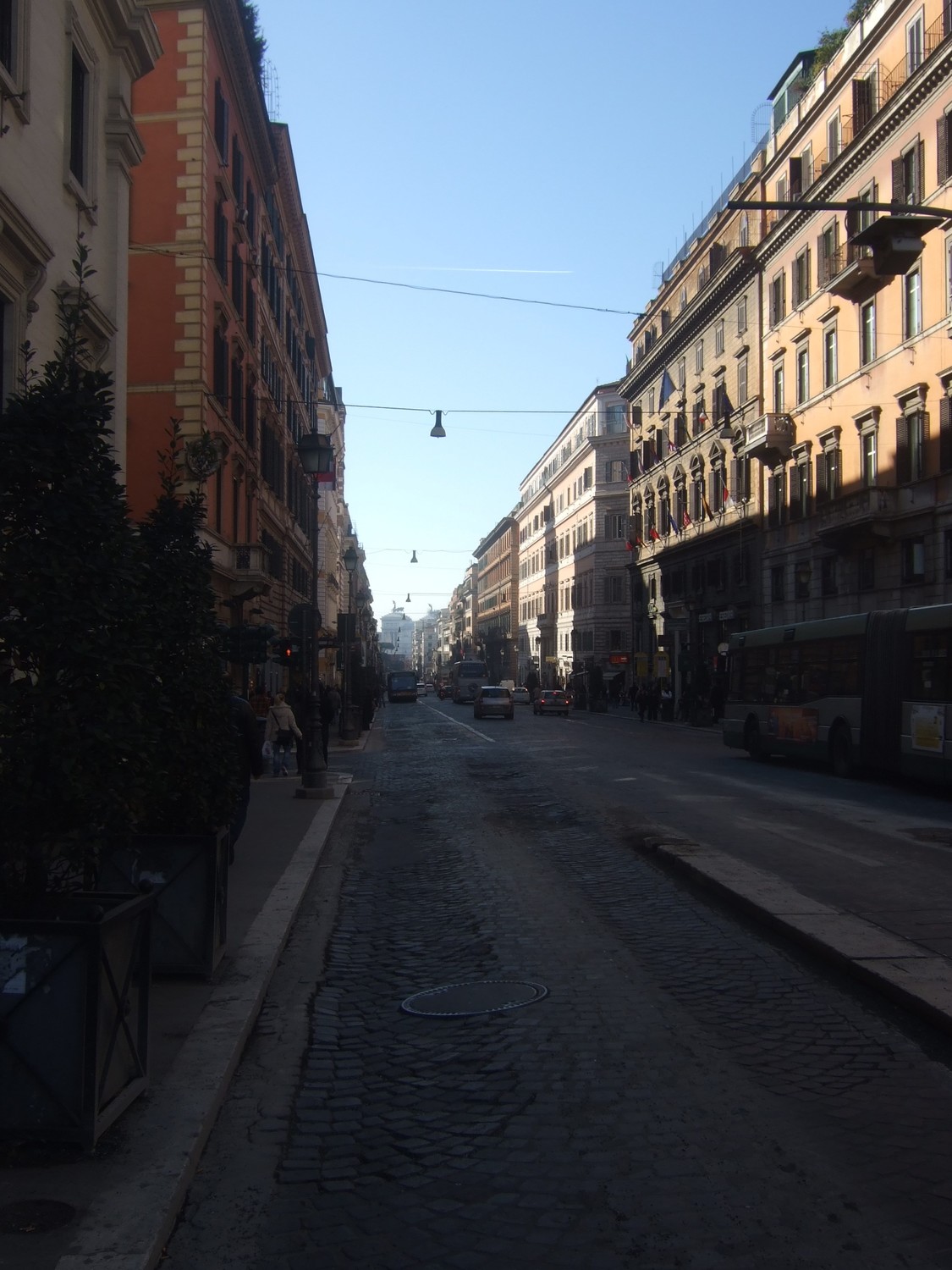 From here goes the street Via Nazionale allowing you to reach many famous places on foot.

First thing to do after checking in the hotel is getting "attached" to the city. You can visit the biggest and most known objects by double-decker bus. We start at Termini station which is standing in the place of the Ancient Rome terms. Near the station there is National Roman Museum, Baths of Diocletian. From the station we go to the Piazza della Repubblica with the Fountain of the Naiads, in front of which there is Rome Opera House and The Basilica of St. Mary of the Angels and the Martyrs, which was built inside the ruined frigidarium of the Roman Baths of Diocletian. After these objects you can visit the Quirinal Palace, one of the three current official residences of the President of the Italian Republic. At the palace you will find the statues of the twins Castor and Pollux, the heroes that the Romans believed were helping them on the battlefield. In one of the legends it is said that they helped to win the battle, came back to the city with good news, gave a drink to their horses and mystically disappeared. Standing in the piazza of the Quirinal Palace you can admire a panoramic view to the Rome and from there reach the Trevi fountain in just a few minutes. 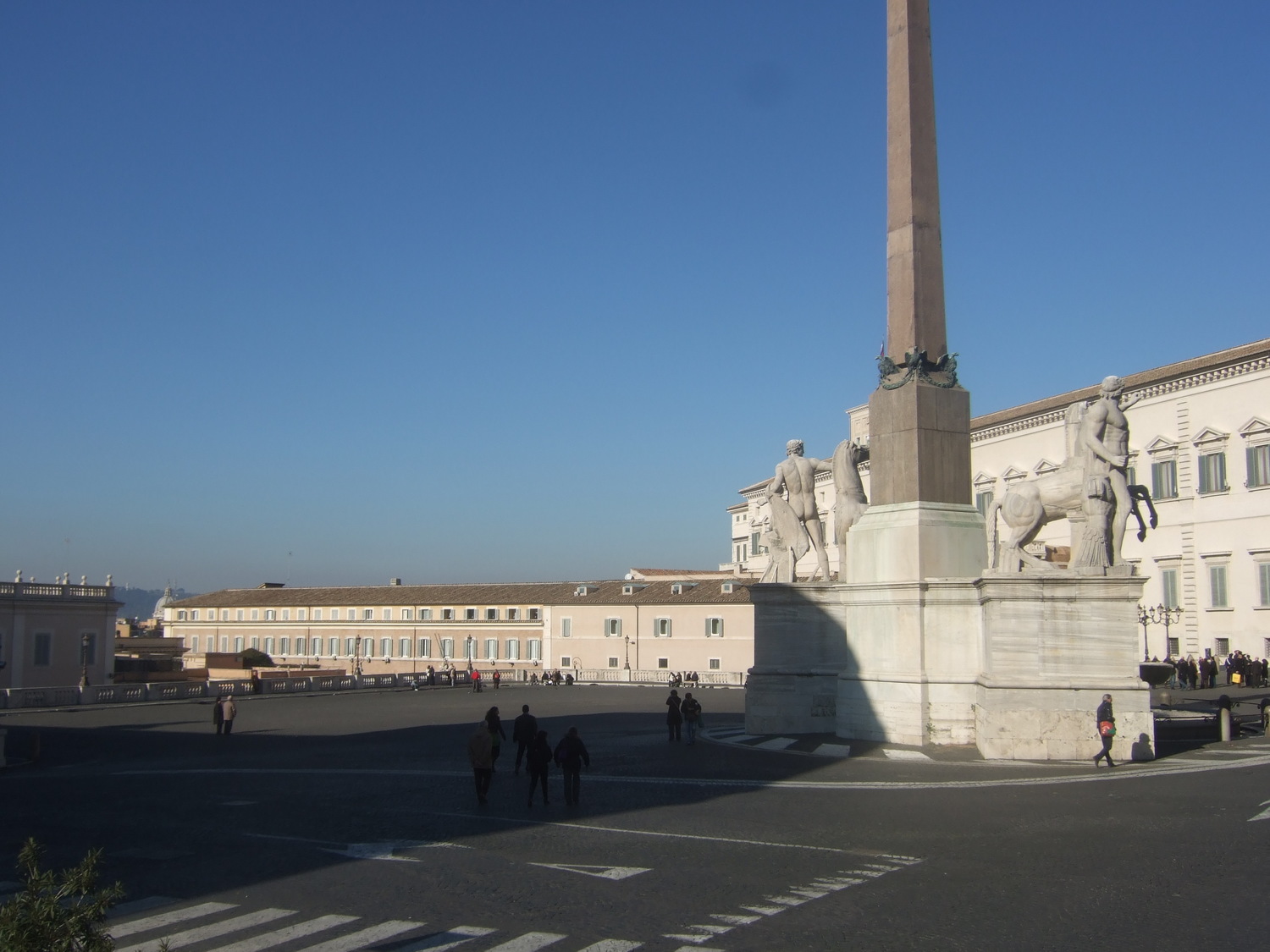 Castor and Pollux at the Quirinal Palace.

Next stop is Piazza Venezia - at the pompous palace standing there, also called organ by Romans, Benito Mussolini was giving speeches once. From there - Capitoline Hill - Cordonata Capitolina, also called Michelangelo stairs, leads up the hill. Once a destination of Roman heroes during the triumphal procession, today Capitolium is the residence of the mayor and Rome's municipality. The Capitoline Museum is rich with antiquity marble sculpture: dying Gaul, Cupid and Psyche, Satire, Capitoline Venus, a girl with a dove. 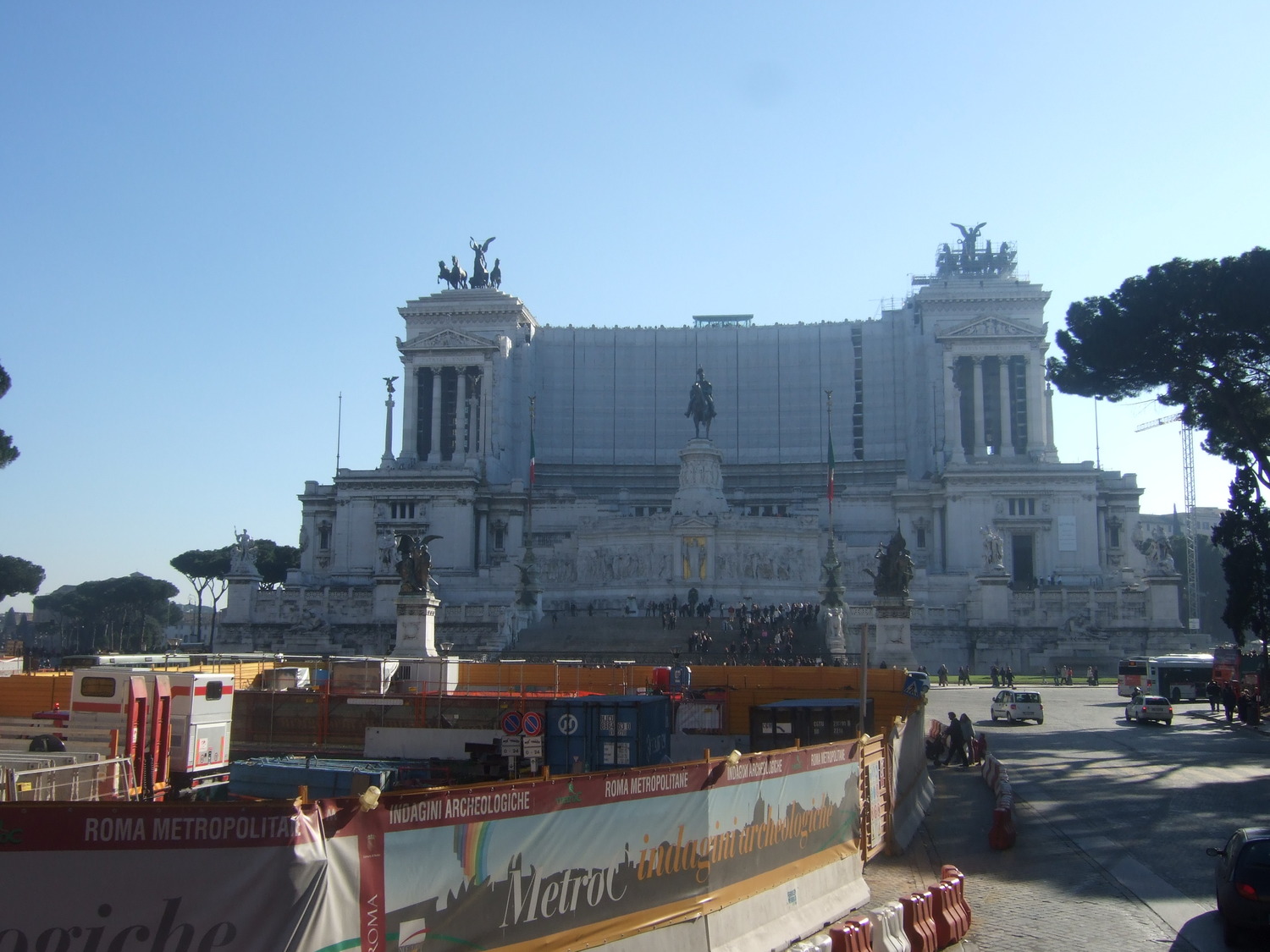 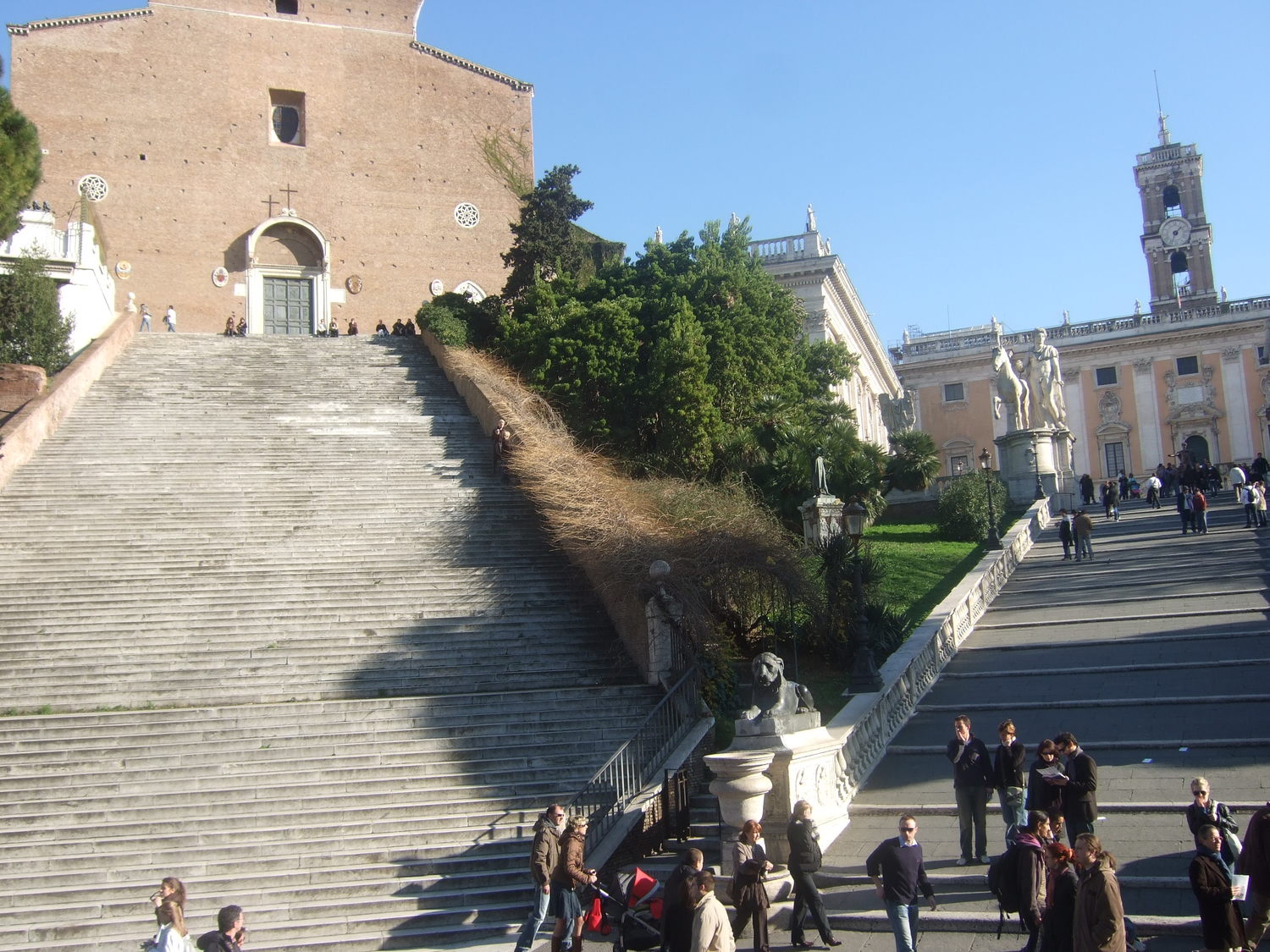 From the Victor Emmanuel II National Monument, you can continue to the Palatine Hill with the Palace of Tiberius and the Domus Augustana. 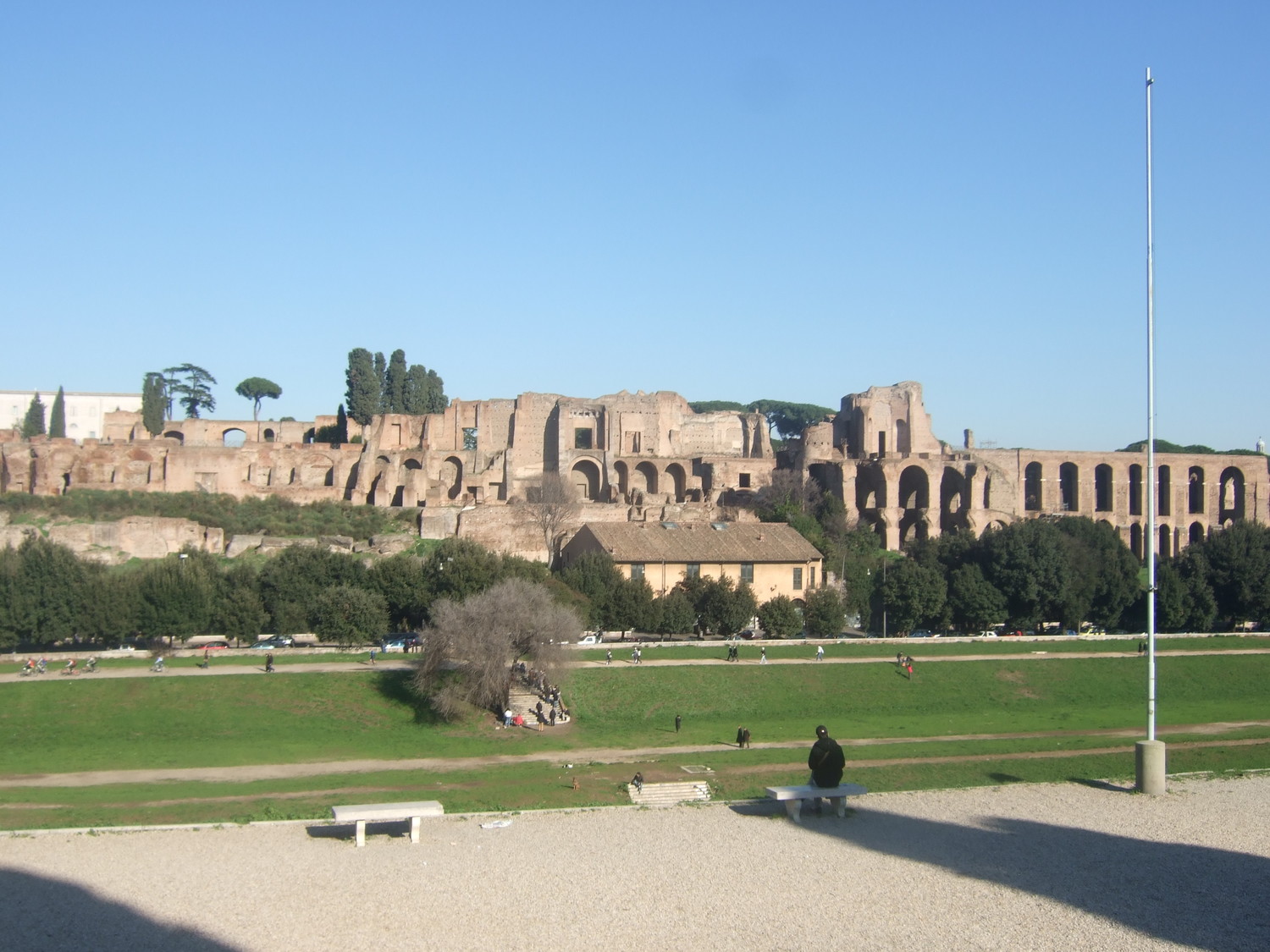 Palatine Hill with the Palace of Tiberius and the Domus Augustana

After visiting the Palatine Hill, you can cross the Ponte Vittorio Emanuele II across the Tiber. There, on your right, you will see the Mausoleum of Hadrian (Castel Sant'Angelo) which was considered to be one of the greatest Roman architectural masterpiece after the Colosseum. At the Mausoleum were buried Roman emperors and their families, later it was used as a fortress and prison, where the well-known count Alessandro di Cagliostro. It is named Castel Sant'Angelo honouring the Michael the Archangel who, as the legend tells, came from the sky, took the sword as a sign of God's grace ending the plague will be over. 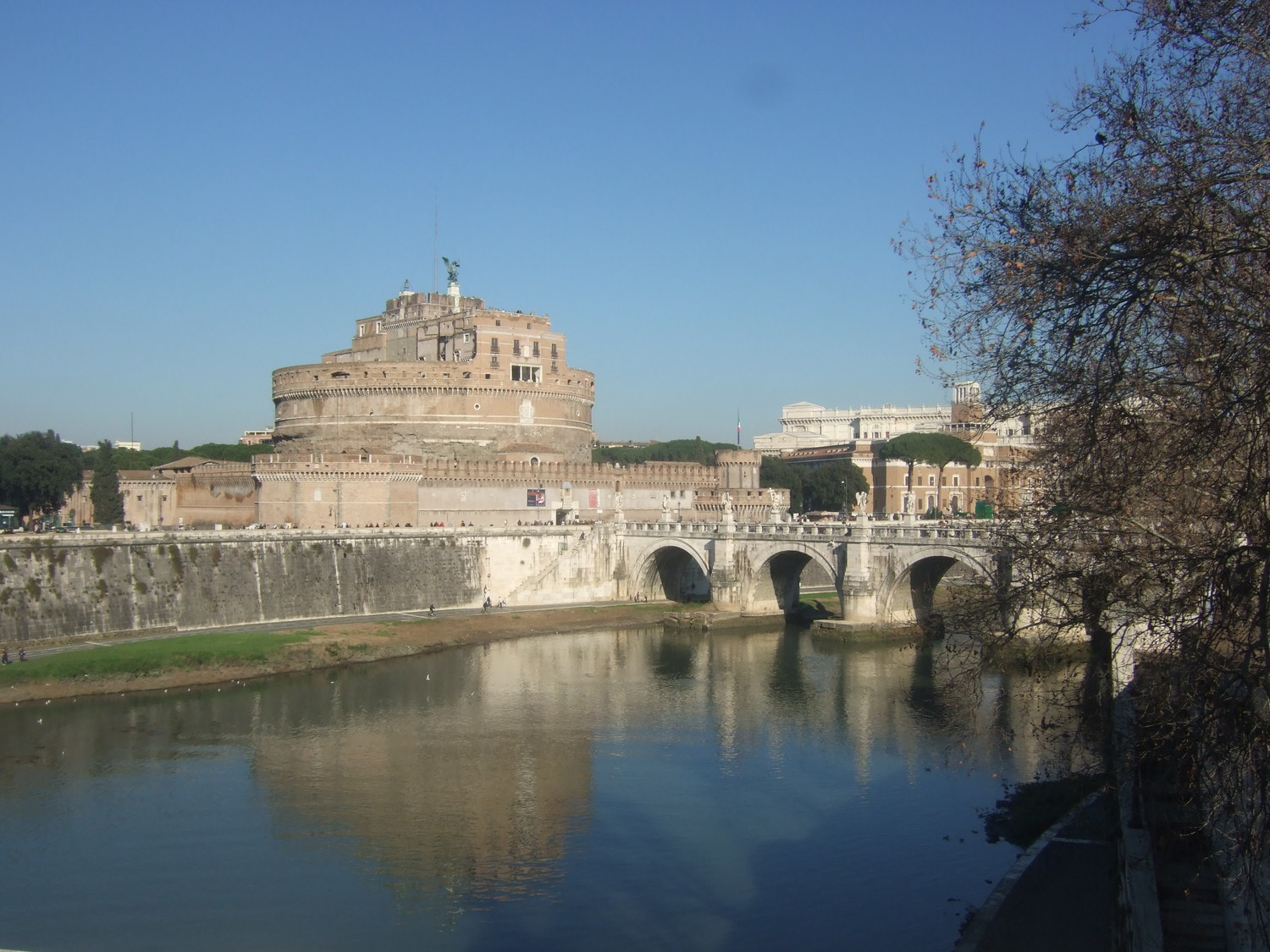 You can continue your trip past the St. Peter's Basilica. The iconic dome dominates the skyline of Rome. Then we go further past the Supreme Court of Cassation, Piazza del Popolo and the end your tour is at Trevi Fountain. 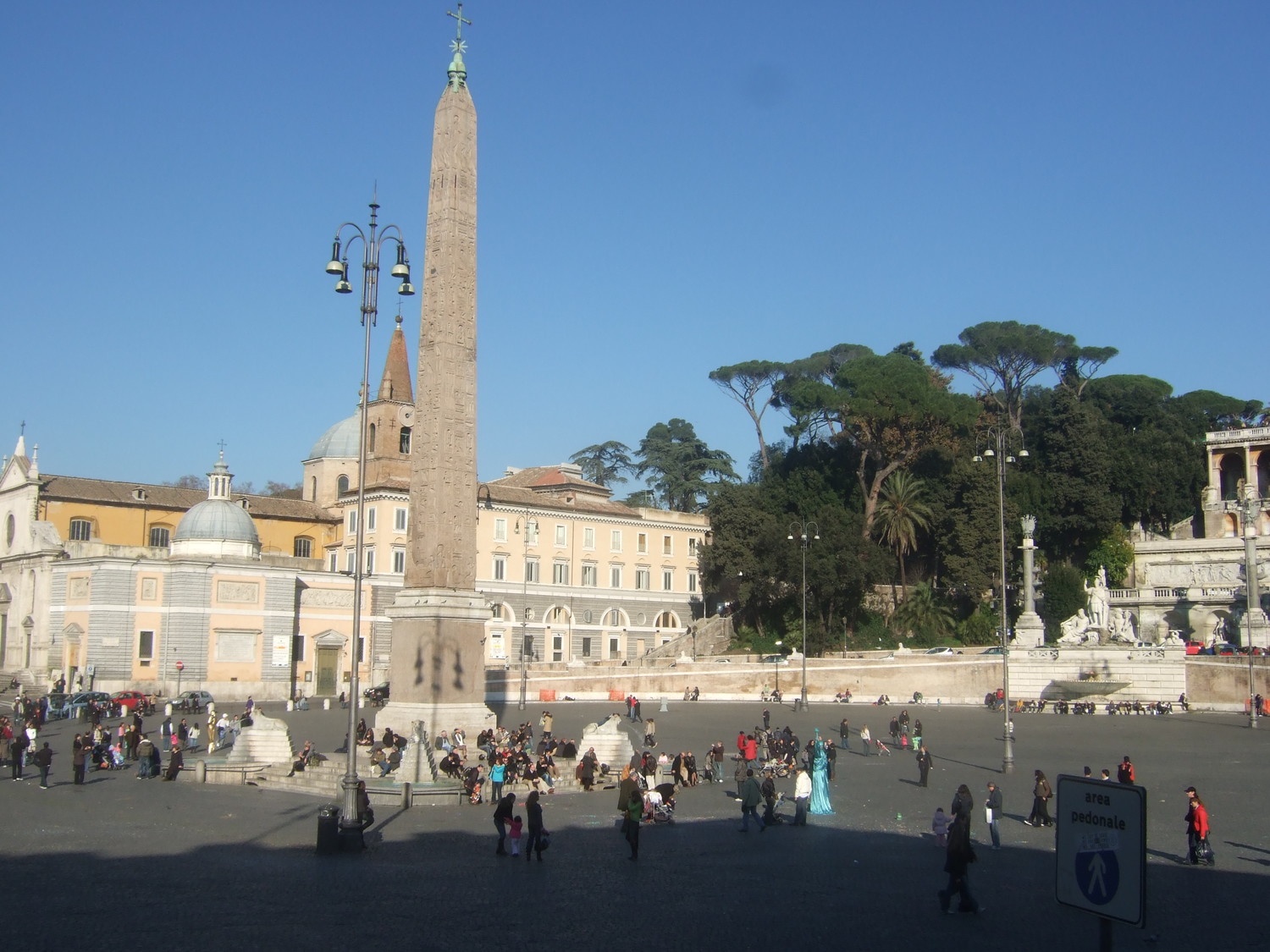 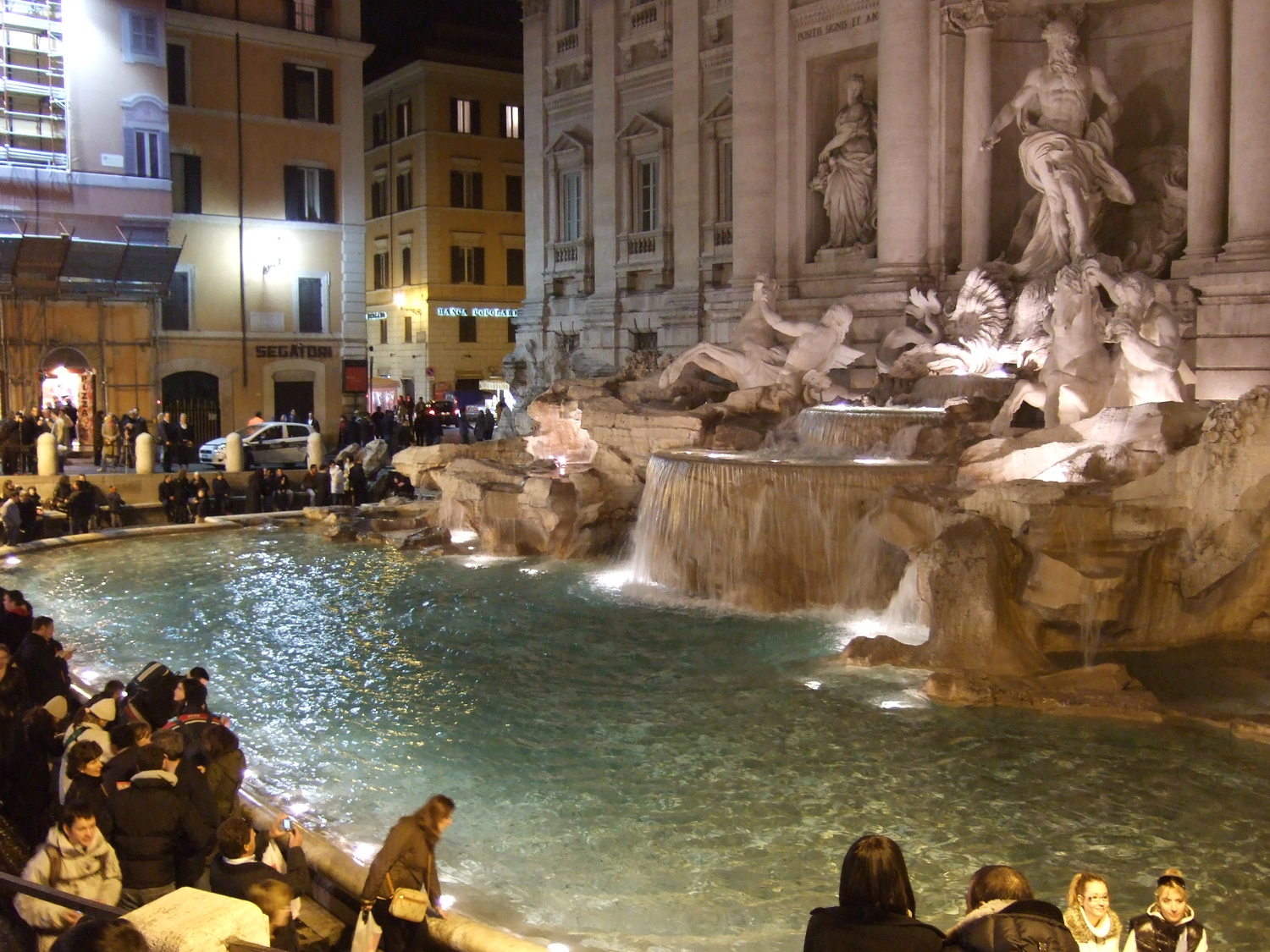 Rome is not crowded with tourists off the season, so all tourist attractions are easily accessible. Cafes and restaurants are half-empty, lines to museums are way shorter. Weather is perfect for discovering the city - sun is shining, nature is green, trees full of oranges and mandarins. Shop sales are also common, reaching 50% almost at every shop. However, many cafes and restaurants work shorter hours, thus, to find a place to eat at 4 pm is quite a challenge.

It feels like all the tourists go out at night because Rome is worth a separate tour during the night time. Pantheon is a must-see object exceeding even the St. Peter's Basilica. Such personalities like Raphael and Vittorio Emanuele II are buried there. The building was constructed 27 years BC with the Latin inscription on the front of the temple still counting the years. The height to the oculus and the diameter of the interior circle are 43 meters. Another object - Trevi fountain - is more crowded. There you will find many open cafes, clothes shops. 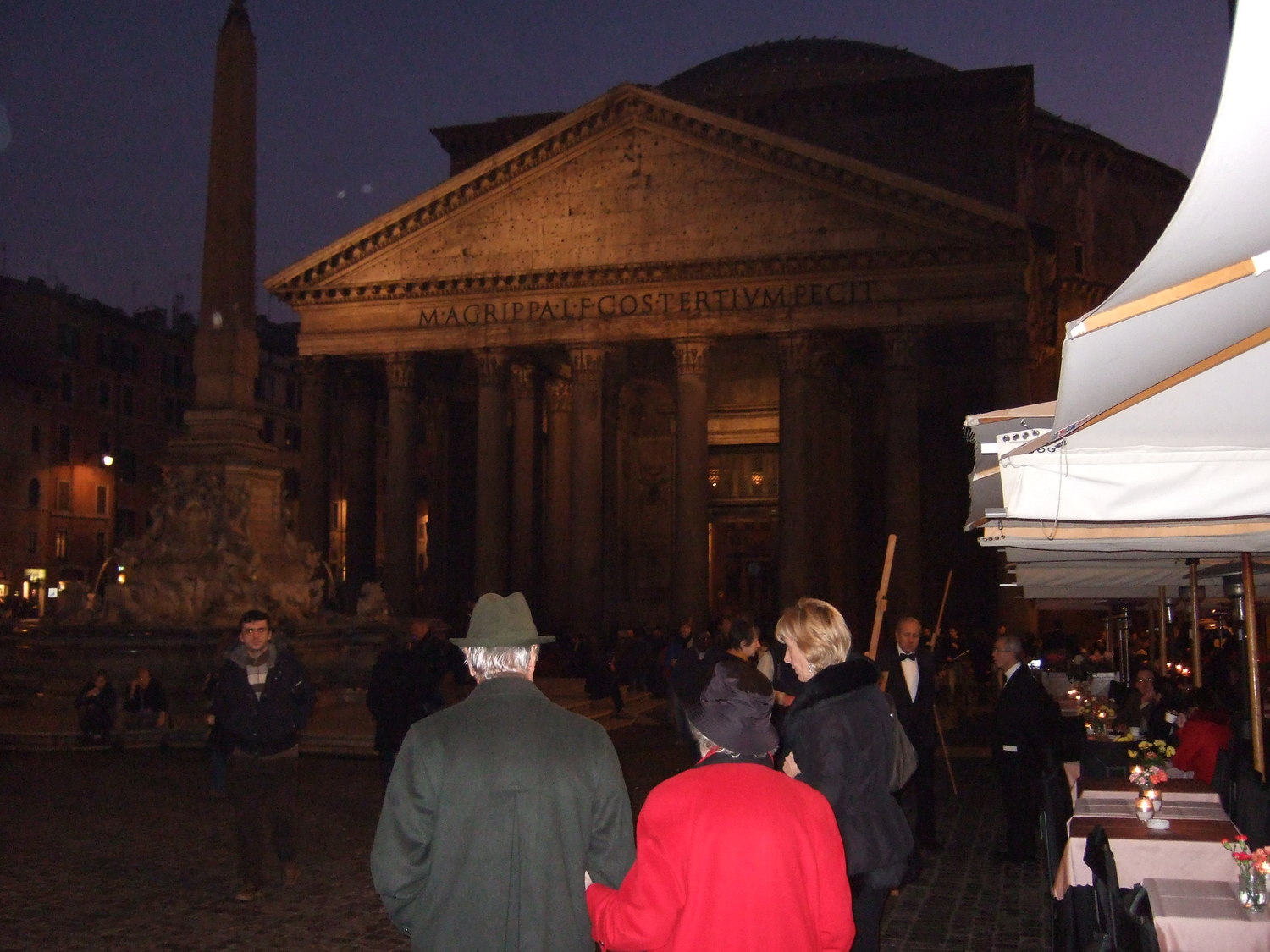 If you have more time or several evenings at Rome, next object could be The Pincio Gardens where you will find a small terrace just above the Piazza del Popolo with the view to Rome. After admiring the view you can continue visiting the Trevi fountain again where the night life is at its peak. 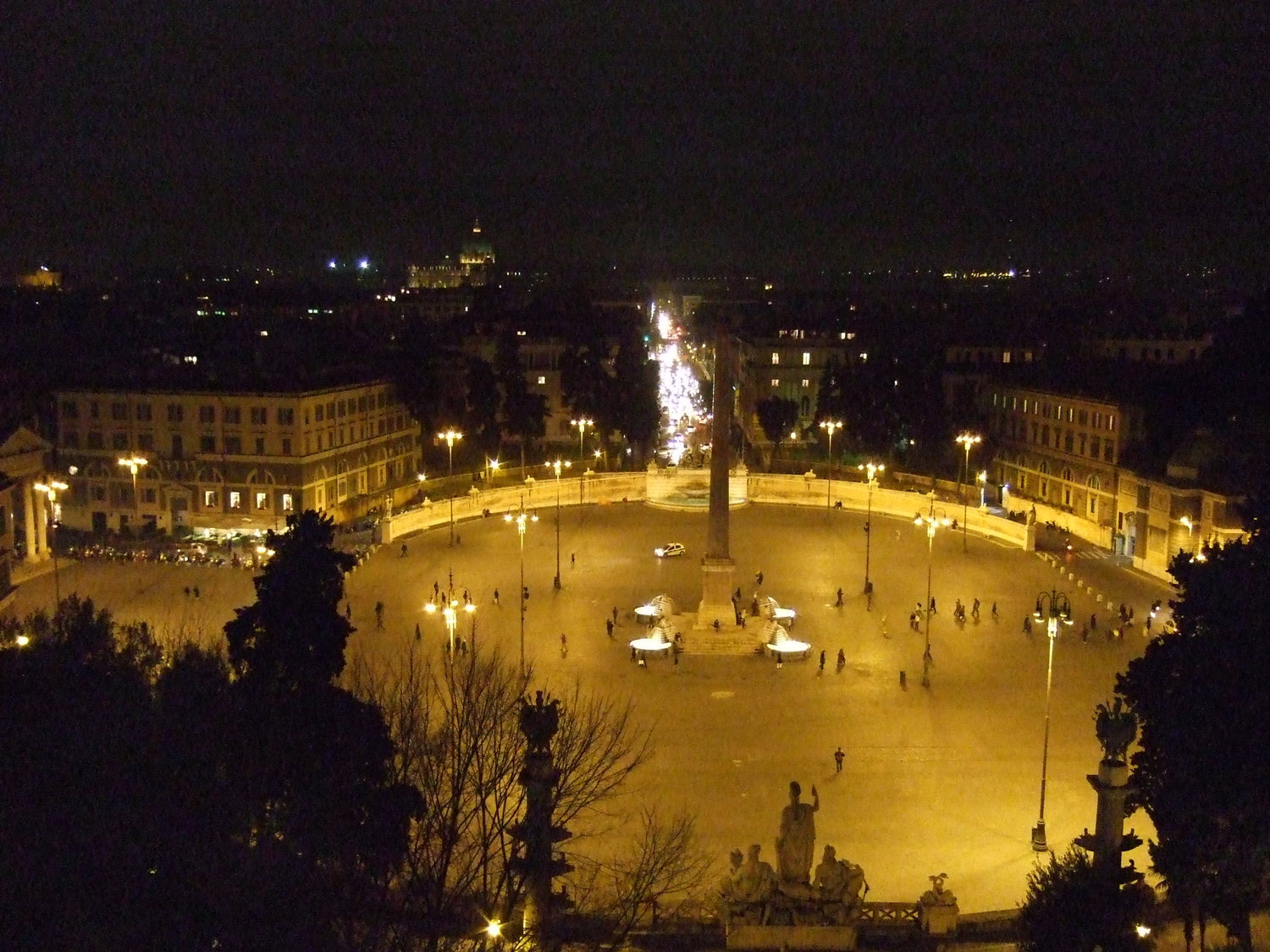 There is a saying "Rome will exist as long as the Coliseum does; when the Coliseum falls, so will Rome; when Rome falls, so will the world," thus, Coliseum is considered to be the symbol of Rome. It is also known as the Flavian Amphitheatre, but it is named Coliseum, probably because of the Colossus of Nero standing nearby.

There is a long line to enter the Coliseum, even during the winter. It costs 11 Eur, but if you have Rome Pass, you don't have to pay extra and can skip the line. The second level view is the most impressive. 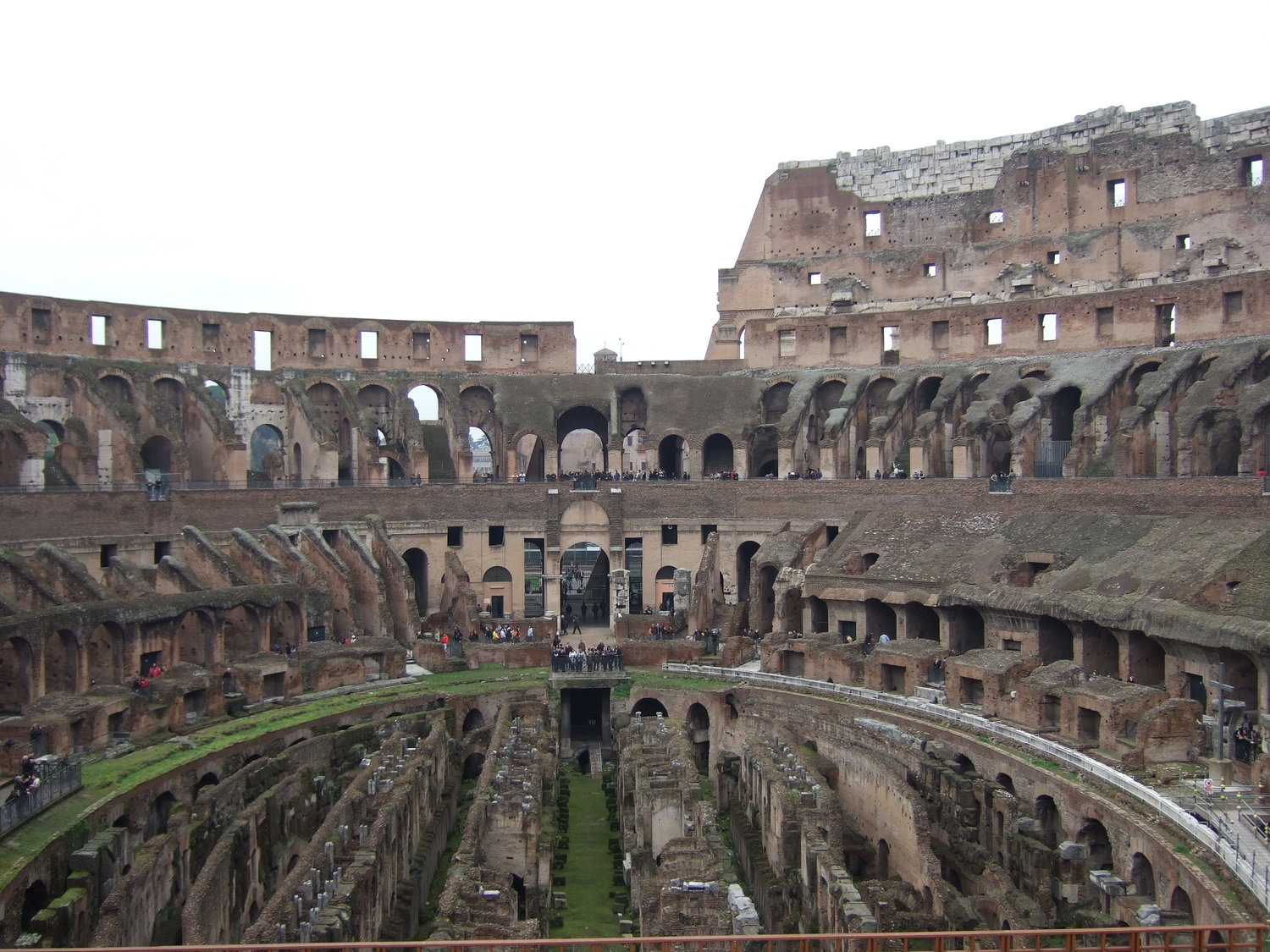 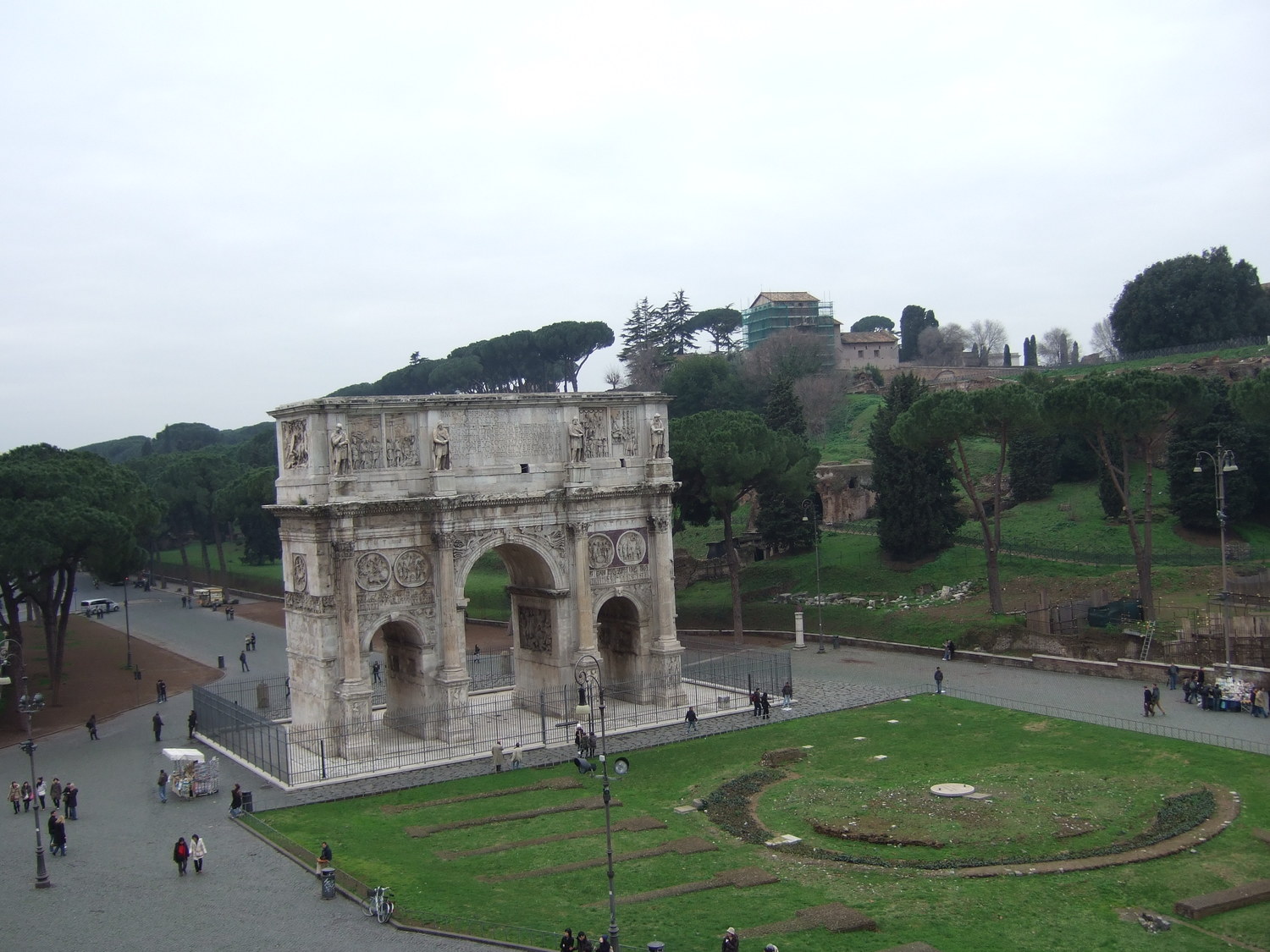 The Arch of Constantine and the view to the Palatine Hill

The legend tells that Rome was born here, where Romulus mentioned its name for the first time. The Hill was home for Kings, Caesar and Emperors. Even today, walking the ruins of the palaces leaves its mark with wonderful sceneries of Coliseum, Rome and the whole Roman Forum. 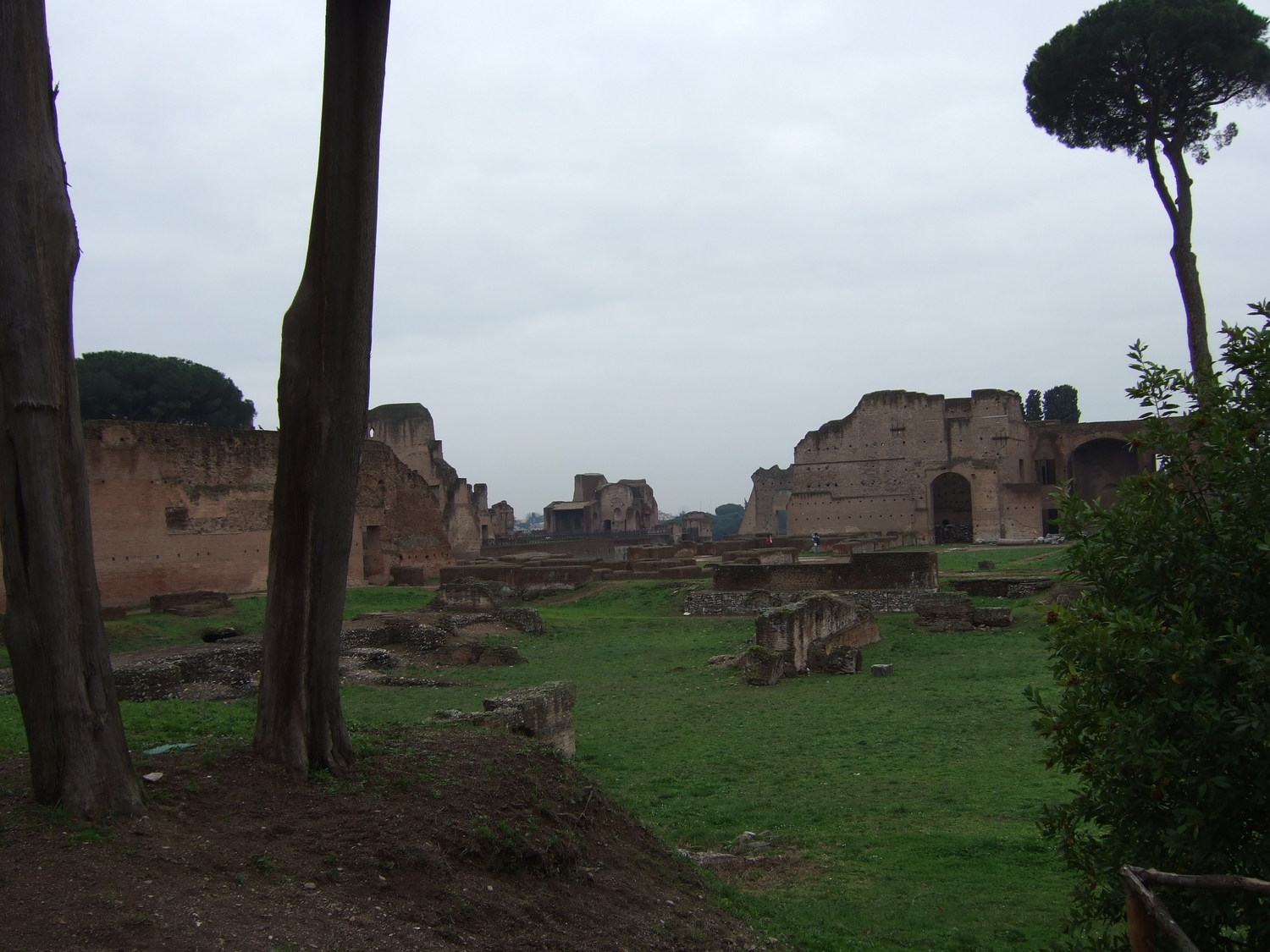 The ruins of the palaces on Palatine Hill 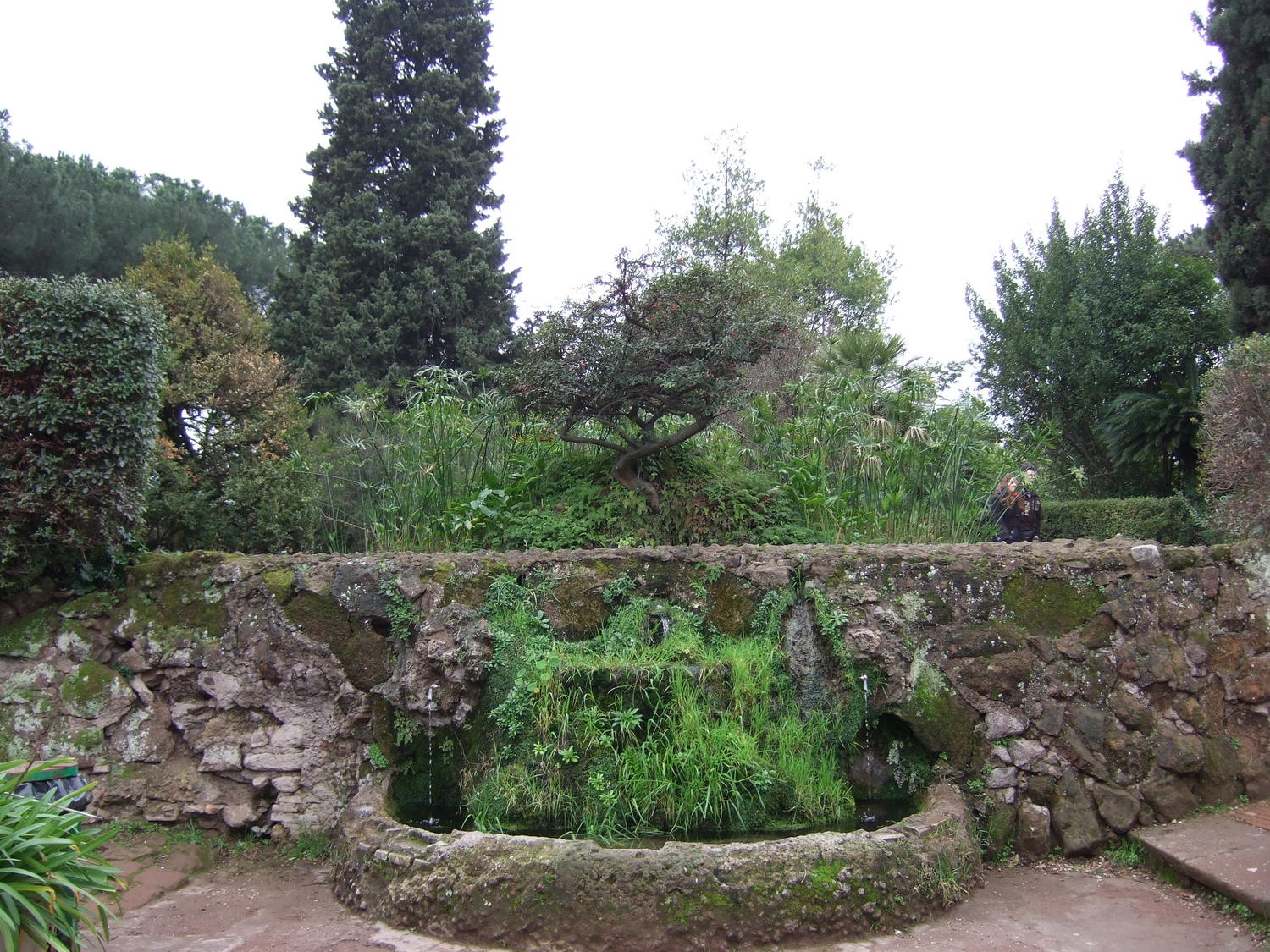 The gardens of the Palatine Hill 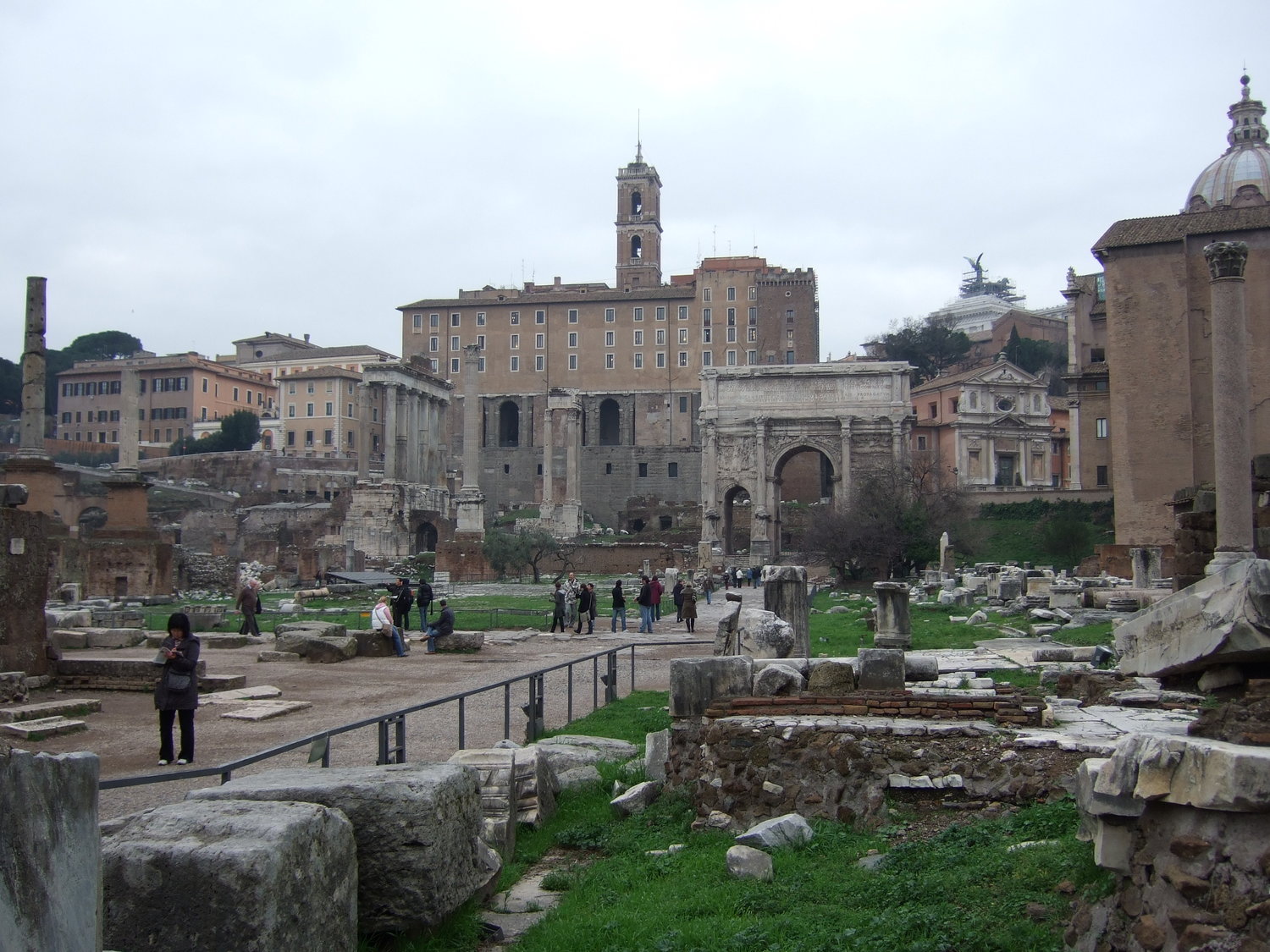 Almost six centuries Vatican City is Popes' residence. The most impressive object here is St. Peter's Basilica and square. The name of the Basilica was named after St. Peter who died there. It took 176 years to build it. The initial project was trusted for the architect Bramante, later helped by Raphael, Michelangelo, Carlo Maderno, Gian Lorenzo Bernini. Inside you will see 186-meter-long hall, decorated with sculptures, frescos, paintings, the famous Pietà on the right of the entry. It is possible to explore the inside of the Basilica and go to the catacombs where all the Popes are buried, and to go up to the Dome to admire the panoramic view of Rome. To go up the Dome you can either by feet or the elevator can take you half-way up for 5 Eur. 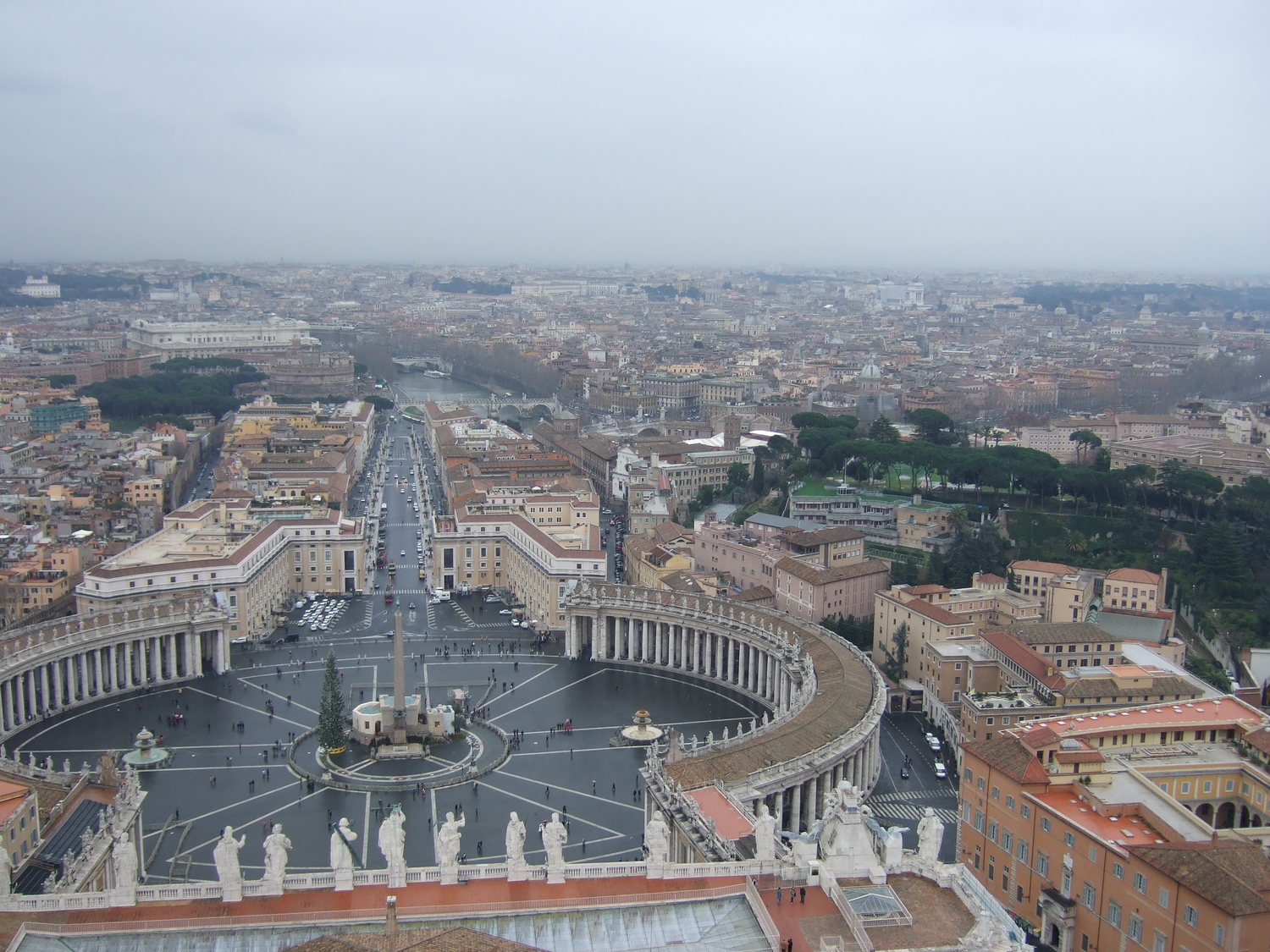 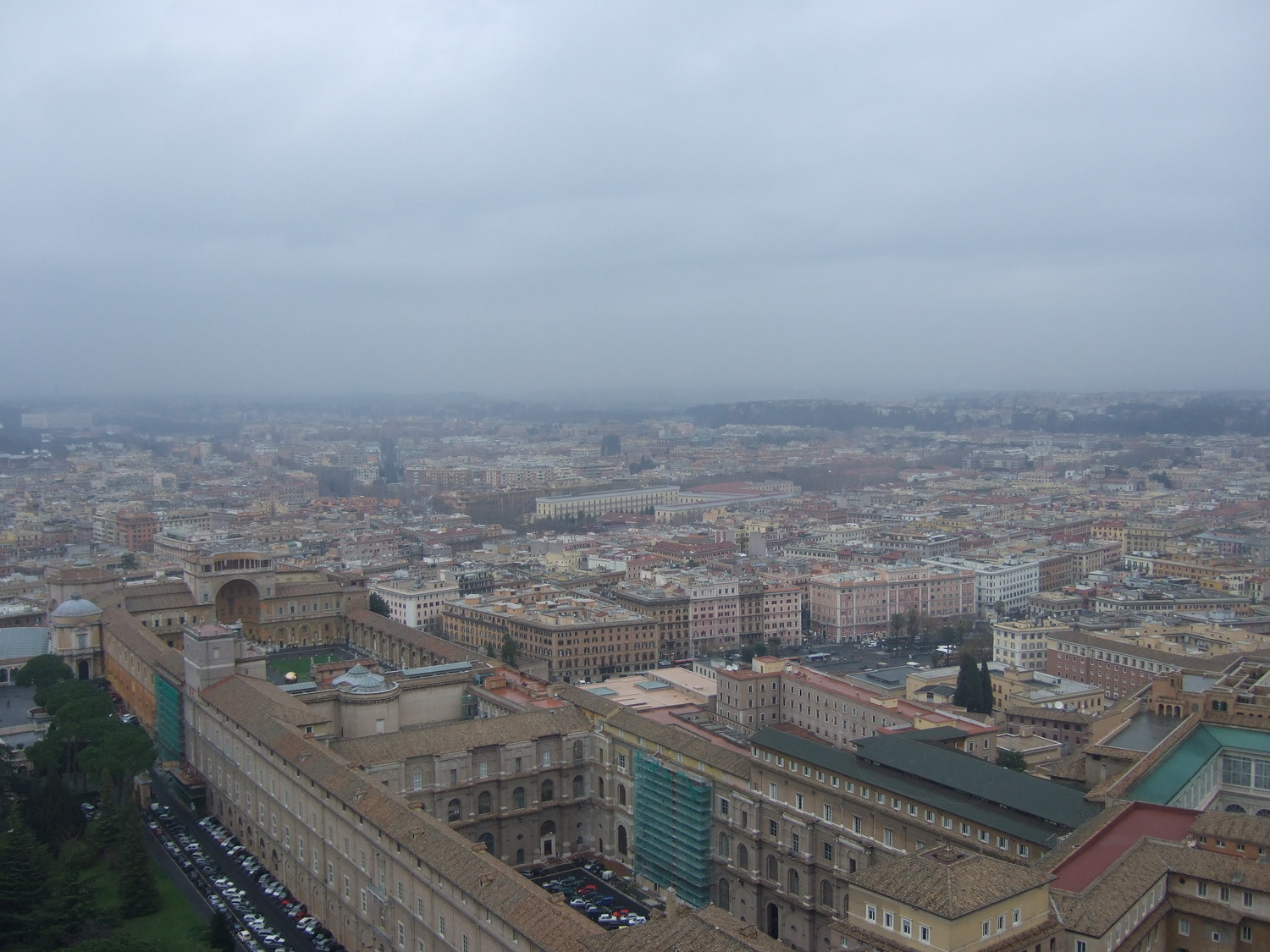 The Vatican City Museum is very impressive - what you saw in the books of history at school you can now see in person. The collection of Antiquity sculptures dominated over all other pieces seen in other museums. The magnificent Sistine Chapel, Transfiguration or The School of Athens by Raphael. You can choose several itineraries here discovering halls full of antiquity sculptures, halls of famous artists' paintings, John III Sobieski hall is not to miss. In 1683, near Vienna, his army won in the battle against Turks. After this memorable victory he became the hero of Catholic world.

Roman and Greek halls, Etruscan art hall where you will find outstanding works with minute details engraved in marble. 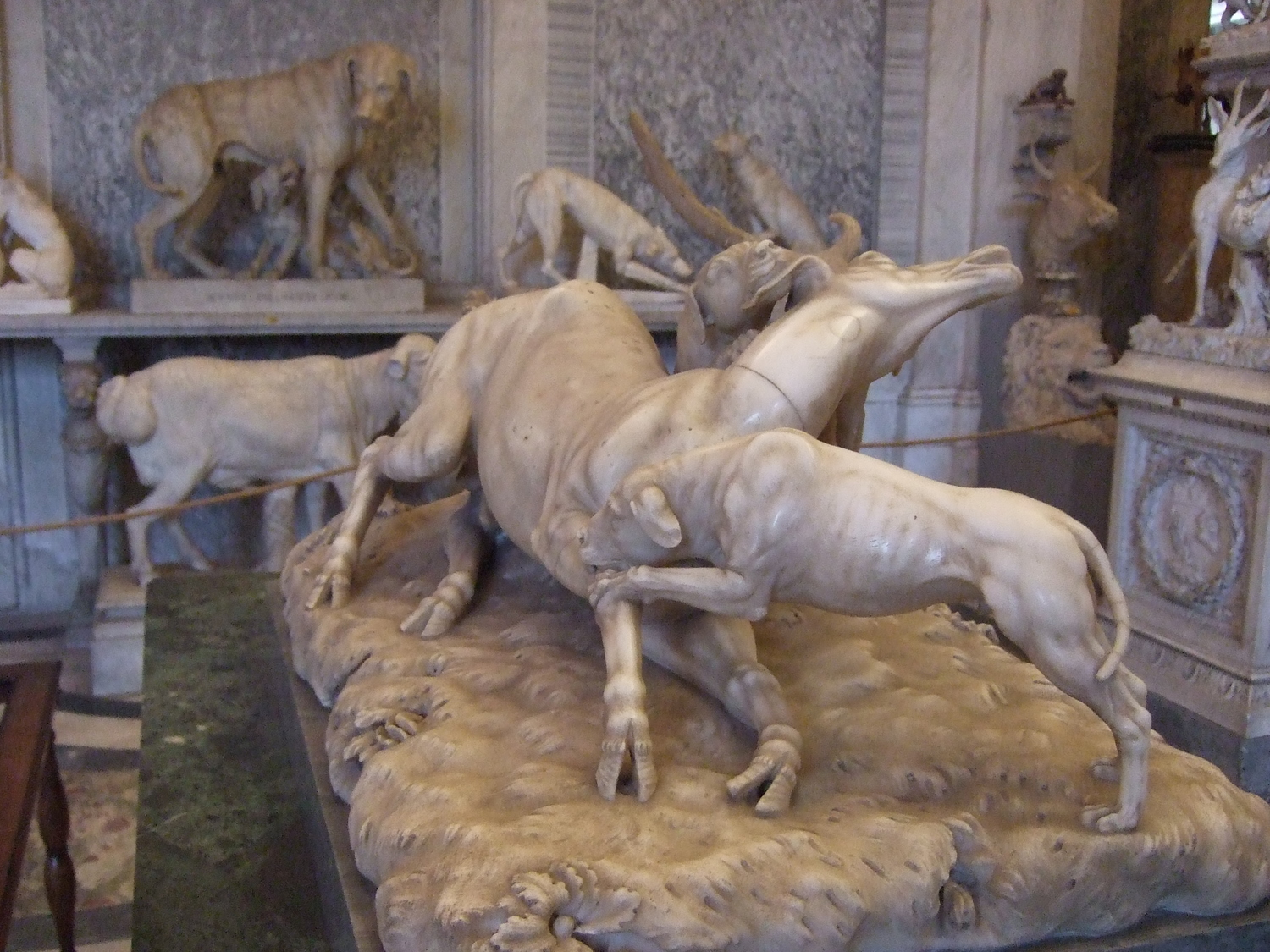 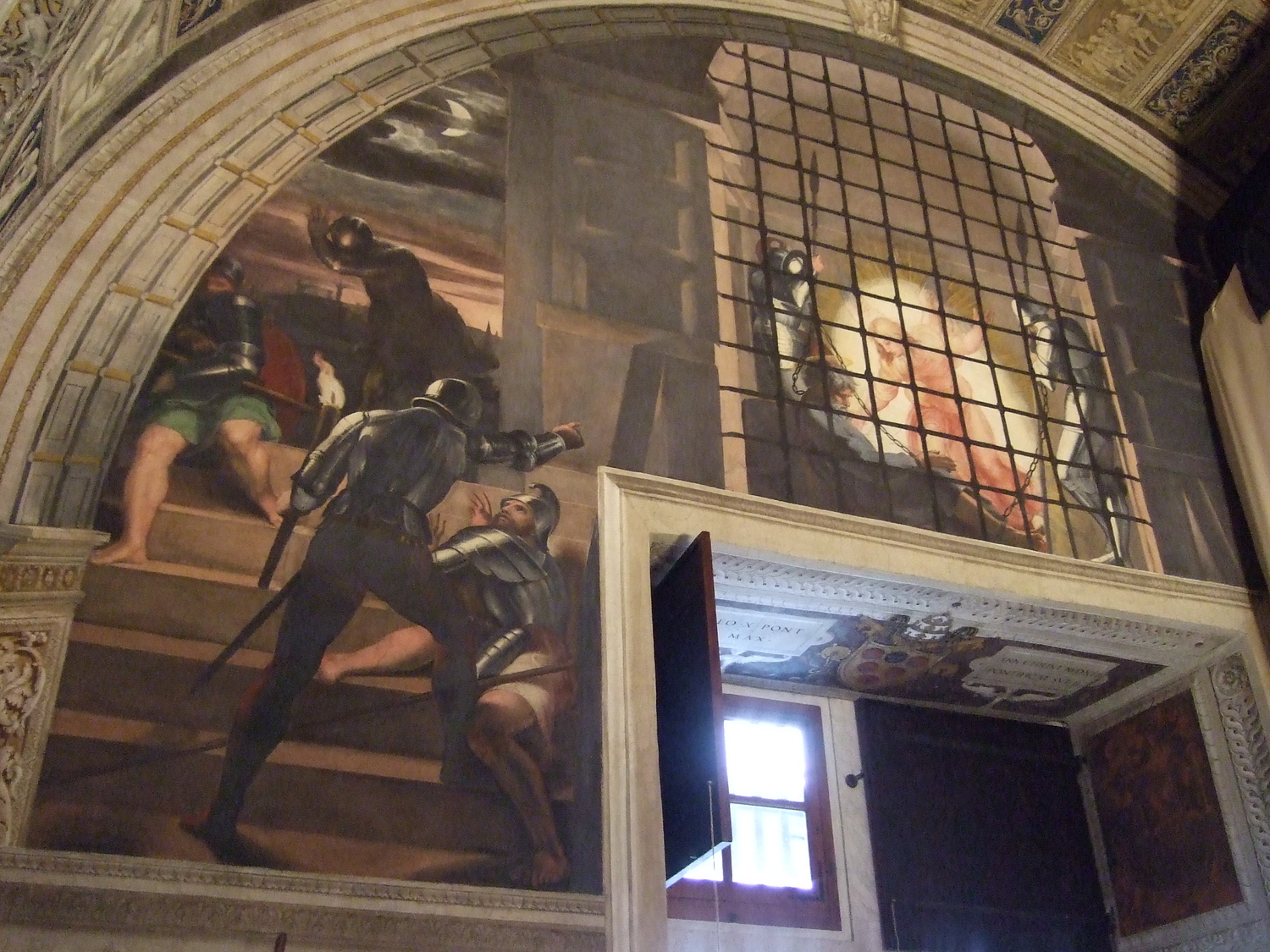 The Liberation of Saint Peter by Raphael 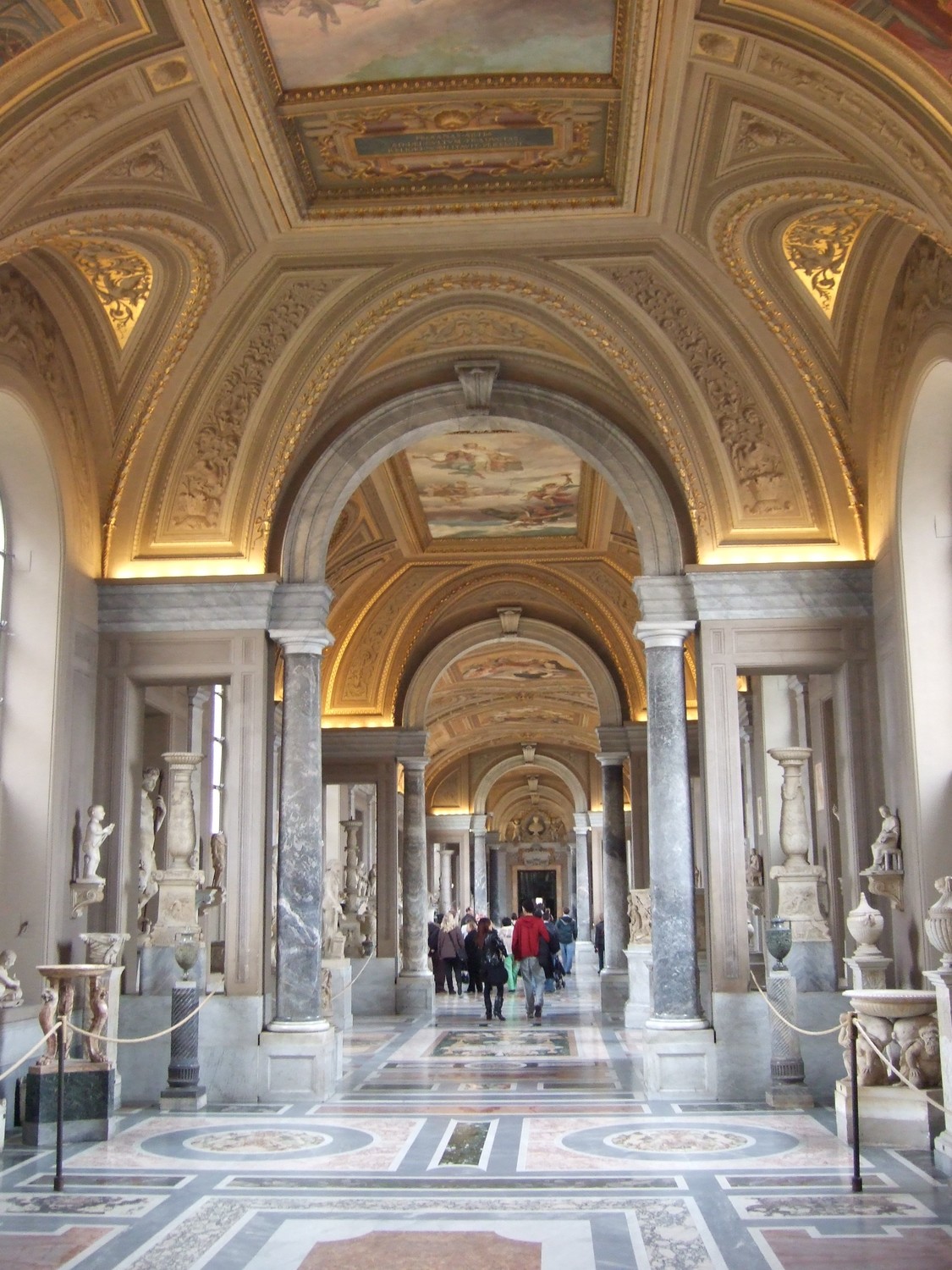 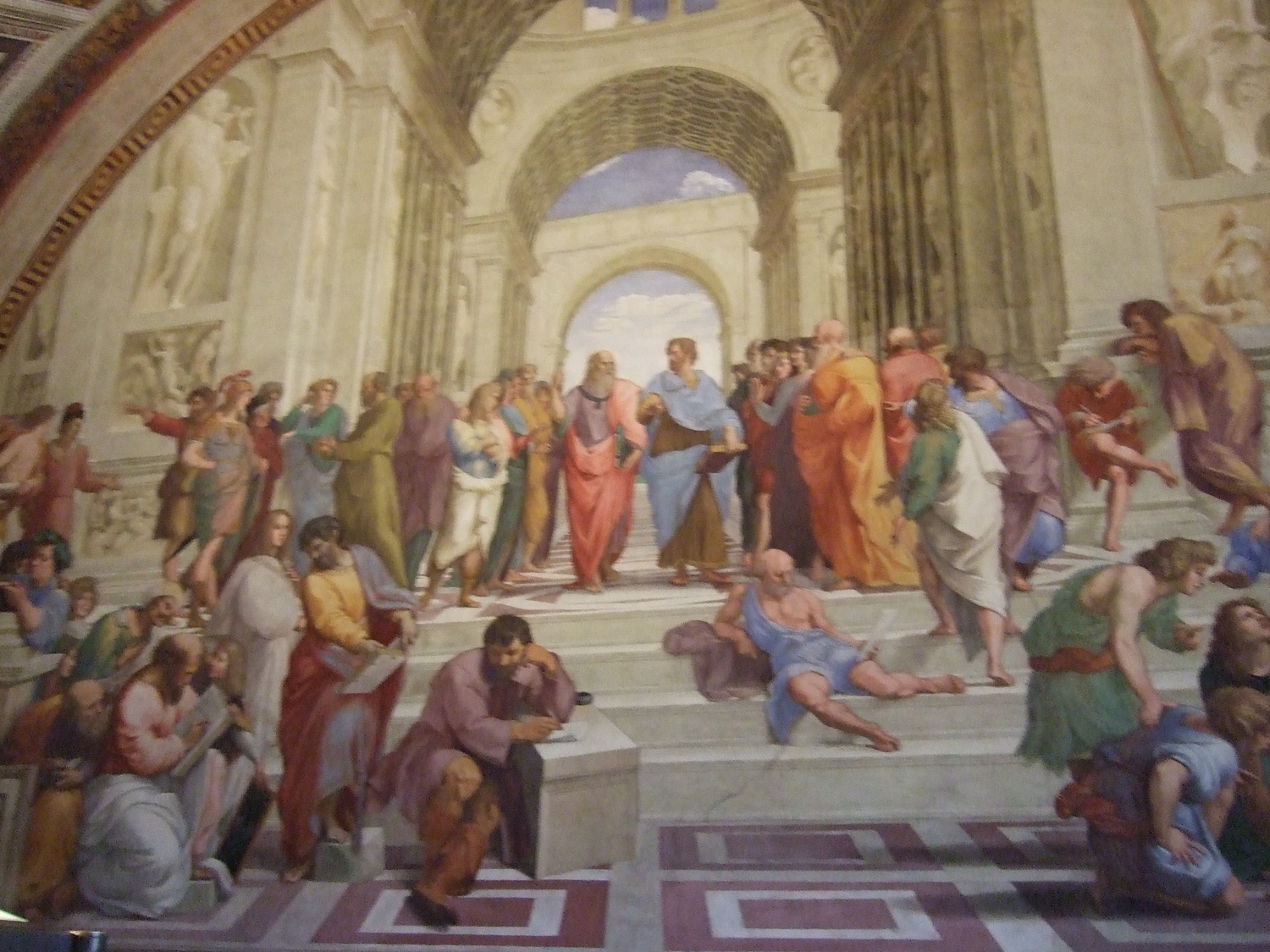 The School of Athens by Raphael 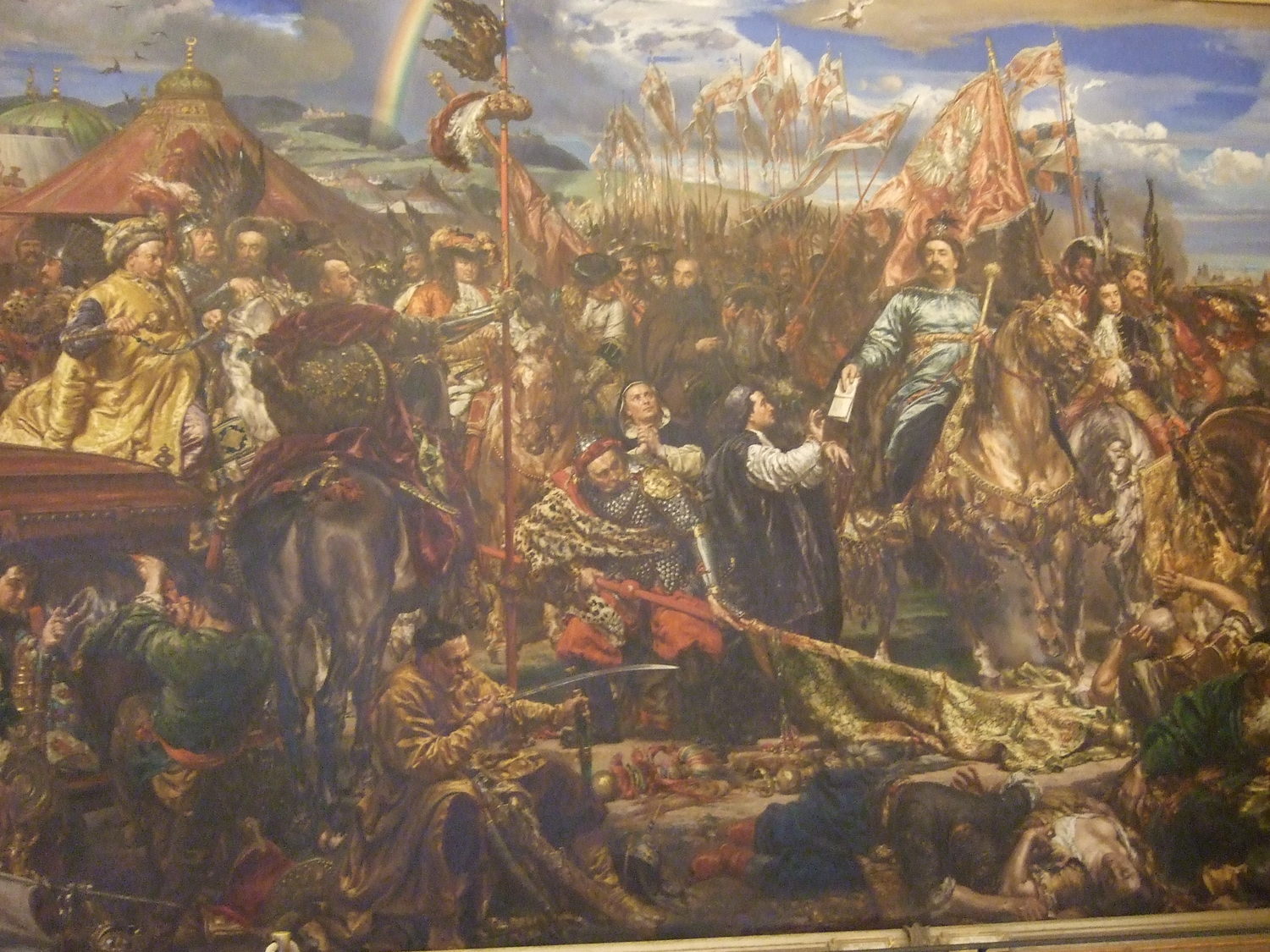 Vatican City and its museum are both worth spending the whole day there. After that, if you still have some energy, you can visit The Basilica di Santa Maria Maggiore, one of the four biggest churches in Rome. 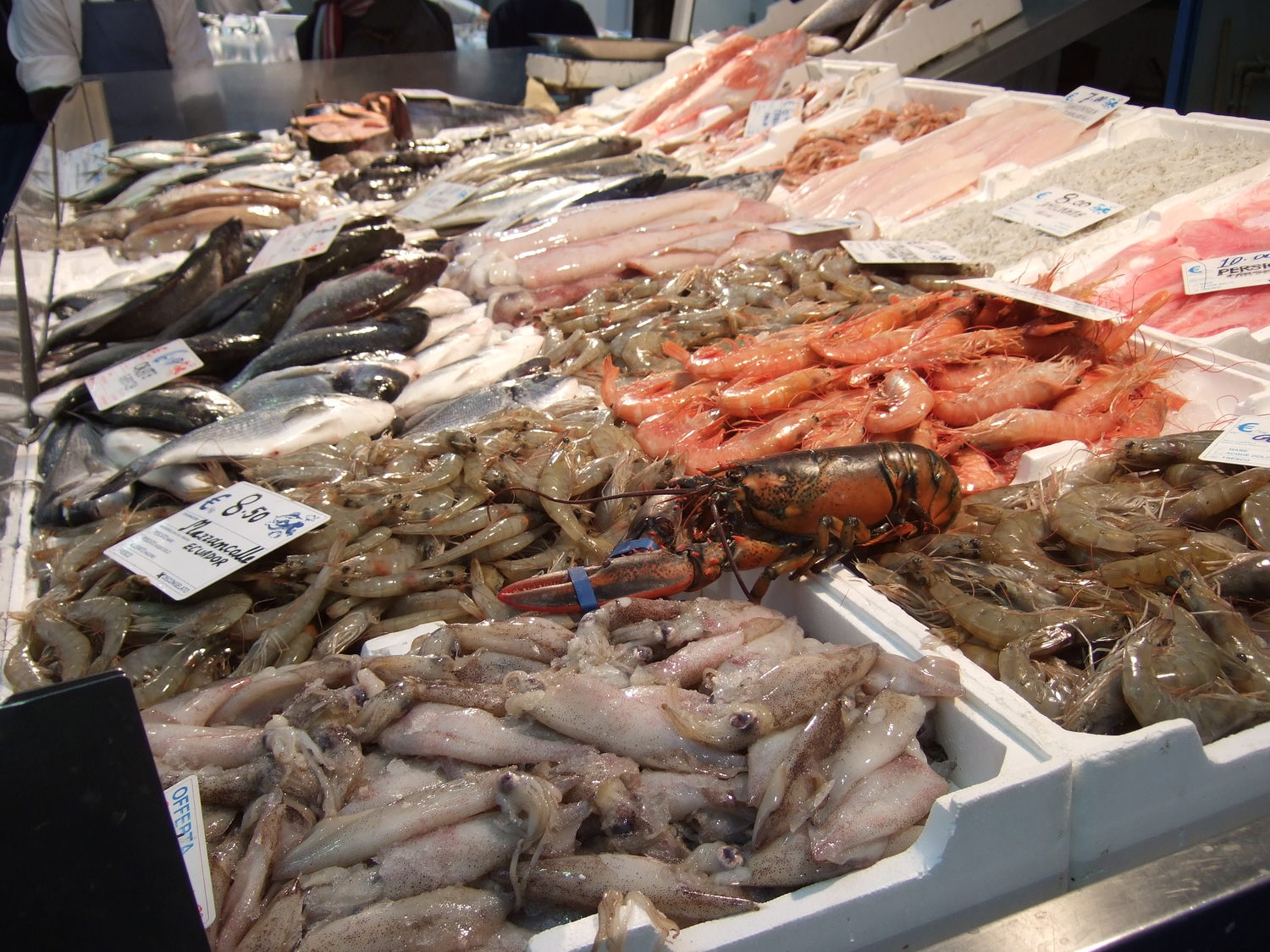 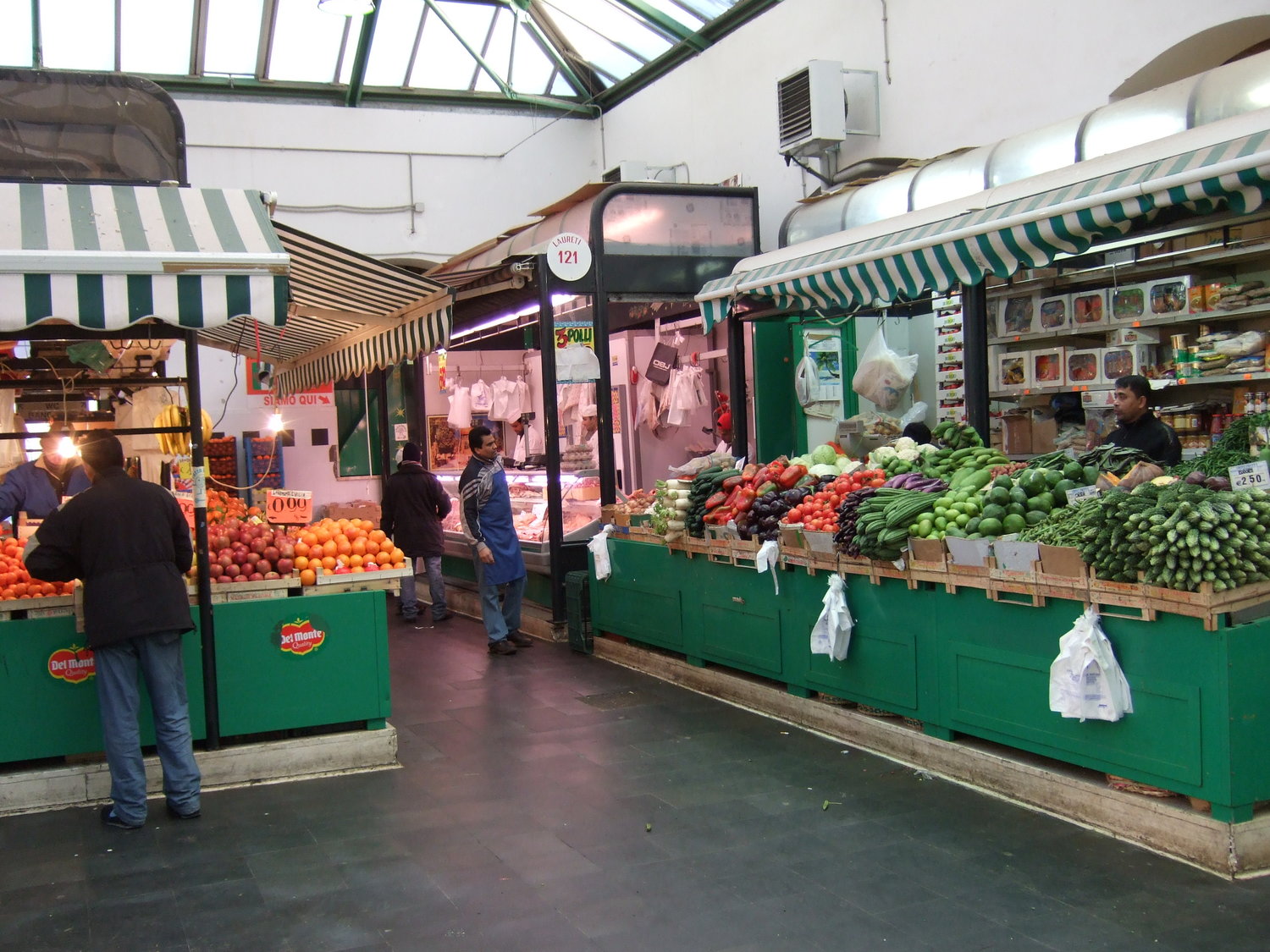 Near the food market you will also find leather and clothes market.