The Mass of the Spadone

The Mass of the Spadone and a rite that is done on January 6 in the Cividale del Friuli Cathedral, the Mass is celebrated in Latin and is accompanied by ancient Aquileian chants after the mass there is a medieval historical procession, in which the figurants take part of the Palio of San Donato, a medieval historical re-enactment held every year, and is one of the most ancient rites that is still practiced today. 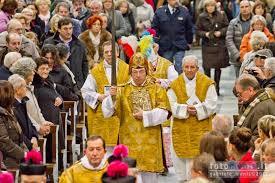 The Carnival in Pulfero manifested in the Natisone Valleys in this place the traditions have remained original since they have been handed down from father to son and from mother to daughter, these traditions in fact with have become contaminated by moderation with the passing of time, this is an event that combines the joy and the fun of dressing up and making jokes that reproduce traditions and ancient rituals, the event is celebrated in the periods of March. 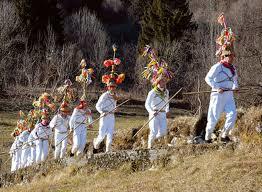 Historical re-enactment of Palmanova is celebrated in the periods of July in the beautiful town in the province of Udine many seventeenth-century re-enactors and other historical representations of other countries of Italy, the most imposing spectacle is the historic one of the Boot, it is a battle, games and duels to which all the craftsmen paretcipano all dressed in costumes of that epoch, this manifestation will succeed acoinvolgere all bolgo.

Palio das Cjarogiules in Paluzza in this food and wine event are prepared dish of the Farmer as, Salame, pancetta, and locally produced cheese, Cappuccio with lard cicciole, the host's grill and cakes. This amnifestazione is the right time to relive their own origins, through the symbol of the cjarogiule (axle with wheels and rudder) and of the louze (wooden sled) cher instruments anciently were used to transport the family goods. 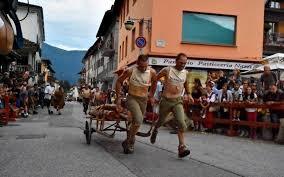 Medieval tournament on horseback are duels between the medieval knights who challenge each other in the Saracen joust, the taking of the rings, the throwing of the javelin, the clash with the lance and other games held in September. On the competition field, the presenter on horseback seeks to involve the public, and like a journey in the time of the Middle Ages, when the bravest knights came to the cities, to challenge themselves in the tests of dexterity and courage. 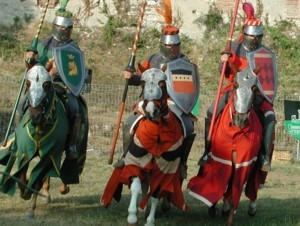 In the Krampus festival in Tarvisio in December. A Saint with a long white beard carried on a carriage through the streets of the country with howling fauns, the smoke from the torches that radiate the darkness of a light, boys and children who run away screaming in panic, the Chaos that reigns supreme. This is the scenario. The Krampus procession makes its appearance in some streets, so a first distribution of bread Krampus is made to children who have been good. 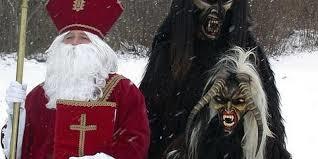 The Karst wedding is a historical re-enactment that is celebrated in the month of August, the city is decorated in a very floral way, but if there are no spouses the party will be canceled. All are dressed in traditional costumes, the groom has a dark suit of mandrieri karst, the bride wears a typical light-colored dress and wears an embroidered white handkerchief and a wreath of dried flowers (symbol of her purity) on her head, the procession starts from the Karst House and reaches the sixteenth-century church, and the rite is celebrated in Slovenian.
After the ceremony the bride and groom offer a snack of zvacet (veal stew) and finally the procession, accompanied musically, returns to the Karst House where the bride's "delivery" to the groom's family takes place and ends with the wedding dinner, only for the invited; finally, in the afternoon you can dance in the square. 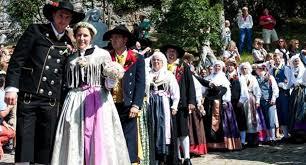 The festival of paper flowers was established because the parishioner ordained the priest Torreano but he lost it and established the feast this festival, since then every third Sunday of September the statue in the maddona crosses the streets of the city covered with flowers elaborated by women. 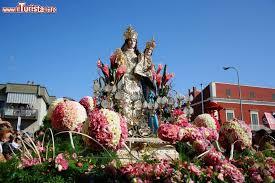