The historical monuments in Ancona

The cathedral of Ancona

It is a medieval church with a mixed style of Romanesque and Byzantine. According to ancient tradition they built a temple dedicated to Aphrodite when the city was a Greek colony with the name Ankon. Above it was built a church in the sixth century. In 995-1015 a new church was built, which preserved the original walls. The church, which was previously dedicated to San Lorenzo, was then dedicated again to San Ciriaco Martire. In 1883 it was restored. During the First World War it was damaged by a bombing. In 1920 it was repaired but in the Second World War other bombings destroyed the south transept and the Crypt under it, together with the art objects it kept. In 1926 the cathedral was declared a minor basilica. 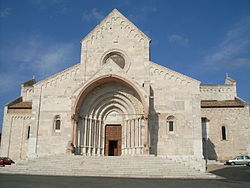 It was designed in the 1920s in the shape of a circular temple with a Doric order. The structure has eight columns of Istrian stone. The base is decorated with swords and helmets, a symbol of defense and attack. In the center is a small altar. Tradition has it that the entire structure seen from the sea looks like an eagle with ramps that symbolize the open wings and the symbol of the crowned head. 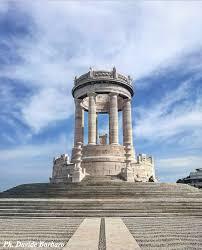 One of the most important examples of Roman architecture. It was built in the first century by the emperor Trajan on the port of Ancona. It has a single arch and sides of fluted Corinthian columns. The three inscriptions are still legible today. In a scene on the column, we can see how originally there were three statues of gods related to navigation. Neptune as the god of the sea, Portuno as the god of ports and Mercury as the god of travelers. On the keys of the vault there are two personified Tellus and Oceanus busts that meant the passage between sea and land.

The facade has a Venetian Gothic style divided into three parts by four columns. Each column contains a statue that represents the 4 cardinal virtues, that is, hope, fortitude, charity, justice. In 1556 a fire during the theatrical performance of the carnival damaged it but was then repaired and restored. 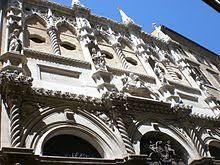 The Pope decided to improve the conditions of the port and entrusted the architect Vanvitelli with the task of restoring the port and building the Lazzaretto. Work began on 27 July 1733 and ended ten years later. Originally it was a fortification defending the port, depositing goods, protecting the port from waves. It was also used as a military hospital, a sugar refinery, and a tobacco warehouse. But it is then restored to its original appearance and so today is used for temporary art exhibitions and other cultural events. From here you start calling with the name of Mole Vanvitelliana. During the two world wars the work of Vanvitelli was bombed and damaged during the attack on the night of 24 May 1915 by the Habsburg fleet. 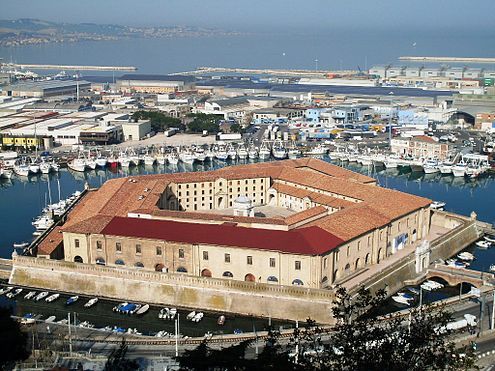 St. Mary of the square church

Built between the 11th and 12th centuries in Romanesque style. It was built on an early Christian church of the 4th century restored in the VI; a part of the floor of the present church is made of glass to allow the vision of the Paleochristian mosaics below. It has a basilical plan, with three naves and a trussed roof. In the lower part there are two layers of mosaics rich in symbolic figures that belonged to a Palocristian temple. But there is also a well, remains of Greek city walls, remains of some frescoes.

The Castle of Piticchio

It dates back to the thirteenth century, but its fortifications from the fifteenth century. The walls are perfectly preserved in good condition and make it magnificent. The splendid walkway can be admired marvelous panoramas made of hills with surprising color contrasts. The entire boundary wall is supported by a large shoe on which the defensive towers rest. 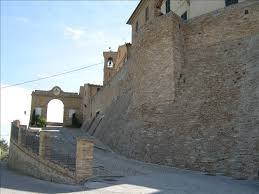 Perhaps the inner part belonged to a theater of the Greek period. The building dates back to the age of Augustus. The abandonment of the building presumably occurred in the 6th century AD. It was rediscovered in 1810. Since the 2000s, the archaeological area of the amphitheater has been used as a meeting place where to listen to poems and lyrics. Excavations have led to the discovery of a road dating back to the time of the Greek colony.

It is a quadrangular building with an eccentric keep and rests on a cliff that increases its defensive purpose. The building is built in a solid ring of thick walls, where the main patrol walkway runs. Currently one enters the interior from an entrance and enters a gallery with a pointed arch. At the end of the tunnel is the tower of the well. The other two wooden shelves. Originally the entrances were in the tower connected by two towers, one large for wagons and horses and a small one for people. The keep while it is divided into 5 floors. Inside there is a rich display of ancient weapons and precious finds.

In 1559 it was built in a Mannerist Renaissance style. It is a long series of thirteen panels separated by volutes, centered on as many masks. The 12 bronze measurers and the central stone one represent satites and silens. According to an ancient tradition, the traveler who wants to return to the city should drink the water that flows from the fountain.

It is an ancient monumental gateway to the city of Ancona. It is a triumphal arch with a single arch, enclosed within two pilasters and lateral wings. The arch and wings are characterized by smooth overlapping stone blocks. The order is in the Ionic fifteenth century style. It was built between 1787 and 1789 at the behest of Pope Pius VI. Next to the door a monument was placed, in the shape of an anchor, in memory of people who disappeared at sea.

It is a triumphal arch with a single arch, built in Istrian stone. on the sides, two alveolate columns and two controlesene for each of them unfold symmetrically and finally two angular pillars. It was erected in honor of Pope Clement XII, by will of the Senate for his gratitude. The Clementino arch is the gateway to the city from the sea. Due to Vanvitelli's death the bow remained incomplete; later the work was resumed at the request of Pope Benedict XIV by another.

It was built by the Augustinians in 1341. On the portal there are statues depicting Santa Monica and San Nicola da Tolentino, San Simpliciano and Blessed Agostino Trionfi. The interiors are modified after the unification of Italy and destroyed due to the second world war, but then it was restored. In the rear part there is a space already called the oratory of San Nicola da Tolentino, of which a column remains visible. The paintings are now partially displayed at the Francesco Podesti Civic Art Gallery.