It was built in 1438 as a parish church and court church in late Gothic style. The external facade has a Baroque style. A fresco has been called fresco of the scourges of God that represents a plea for forgiveness and reconciliation and tells what happened in Graz in 1480. The interior has a Gothic architecture and a Baroque decor. The real jewels are the two reliquaries on the right and left of the altar. 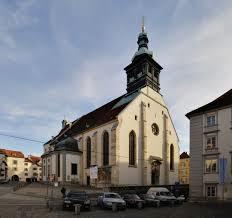 It has 365 windows, 31 rooms per floor, 24 rooms, 52 doors, 60 windows, 4 corner towers that refer to time, seasons, days, minutes, hours, seconds. The ceiling is painted with the 7 known planets, the days of the week, the Roman gods, the virtues of the Eggenberg family and the 12 zodiac signs. The castle has an original natural park and the biggest attraction is the peacocks. Also the castle museum is interesting and includes collections of Roman stones from Austria, the prehistoric and ancient history department, works of art from the Romanesque to the Baroque. 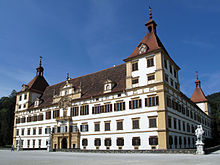 It is a great stage for shows ranging from opera to musical theater and ballet performances. It was built in 1899. A bomb from the Second World War destroyed the outer colonnade but the interior fortunately remained completely intact. The interior is all decorated in Baroque style. 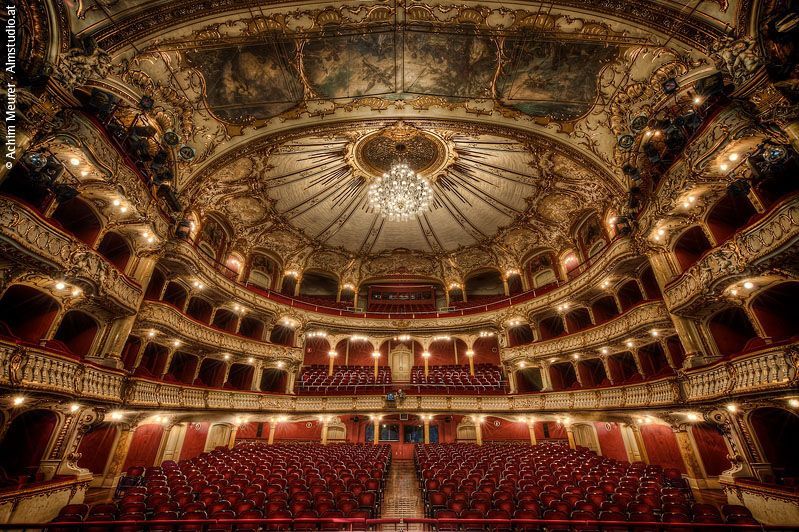 It is the oldest monastic complex in the city, founded in 1239 by the younger brothers of the order of St. Francis. The Gothic cloister surrounds a garden with some benches and invites to silence. The inner courtyard of the cloister is covered with red roses. On the walls it is possible to read the names, professions, personal data of the noble citizens who were buried here. Here the monks meet for the moment of prayer. 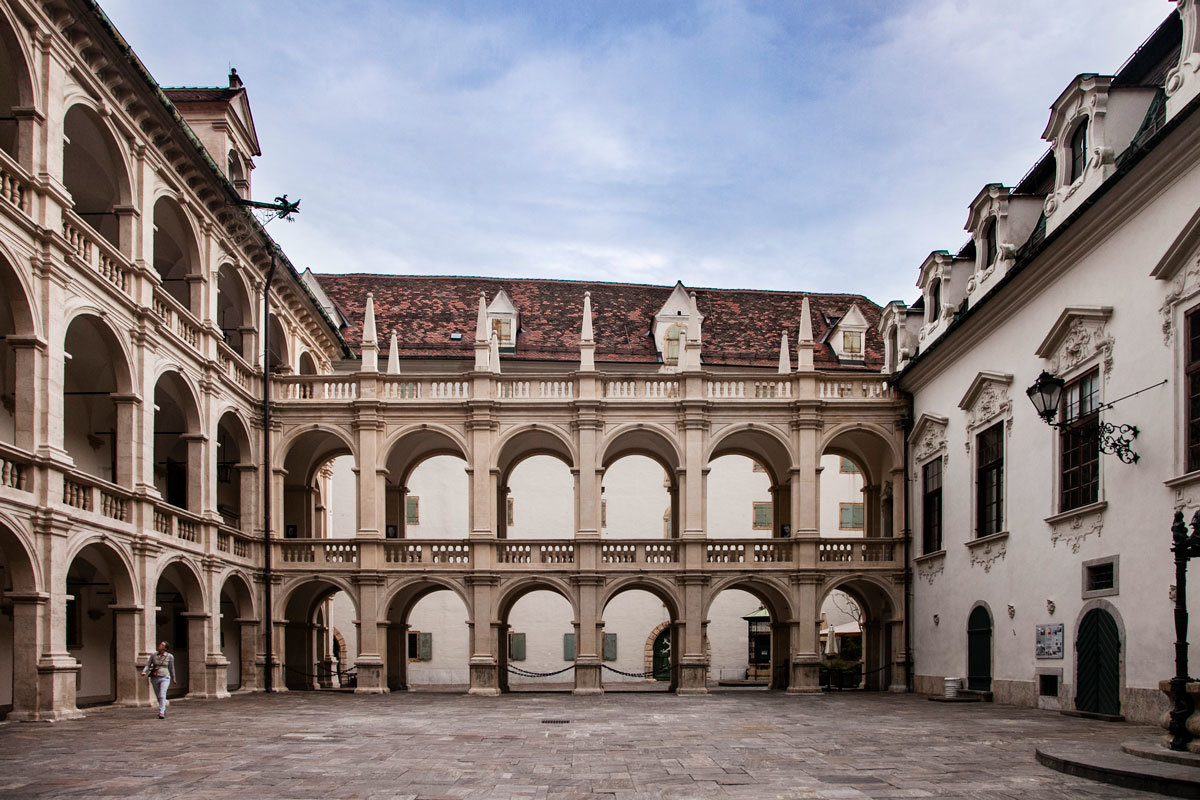 The emperor Ferdinand II gave the task to his court painter to make his funeral monument. The facade of the church has a Baroque style. On the tympanum is the statue of Catherine of Alexandria and she looks towards the Jesuit college opposite, where the first university of Graz was founded. Only an inscription on the wall shows where Ferdinand's tomb is. In the barrel vault is the fresco of the liberation of Vienna from the Turks in 1683. 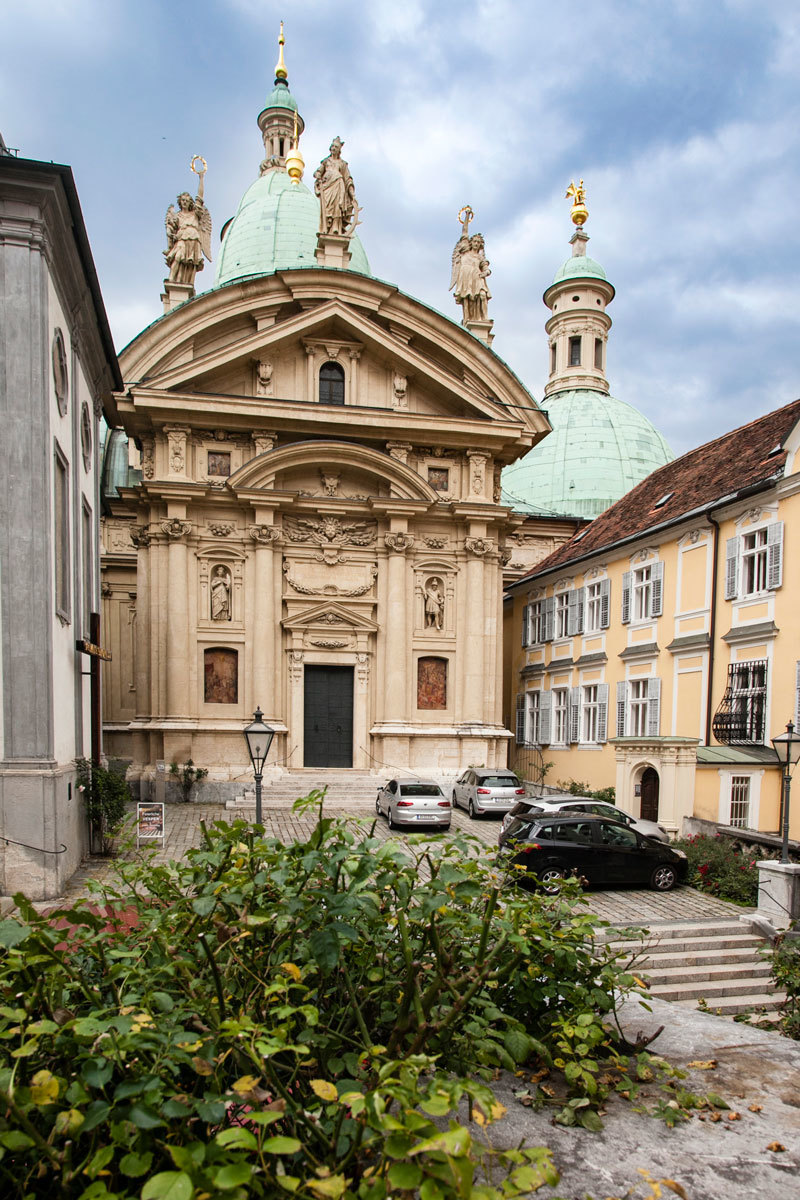 Also called the "scale of reconciliation", that is, there are two separate scales that join together on each floor, to then divide and reunite again. The famous double-helix staircase and the letters AEIOU dates back to the Gothic period. Even today they are an enigma for historians. This masterpiece is often interpreted as a symbol for eternity, since they are separate paths that lead to the meeting. 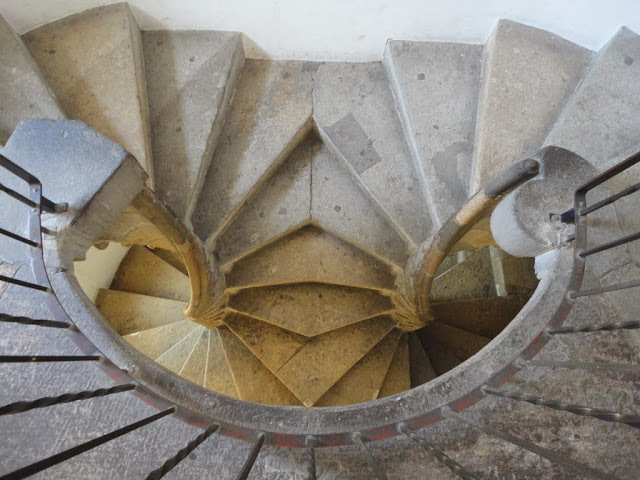 It was built in 1440. It is a church with three Gothic naves and a long, narrow choir. Thus the parish became a Jesuit church. A bomb from the Second World War destroyed the Gothic windows of the choir. But then they were rebuilt. 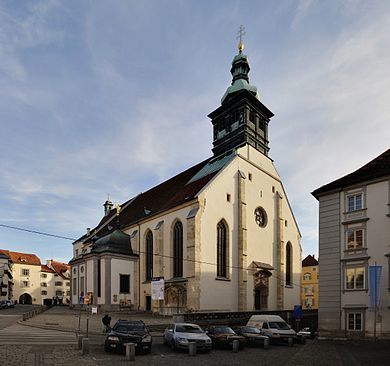 It has the mechanism of inverted hands. This was because the clocks originally had only the hour hand, very long and visible even from far away and that of the minutes was introduced only later. At the 3 corners of the tower there are heraldic coats of arms which once decorated the walls, and are the Styrian panther with the crown, the king's eagle and the double-headed eagle. The stone dog stands guard next to the tower, because it is said that the barking of the dog saved from the kidnapping of the emperor's daughter. 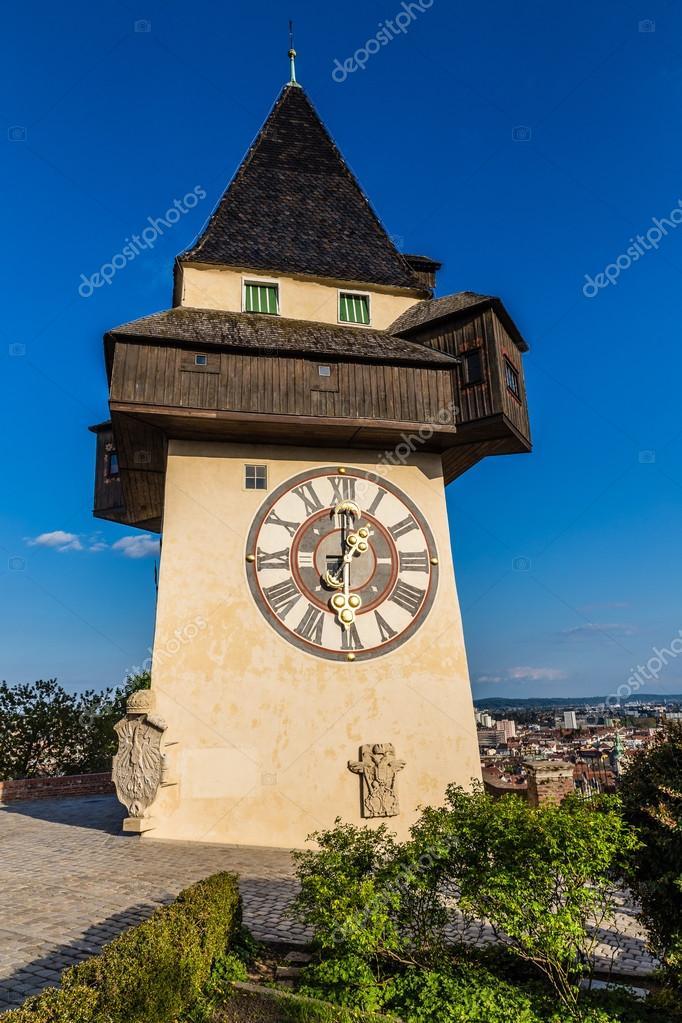 Construction began in 1803 and ended in 1893. It was also used as a prison. The interior has a council chamber, a coffered ceiling, a gallery, wood paneling on the walls, chandeliers and wall clocks. Everything is in Baroque style. The statues representing the craft, art, science and commerce and of some important Austrian personalities were also removed above the portal. Some have been re-installed in the last period. 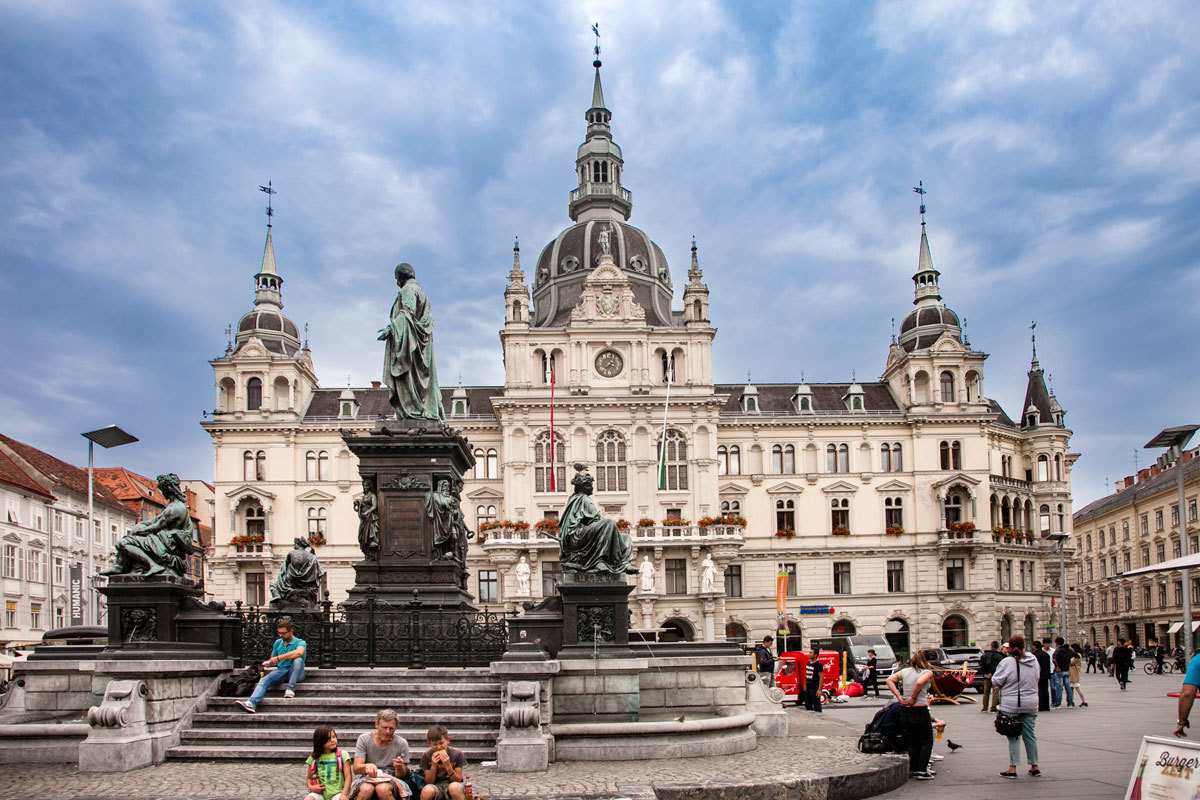 Church of Our Lady of Relief

It was built as a venue for the monks of the minority order starting from 1607. The baroque style lasted 4 years and at the beginning the two towers did not complete the facade. The towers are added only afterwards and the construction ends two years. On the tympanum of the façade there is a statue, in baroque style, of the archangel Gabriel that pushes the representation of lucifer inside the church. 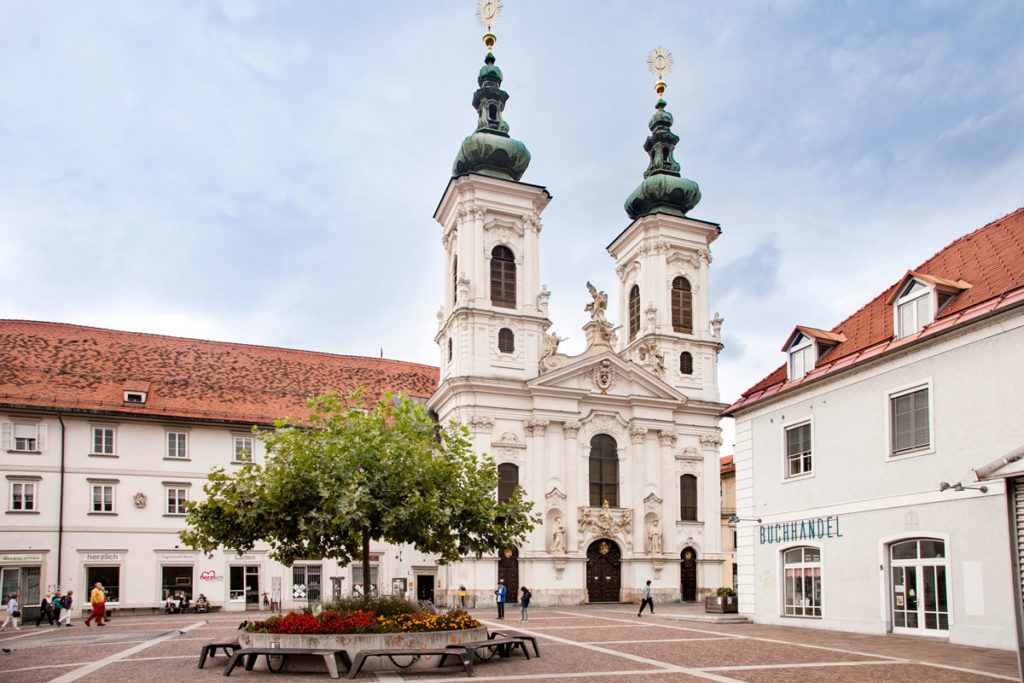