What to see in Marche?

The best monuments in Marche

The medieval Cathedral of Ancona

The cathedral is dedicated to San Ciriaco, the patron saint of the city. It is here that Romanesque architecture merges and intertwines with the Byzantine one given the influence that the East has had towards it. The interior has a Greek cross and three naves on Roman columns. We must stop to admire some sacred objects wrapped in an aura of mystery and suggestions. One finds the miraculous painting of the Virgin of all saints, and it seems that the eyes of the Madonna have moved on more than one occasion. The Cathedral of San Ciriaco is also one of the most romantic places in Ancona that becomes even more impressive at sunset. 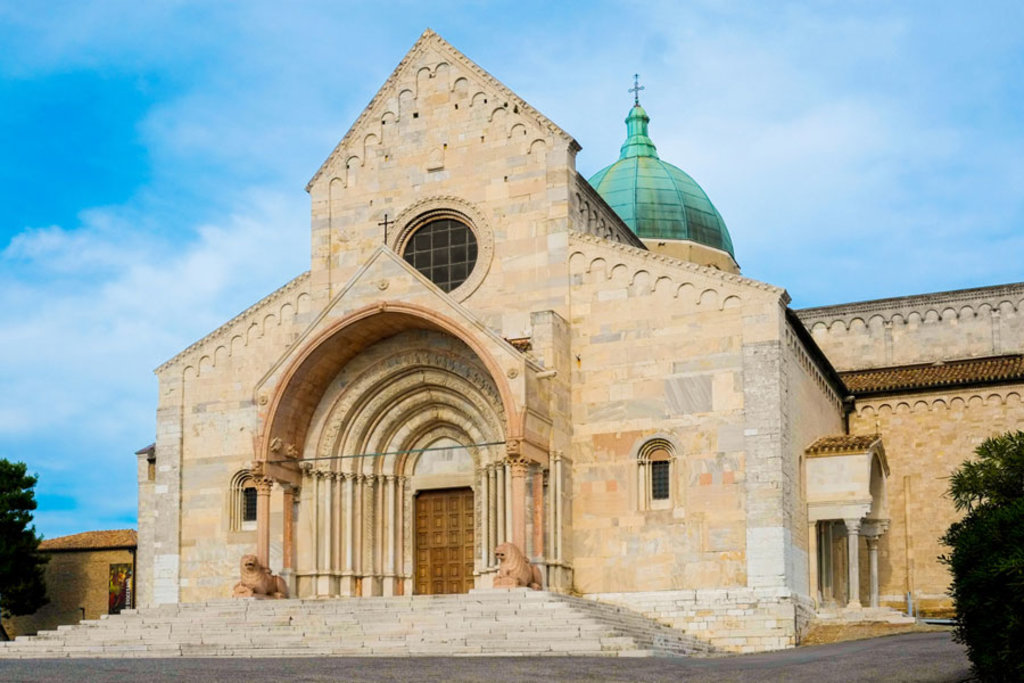 The Ducal Palace of Urbino

It was built at the behest of Federico da Montefeltro. The origins of the building date back to when Count Antonio da Montefeltro, Federico's grandfather, decided to settle in front of the Duomo. When Federico took power, he built the three-storey building of the Jole, in austere, simple and typically Tuscan style. The arcaded courtyard was settled, with harmonious and classic forms, round arches, oculi and Corinthian columns on the ground floor. He also created the Grand Staircase, the Library, the Sala degli Angeli, the Sala delle Udienze and the Sopallalle. The architect, engineer and artist of Giorgio Martini completed the building and added a complex, revolutionary and innovative water system for the time to the building. All the rooms on the first and second floors of the building are occupied by the Marche National Gallery.

It stands right at the entrance of a high mountain cave near Genga and the Frasassi Caves. It has an octagonal plan, a neoclassical shape and it is as if it wanted to seek refuge in the dark natural cavity. Inside was a Madonna and Child sculpted by Canova's workshop, replaced by a copy: the original is kept in the Genga Museum. 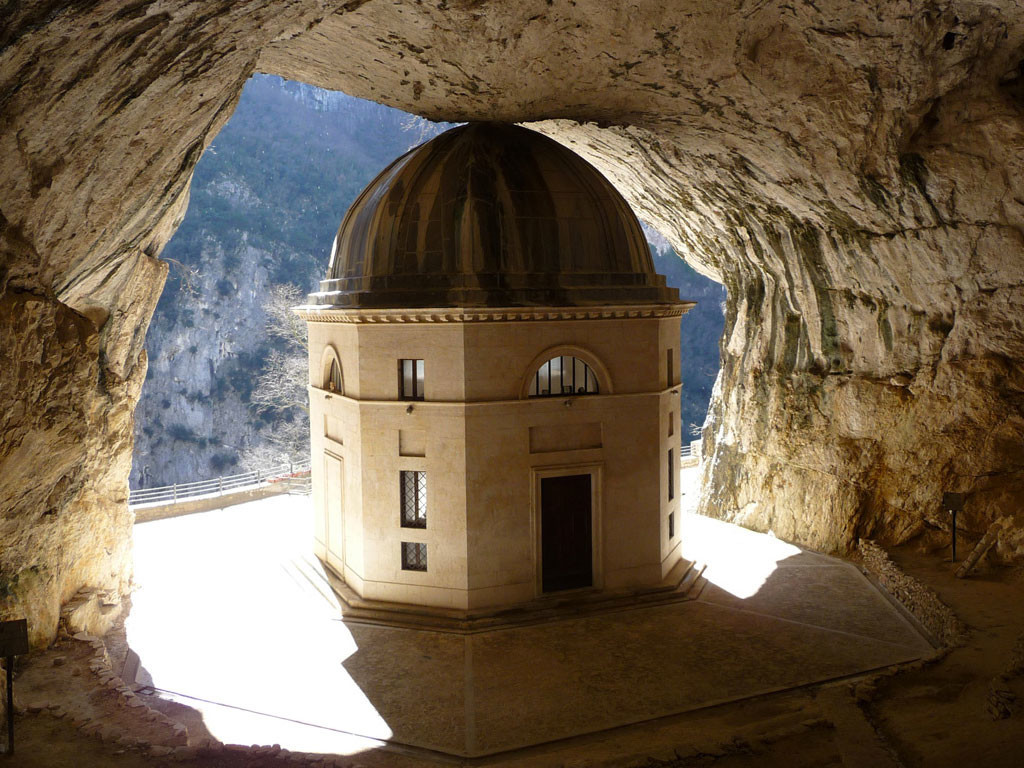 The House of Giacomo Leopardi

On the Marche hills, rises the birthplace of Giacomo Leopardi and his family's ancient home. A place still alive, still inhabited, where you can discover the soul of the poet, immerse yourself in his lyrics. The house where Leopardi grew up is a museum. And in this house his father had an impressive library, which made Giacomo good. He began writing prose and poetry at an early age on topics of history, philosophy and science, from his studies in the library, both in Italian and in Latin. Greek and Hebrew have been taught. Giacomo enjoys translating texts into Italian into Italian.
His most acclaimed poems have been written here: The Infinite is the most loved, but also the Dream, to Spring and to the Moon.  Palace Leopardi houses the precious library-museum, composed of about 20,000 volumes, which has maintained its original atmosphere unchanged over time. Memories of childhood, personal objects, archival documents, manuscripts and books dear to the poet tell visitors new aspects of the work and life of Giacomo and his family. The visit to the house of "Silvia" offers the public a new key to reading poetry. An unusual change of perspective: no longer Giacomo who looks at "Silvia", but the poet seen through the eyes of the young woman. 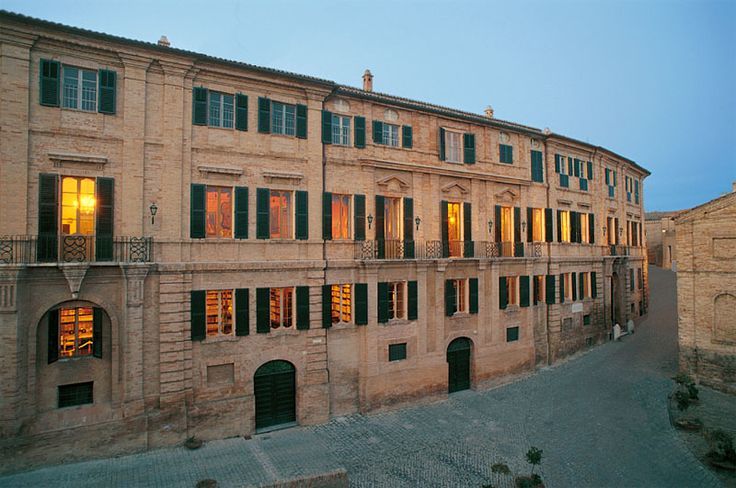 Arch of Augustus in Fano

It is not actually an honorary arch, rather the main gateway to the city, probably to better testify to the gratitude to the emperor Caesar Octavian Augustus. The door built in white stone has 3 openings. The upper part of the building and the two powerful side towers were lost in 1463, when Federico da Montefeltro's troops besieged the city to drive out Sigismondo Pandolfo Malatesta.

The House of Raffaello

The birthplace of Raffaello is part of the "Museo Diffuso" project. It is a specialized museum. This precious building was purchased in 1875 by the Accademia Raffaello. The seat of the Academy has been restored. The house, built in the fifteenth century, was purchased by Giovanni Santi in 1460. He worked at the court of Federico da Montefeltro. The house was a place where living space and laboratory coexisted.
The frames and interior doors follow the fashion of the time and the typical stone chairs, the ceiling and the windows. Then there is a small room, probably Raphael was born there. A design, apparently by Bramante, deserves a visit to the collection of Renaissance ceramics, temporarily preserved there, but part of the Volponi collection. The academy, but also manuscripts, portraits, coins, which constitute a celebratory and evocative collection of the nineteenth century. 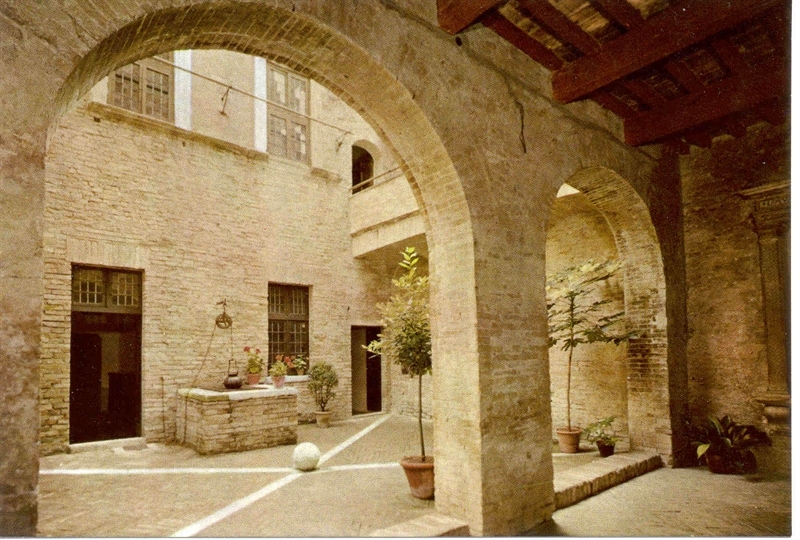 The Frasassi Caves are underground karst caves that are located within the Regional Natural Park of Gola della Rossa and Frasassi. Inside the karst cavities you can admire natural sculptures formed by calcareous stratifications over 190 million years thanks to the work of water and rock.The shapes and dimensions of these natural works have stimulated the imagination of speleologists, who later have "baptized" them, naming them in a curious way; as: the "Giants", the "Camel" and the "Dromedary", the "Orsa", the "Madonnina", the "Sword of Damocles". 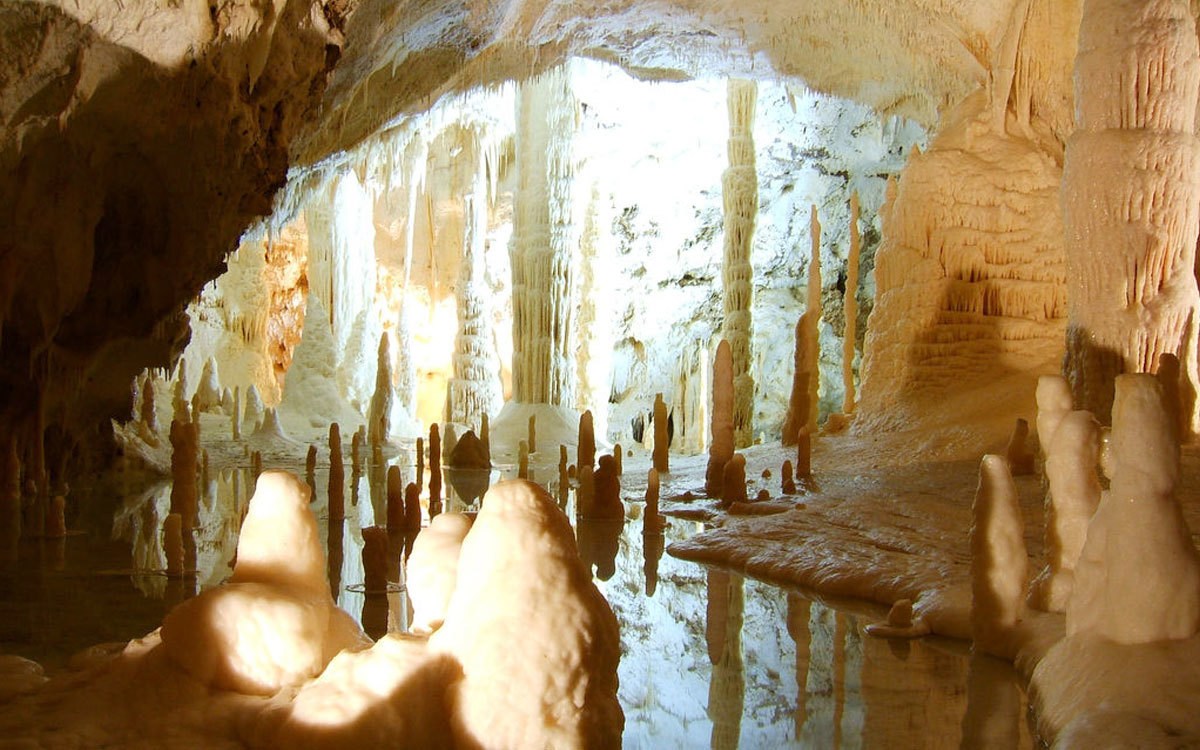 It is a significant example of eighteenth-century architecture, begun precisely in the 700s by the Pianetti family and then restructured on the occasion of the marriage of Vincenzo Pianetti. On the first floor we find the Stucchi Gallery and the rooms decorated with the story of Aeneas. On the second floor there are the family`s daily environments such us studios, living room, bedrooms and bathrooms. In the inner courtyard you can admire the classic example of an Italian garden. The finds inside the museum are positioned according to a chronological order, prehistory, protohistory, and Roman age. 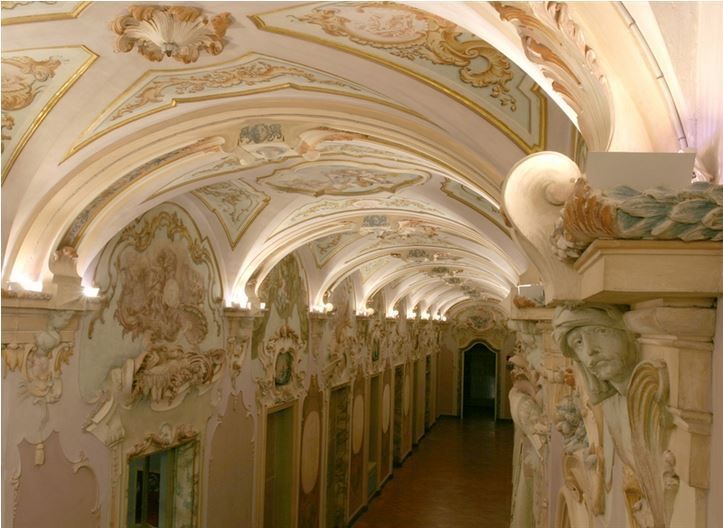 Restaurant "The Madonnina of the fisherman"

This restaurant is located in front of the sea and the beautiful beach, behind the green and welcoming hills near the city. The kitchen is mainly focused on fish and combines imagination with the ability to blend raw materials. The architecture and the setting reflect a prudent and service-minded modernity, flexible and composed. 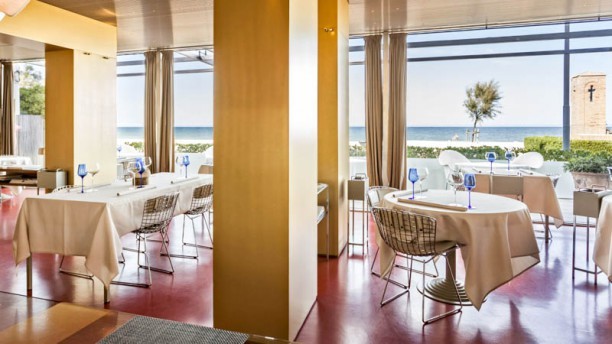 The Scudiero has always been synonymous with haute cuisine, Pesaro and Marche, sea and hills. Going down the stairs at the entrance takes a journey back in time, towards a glorious past: a careful and passionate recovery has helped transform the stables into a house full of warmth, light, elegance, without giving up anything of the charm of history. 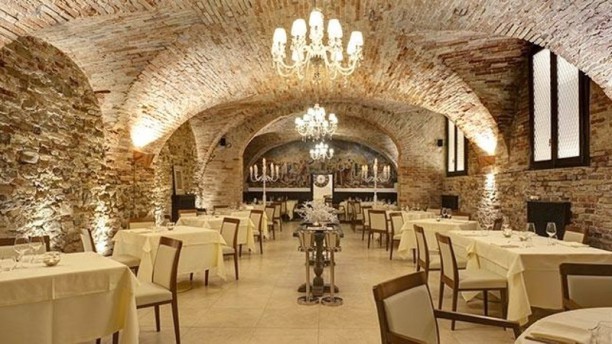 It is located in a historic and charming building. Noteworthy are the cross vaults renovated with extreme skill and the cellar with underground caves, once a street of gufa and a place for storing snow, also available to eat in a truly unique setting. The main attraction of the restaurant's menu is certainly represented by the meat, which creates delicious dishes according to the tradition of the territory and with superfine tastes. 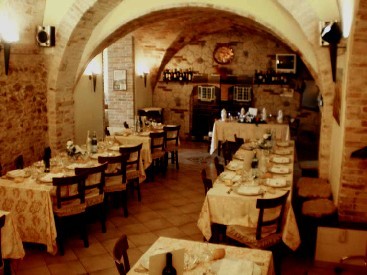 Establishment of the fourteenth century, it was born as a manger and from this it took its name and is located in the historic center. Suitable for any occasion: romantic candlelight or quiet business lunch or dinner. Possibility with fish menu booking, the food is freshly cooked and with genuine local ingredients. The menu is mainly base on the seasonal local foods.

The special tender, tasty and pulpy olive is stuffed with meat, breaded and then fried. A specialty that is eaten very well in Ascoli and throughout the Piceno area. 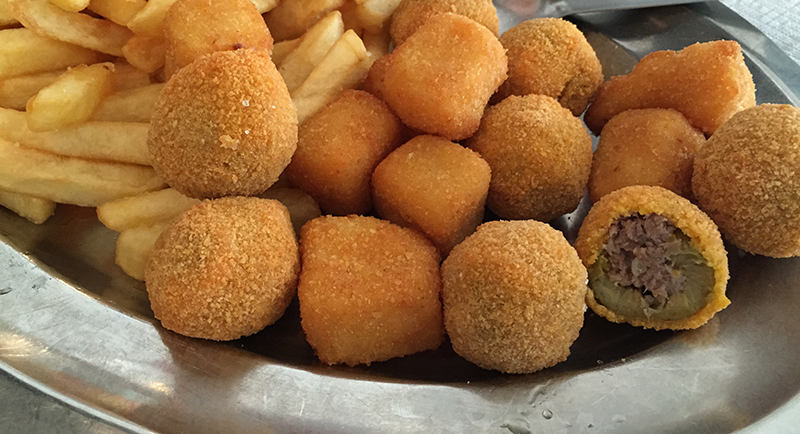 The rabbit in pork

On festive occasions of the past, when you wanted to eat some meat, the choice was obligatory: chicken or rabbit. This explains the flourishing of tasty recipes. The rabbit is cleaned and then opened the two so as to be filled with a filling. The filling is made from wild fennel, garlic, boiled pork rind, rabbit interior and pepper. 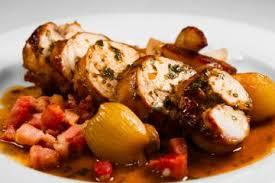 It is a dessert of peasant origin, typical of the winter period, whose recipe is handed down from generation to generation. A day earlier the dough is prepared and molded in the shape of seahorses, and filled with the filling of almonds, walnuts, candied fruit, dark chocolate, dried figs and bitter cocoa. 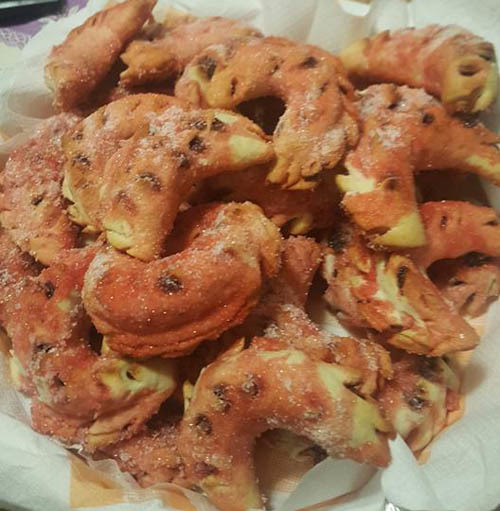